I suppose that most of the people I know have been met through fishing in some way. I am often reminded by my lovely wife that our world rotates around the pursuit of sub-aquatic creatures and that socially we seem restricted to an angling based list of functions, friends and associates. She, of course, says it rather more succinctly that that. Anyway, here's who I've spent time with of late.

Imagine a shaved Sasquatch - go on, 6'5", size 15 feet - you're getting there. Now give him a quiet and affable demeanour then sprinkle some calamity dust over the result and you are getting close to Richard. 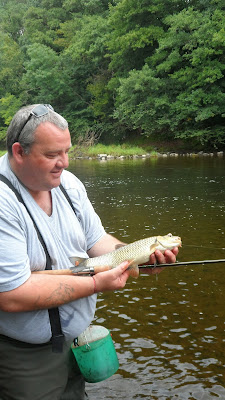 Richard stayed at the Red Lion where, before breakfast, he had spilled coffee over his Kindle, wallet, radio etc, gone to the bathroom to get tissue to wipe it up and banged his head, turned back to the bedroom and walked straight into the door. A normal procedure for one so afflicted.

I put him into a swim with difficult access but provided a rope and good wishes, "You'll probably get a quick fish there", I offered as I left him to it and I was right. After dropping the feeder in twice to get some bait in, the third drop was instantly yanked almost from his hand but the strike failed to connect! How? Well, these Korda hooks come with a little plastic point protector so, having then removed said item Richard cast again. Ten minutes late and jobs a good 'un as he caught a plump seven pounder.

The rest of the day was a struggle as it rained and cold water entered the river, I didn't even have a bite. Exiting the slippery swim at close of play was, by all accounts, a bit like watching a Manatee trying to scale a greasy slope. I found the hapless Richard gasping and bruised and looking forlorn as his brand new bankstick remained at the water's edge goading him to try and retrieve it - he didn't.

Next  morning and the day was bright, the river had dropped and Richard was to discover the joys of standing up to your nuts in a cool river whilst trotting a float. Before we began I shimmied down the now dry bank and recovered the bankstick. 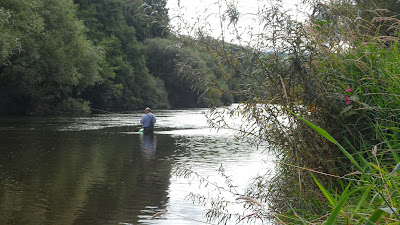 In a swim just too beautiful to describe and with a trot just too perfect to imagine Richard soon got in the swing of holding back a little, feeding regularly and hitting bites from long distance. It was a pleasure to see somebody coming to terms with a method and river and the rewards came late on when the bigger chub started to appear, we retired content with our day but during the evening Richard admitted that he had again left his bankstick behind. We decided that The Wye wanted it more than he and so it was left to the river Gods.

I've had a long standing offer to up my personal best perch on a productive lake compliments of Colin, aka Bumble who I met through the friendly and interesting Traditional Fishers Forum. My best perch to date is 2.8 but I have a curse where perch are concerned and I usually arrive at a venue just as the last fish has died. But I went and first had a night's B&B with a most interesting chap.

I would not necessarily recommend the accommodation as it was a large, old and somewhat dilapidated house with more cob webs than the Munsters place. But there was such charm in the old man who, alone is doing his bit to earn an extra bob or two as well as have some company I suppose. I immediately warmed to him and despite the very basic nature of the room I was fascinated by his history and his wonderful art. He had a breath taking marble statue of a boy that was in fact his grandfather and was sculpted by his great grand mother, she must have been extremely talented, I was genuinely moved by her work. 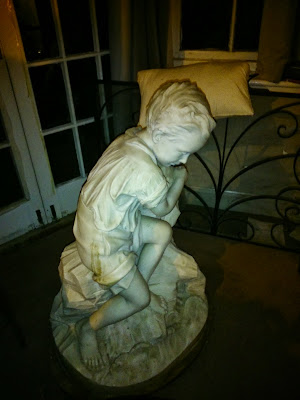 Anyway, dawn came and Colin and I set off for some perch. I collected from him my new Milward Wizard, a rod that will become an extension of my right arm I am sure. We set up either side of an overgrown gap between bank and an island and fished worm and prawns over loose fed maggots. Colin struck first. 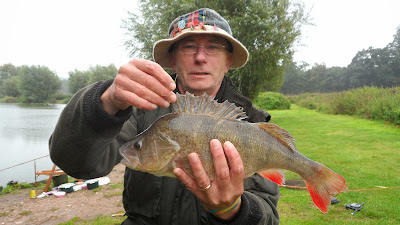 Just to rub my nose in it he landed a fish one ounce bigger than my pb. I took it on the chin and promptly landed a 2.2 but the weather became squally and placing my bait in a narrow pocket between overhanging trees on all sides led to me retackling more often that I would have wanted. I eventually settled for a sliding float in order to get all the casting weight of float, shot and bait as close together as possible and, when the line didn't stick to the wet rod, it worked well...... until I lost the float in a tree. 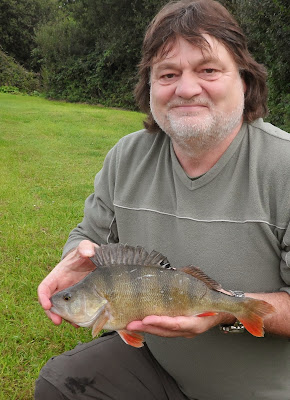 At close of play I'd had three perch each smaller than the one before, a couple of roach and a pair of small bream and had lost an unstoppable lump. It was an extremely enjoyable session made special by meeting up with Colin and I even forgave him his second perch that was also two pounds and nine bloody ounces! That along with a few more perch, roach and bream. He also took a carp on a sleeper rod and ended the day with a common of about ten pounds on his float rod, a Craftversa, which is not really made for carp fishing but it did a great job and made his wrist ache. 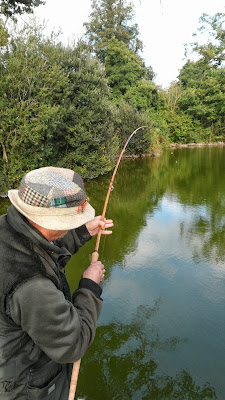 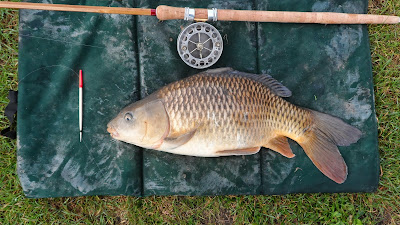