Fishing for grayling should be a gentle pursuit with relaxed fishing on a cold day, taking time out to enjoy the countryside. It should not therefore, be attritional. However, my recent trip to magnificent river Frome became just that but through the grief and grind came a moment or two of pure magic.

Day one was full of optimism and wonder at my first chance to fish this hallowed venue. I had been offered free access to a long, private stretch many years ago but, at the time was unable to take them up on it and so a golden opportunity was lost. It has rankled me for ages so here I was redressing the situation.

The weather was destined to be wet and I had forgotten to bring a brolly. No matter, I'm made of stern stuff and headed off upstream until I found a delicious looking run that screamed fish. The rain started and I chopped and changed floats to try and get perfect presentation and visibility, but never quite achieved it. I decided to move and that is when my butt ring fell off. 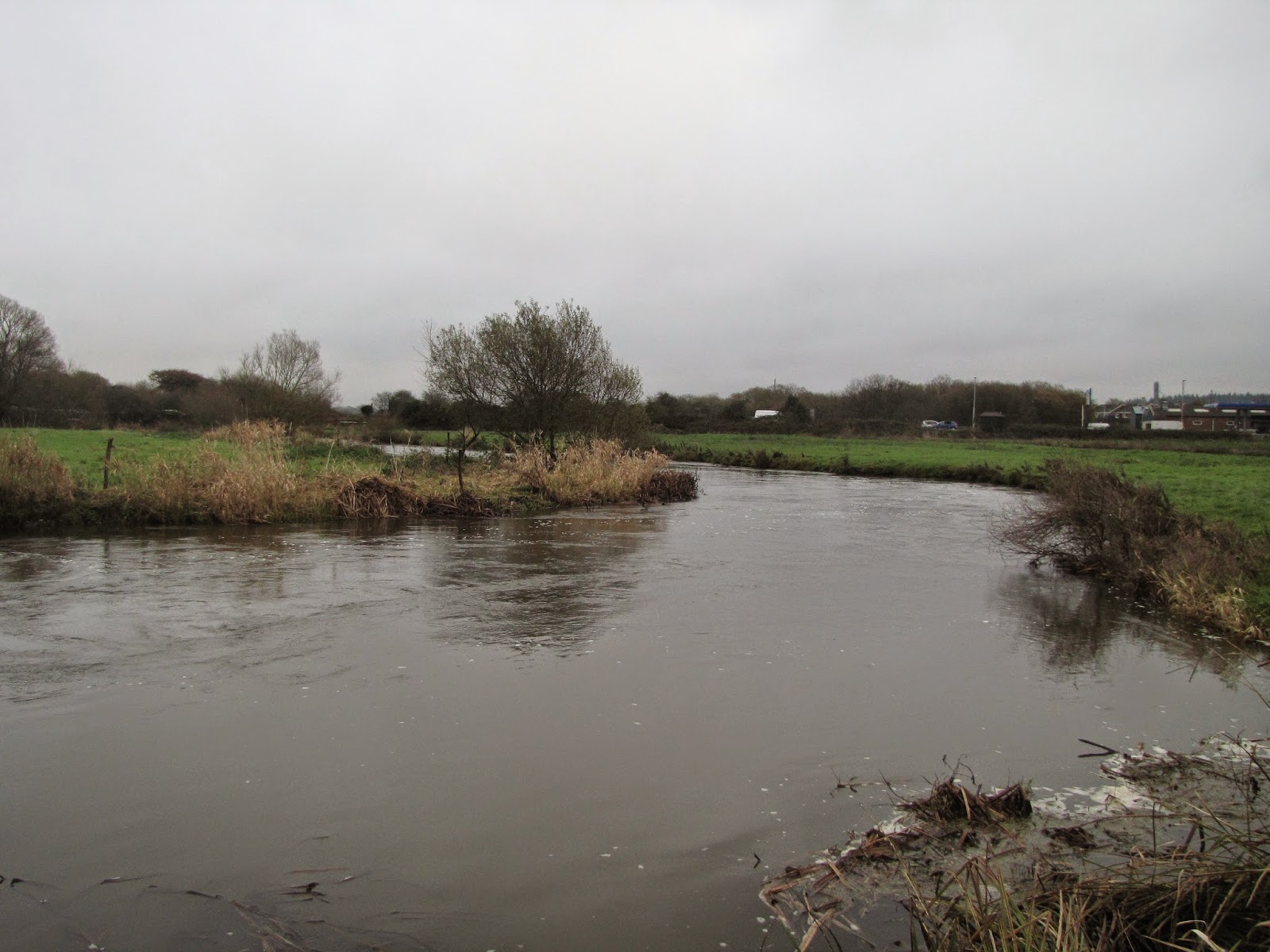 After the long walk back to the car, the drive to two garages in the search of insulating tape and the long trudge back to my swim, my sense of humour had taken a bash. The next hour saw it disappear completely. I'd changed reels to make casting and retrieving 'easier' than with my little 3" Hodder but my Speedia decided to fall in love with the line and hugged it tightly to the spool. The wet rod didn't help nor did me leaving out a ring when I set it up but that was soon rectified amidst Anglo Saxon mutterings.

I was aiming for a far bank run that would surely give me a bite but I never managed to trot it effectively. I had a lovely selection of floats gifted by my friend Richard who's guest I was but none of them was capable of bossing the current as the river had come up over the last couple of days. I stumbled from swim to swim getting into all sorts of tangles and mess and angrier and angrier with myself. It was cold and the rain was relentless. I decided to pull my coat zip up further to warm the top of my chest but it stuck. I swore and then swore again when the zipper popped off one side and the coat slowly opened fully leaving me colder and wetter.

I had seen a fish top in the previous swim and another in an unfishable spot but, when I eyed yet another good looking run I saw a grayling take something from the surface right in front of me. This urged me on and I eventually broke my duck with a grayling of about three ounces. 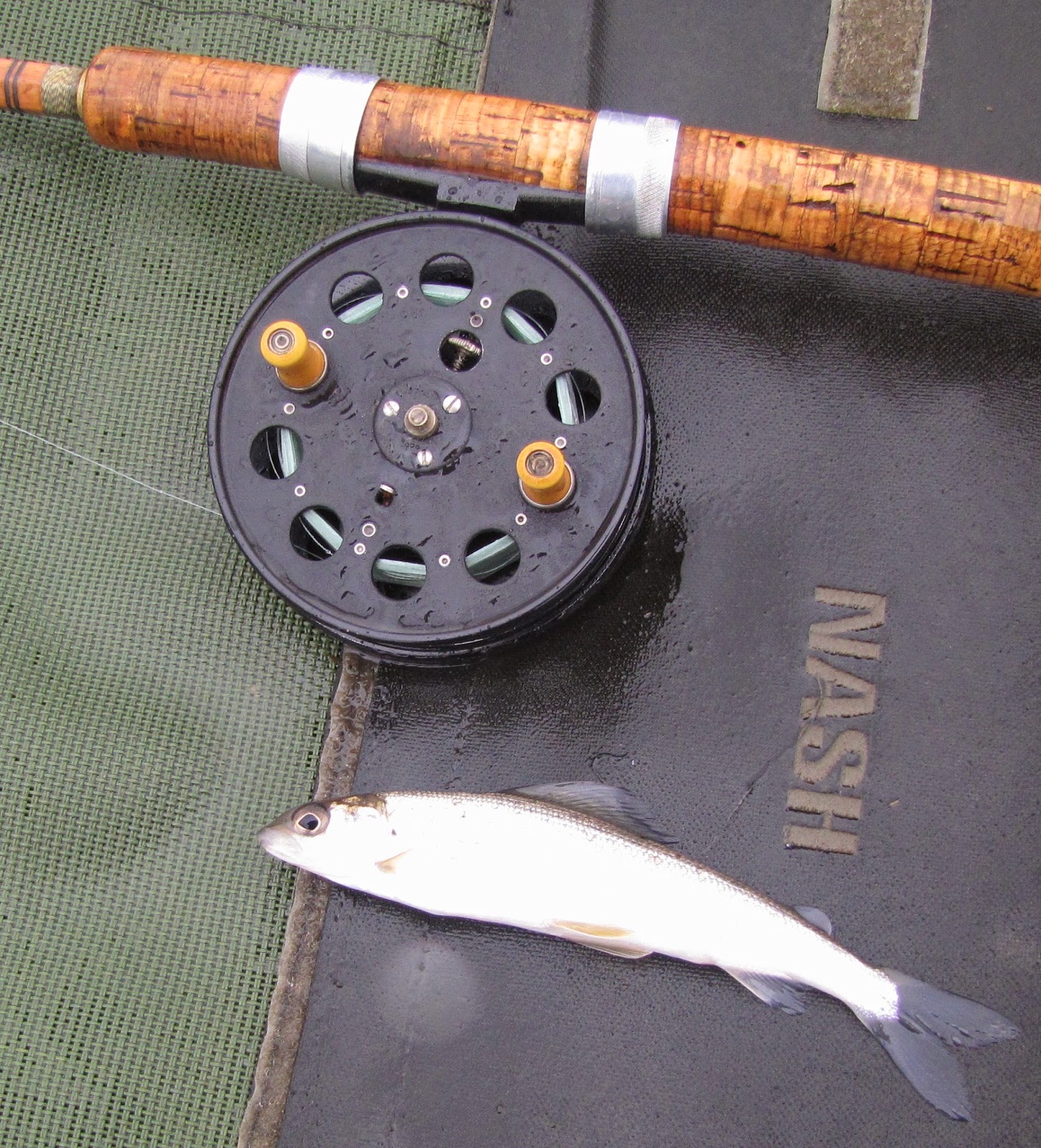 When the phone rang I was unable to answer it as the screen was wet and my fingers too cold to register on the touch screen. But it was Richard calling and as he'd left his phone in the B&B I knew he's long since given up so I quickly followed.

Day two saw us eying each other at breakfast, each waiting for the other to be the first to cast doom over the day's proceedings. But we headed to the river anyway and grimaced at the brown, turbulent and very ungrayling like conditions. "Sod it" I said, "I'm going to keep walking upstream until I find some quiet water". Richard agreed and off we set.

A few yards later we watched an Osprey fly across in front of us and disappear over some trees. It was my first Osprey in the UK and we both agreed that it must be a good omen. A few yards later the confluence between main river and feeder stream that looked bland yesterday suddenly looked perfect. "This spot is calling to me Rich, I'm going to give it half an hour" I declared. He carried on up river whilst I put my tackle together and tried to suss out the movement of the water. There was a fast run on the far bank (albeit much slower than the main river), which hit the main flow and created a long, almost dead section that eventually found its way back upstream in a back eddy. 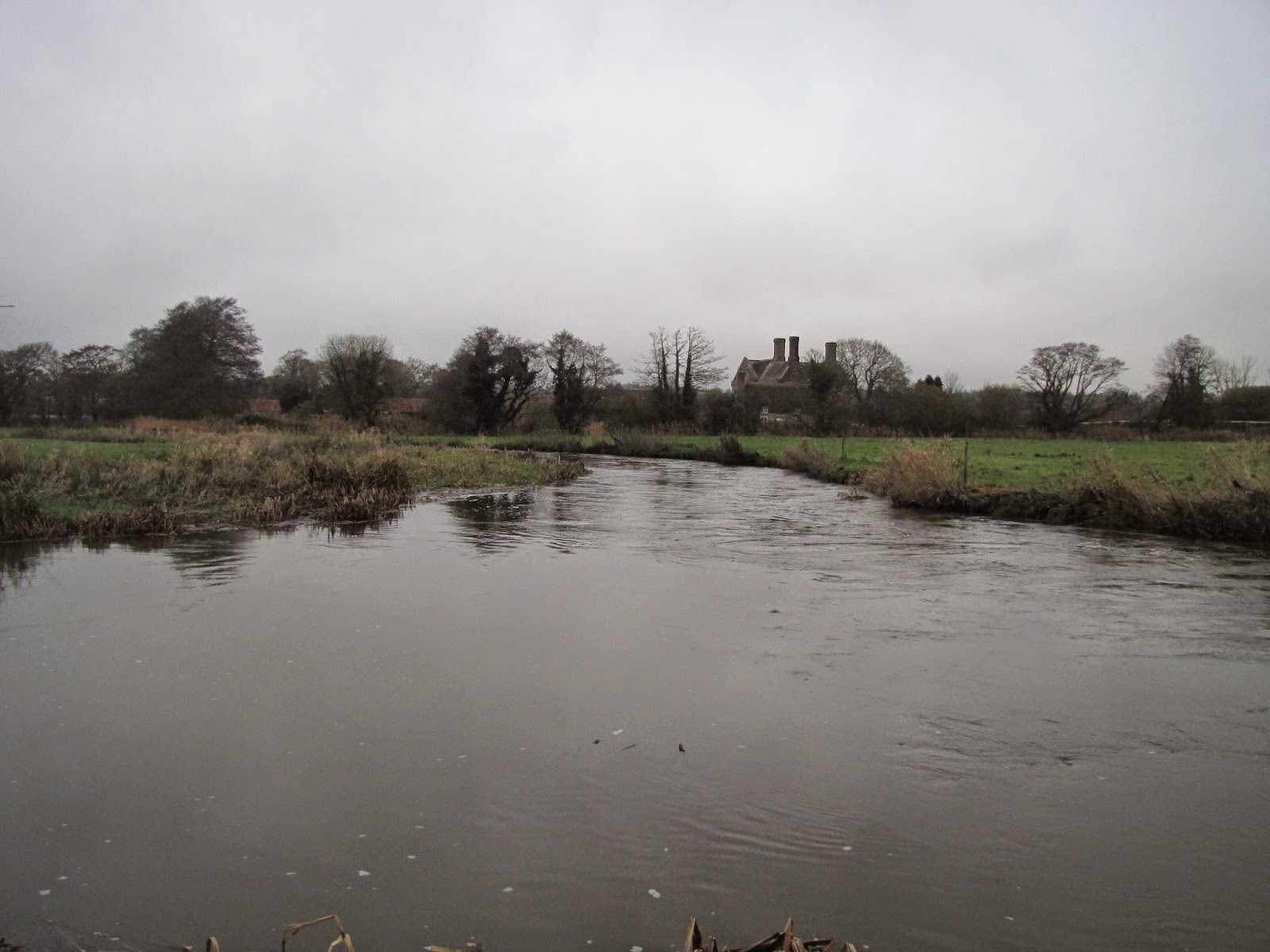 I cast into the flow and let the float trot down then around the slower water where a gravel bank had formed. I let the float drift it's way, exploring for a fish or two sheltering from the flood. It stabbed under, reappeared then slid across the surface - I struck! I found myself playing a good fish
which I teased gingerly over the net - it was mine. 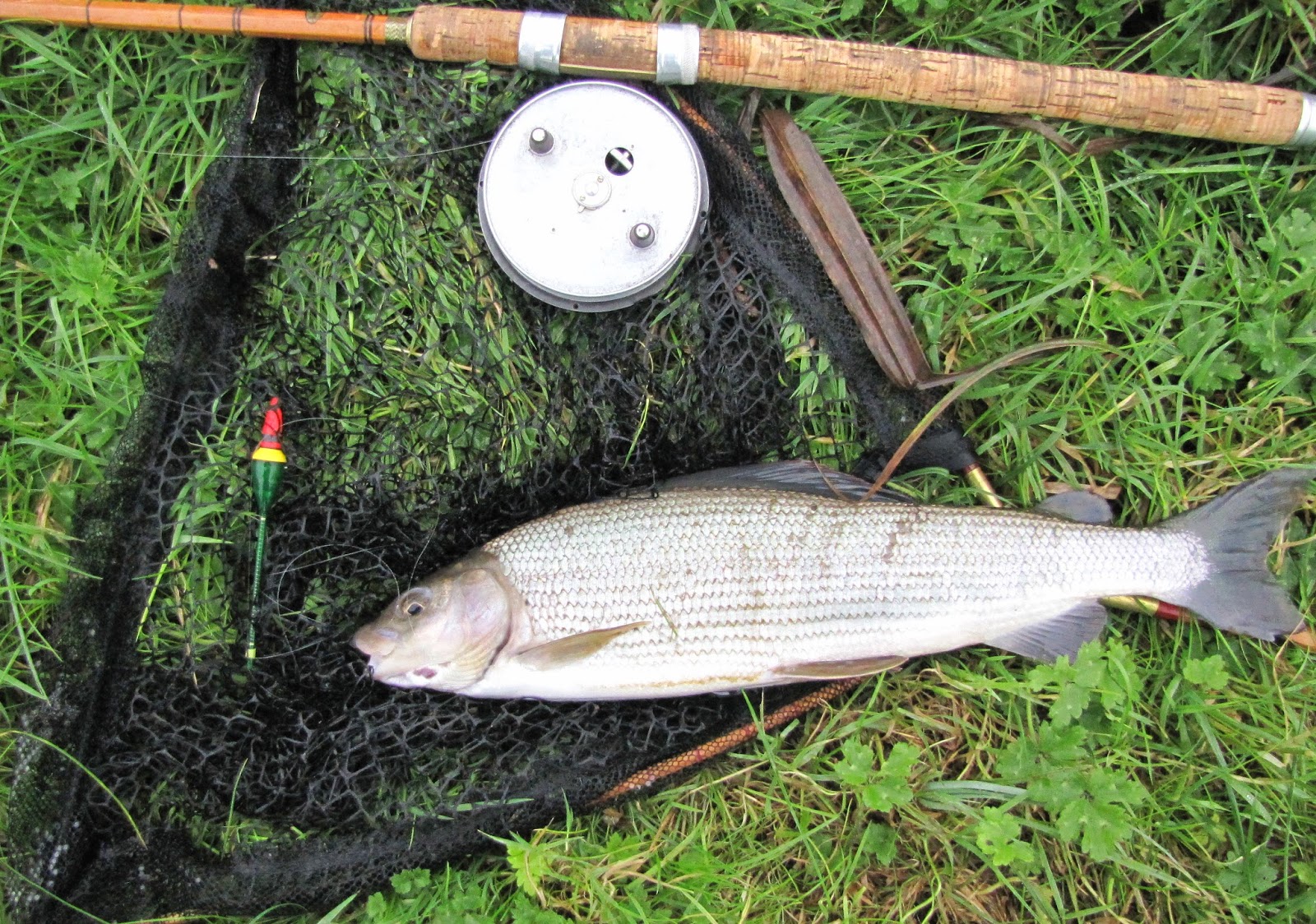 My hands shook as I slipped it into a plastic bag and onto the scales - two pounds two ounces, a new personal best and my first grayling over the magic two. I was elated and so was Rich when I rang him.

He was soon back we shook hands warmly. I offered him my swim but he politely refused. I rather suspected that there were few places that would produce today and insisted but still he declined. I stopped fishing and sat writing my diary, now Richard decided to maybe have a little go at the bottom end of my spot and, in no time at all, was playing a fish of his own. This one went two pounds three, the cad! 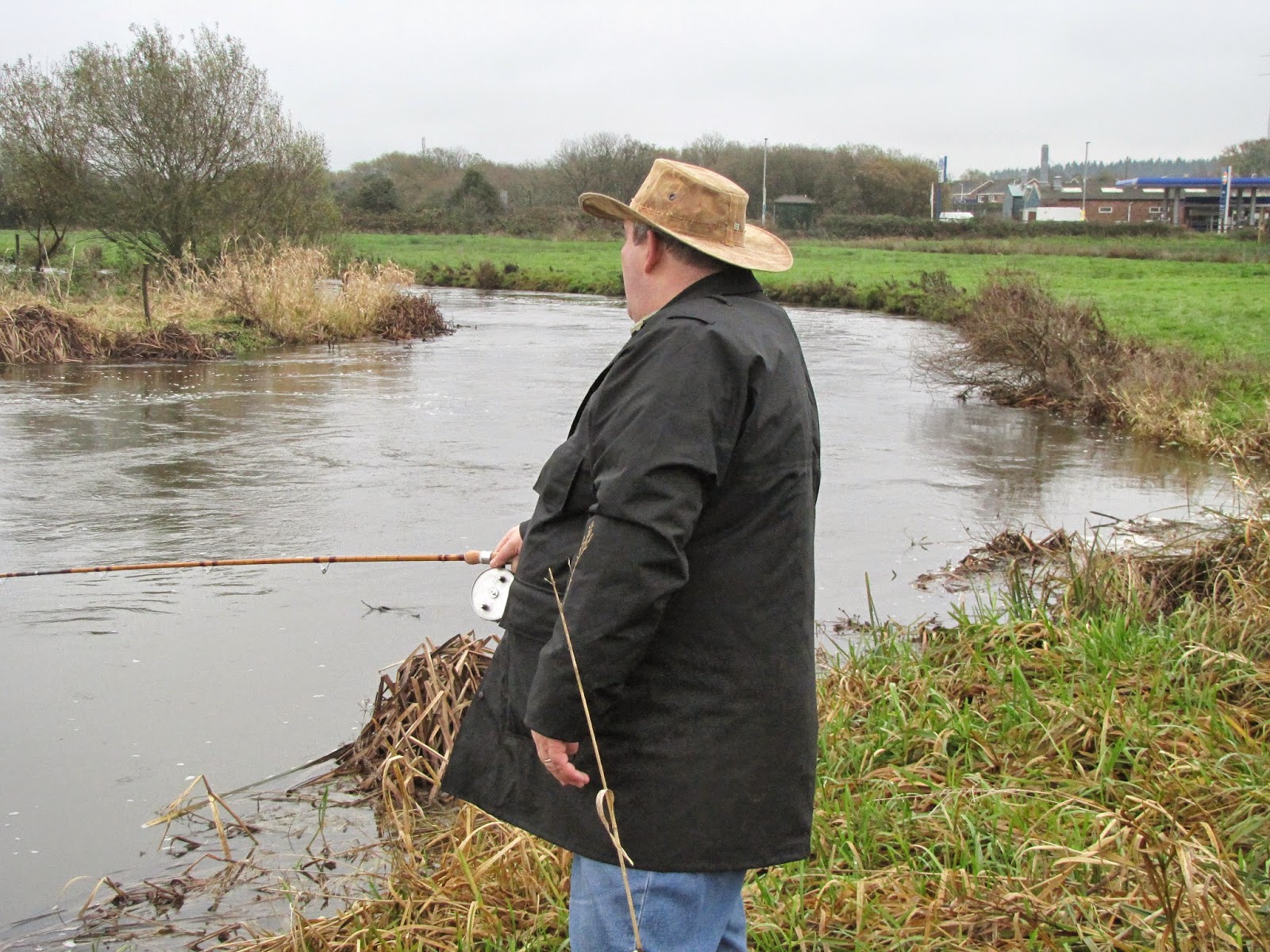 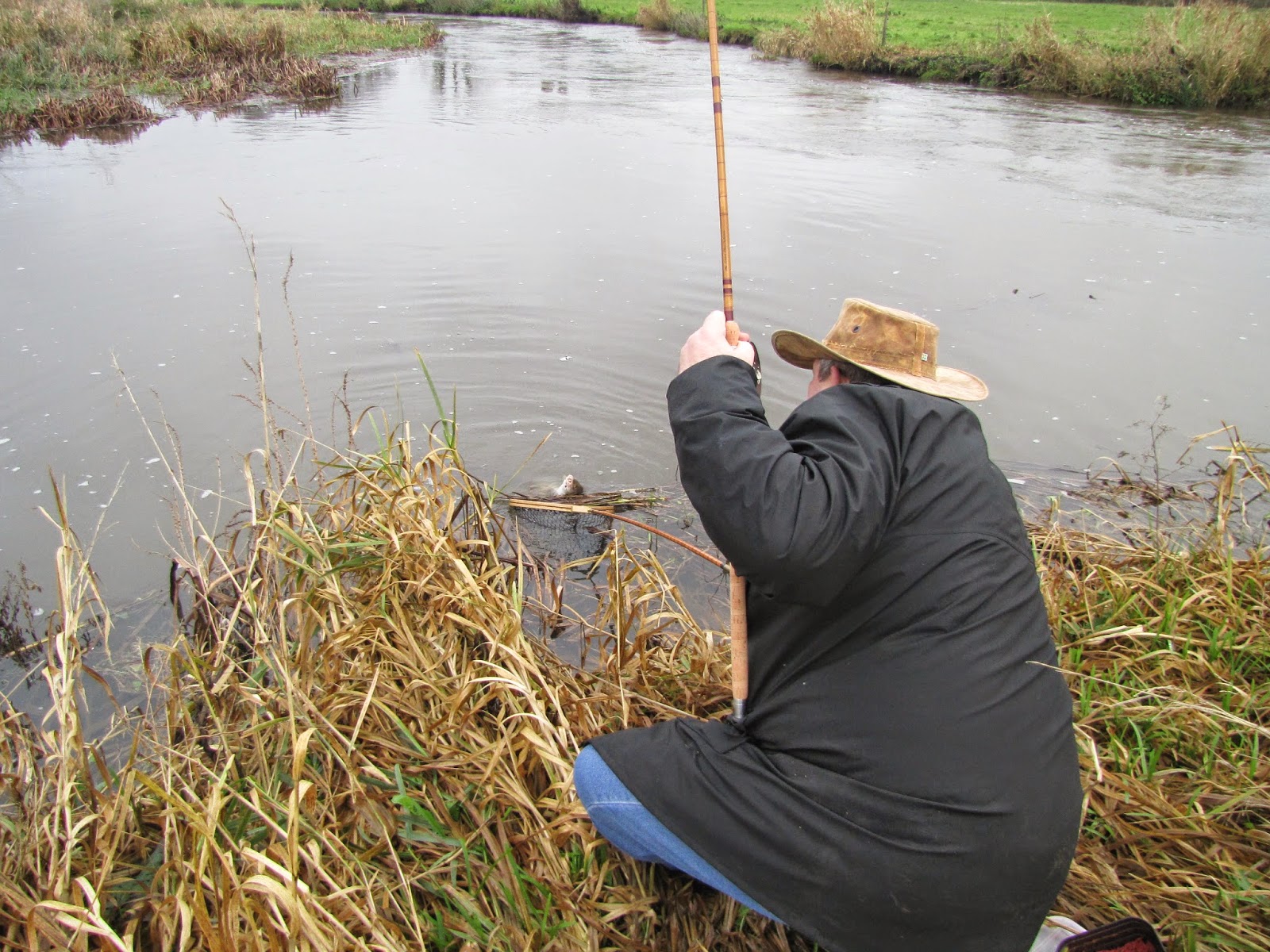 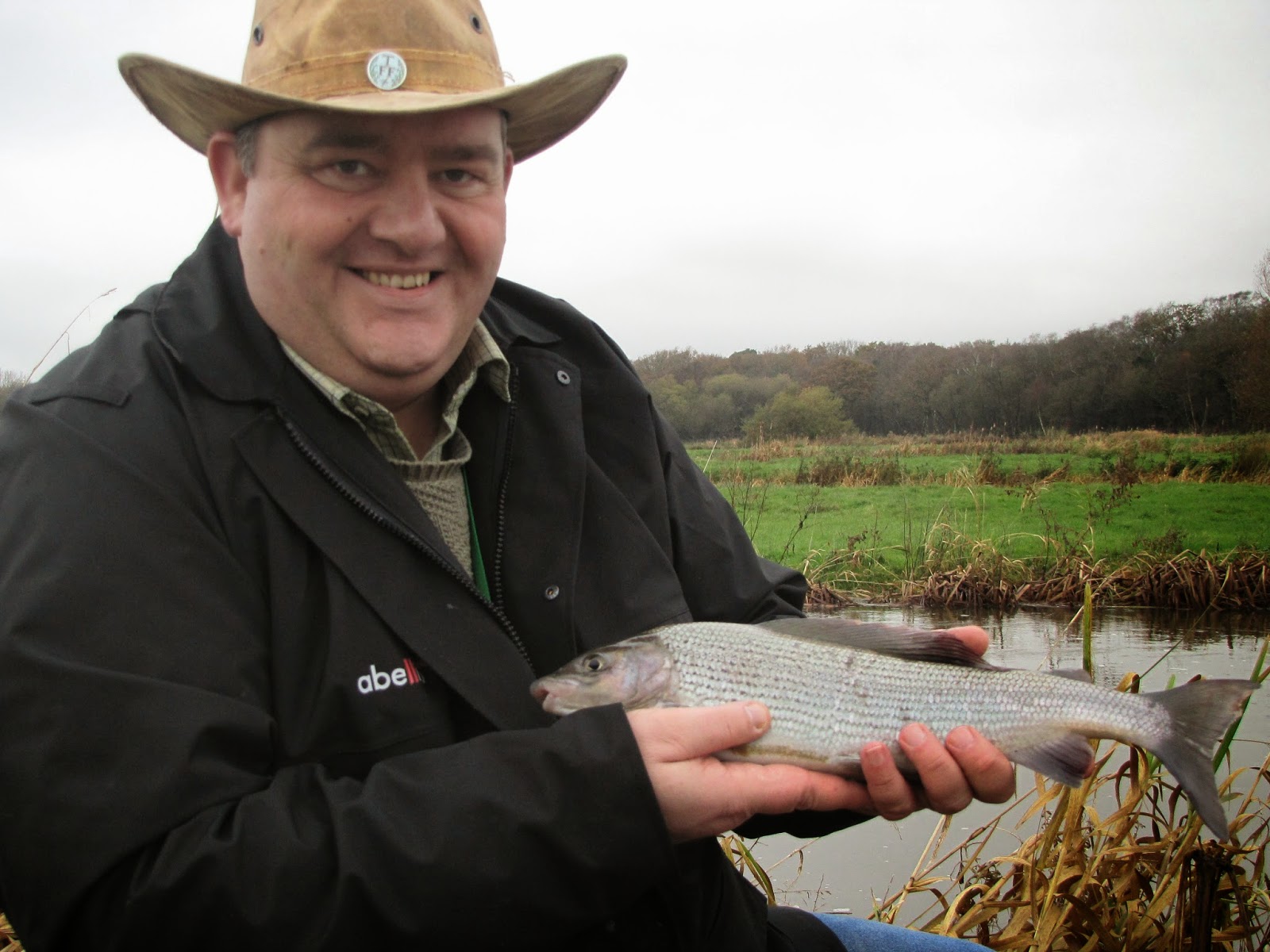 It was a perfect conclusion and although we fished on the river got higher and no more chances came out way. We packed much earlier than intended but were well satisfied with the result and know that in different conditions ....... well, maybe next year.