Apologies for the dearth of input on my behalf but its been a funny old year. Well, that's using the word 'funny' in an obtuse way but its more polite than saying 'shit'.

I'm still only fishing the occasional short session where the main requirement is a level seating position. This is a major drawback as the river has been low and the fish less than obliging in the more heavily pressured areas. I love the river when its like this and I know plenty of places where, were I able to creep, crawl or climb, then fish by squatting on a ledge or tucked in a bush, I'd be catching regularly. As it is I have yet to catch a barbel this season and have had to 'make do' with chub after chub.


'Make do' sounds dreadfully disrespectful for our most obliging fish and, although there have been times when I've quietly cursed chub for stealing a bait intended for barbel, I love catching them especially when I target them. And target them I have. Well, at least I can catch something rather than sit around waiting for the barbel to serve me up a blank.


I've been using some Questrami boilies by Quest Baits in 10mm which the fish seem to like very much indeed. They were bought with barbel in mind and my lad Neil, has proved that they work (curse him), but, as I said, the chub love 'em. I've fished a few known chub haunts and have had plenty of 3, 4 and one 5 pounder. Its always a perfect evening to be sat, rod in hand and resting on my knee or foot whilst the line is hooked over my index finger. That urgent pull and the resultant strike are well rehearsed and feel somehow 'natural'.  Give me touch ledgering over rod top watching any day.

The only adventure I've been on was a second trip after Welsh Wildies. It was a gathering of Traditional Fishing Forum members which could sound stuffy to the uninitiated. It is however, far from it. Our group was made up of a recently unemployed bartender, a Fire Brigade enforcement
officer, a teacher and amongst others, a Judge! Despite the broad cross section of society, the banter was pure fishing and lost fish are mocked by all and sundry - especially by me when I watched Scott, the teacher lose one on the Friday. I was less keen on the mocking when I lost two in quick succession on the next morning. But I stand by my decision that his was bad angling whereas mine was bad luck, an opinion shared by ..... well, nobody.

I only landed one small carp and an even smaller chub from the bleak mountain lake of Pant Y Llyn. I was fishing into the teeth of a cold and often wet wind and the fishing was challenging too. Despite our 'traditional' brief, I had to revert to a spot of hi-tech in order to succeed. I eventually started hitting and staying attached to fish by presenting my bait just above the soft weed that carpeted the pool by using a small grain of pop-up corn attached close to the hook shank. 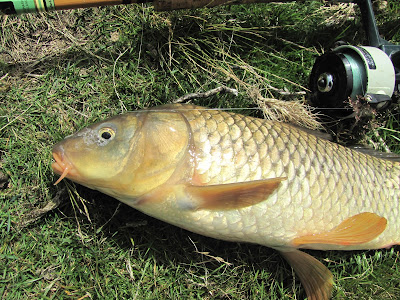 I didn't stay very long and didn't stay for the second day when I would have had another stab at Llyn Gwyn. Instead I returned home which was fortuitous as my mother, who's been under our care for the last eighteen months or so, had taken a turn for the worse. And that's what has absorbed my time since. Fishing has rarely taken such a back seat in my life.

I know that this run will end one way or another and I shall be back on the banks with renewed vigour and hopefully, a few fish to write about. There is rain forecast and the river will spring back into life. We shall then enter Autumn and the peak of the season. Fingers crossed I'll have the line crooked over my finger as the evenings begin to chill and the fish seek to put on weight.