Usually, when I'm not fishing, I would spend a lot of time maintaining my gear, change line on the reels, sort the hooks and shot back into some sort of size order, that kind of thing. However, I just don't seem to have done that of late. This has made me lazy and, for example, I've grabbed a reel just because its got what looks like the right breaking strain line on it rather than its suitability. Most unlike me.

In fact, the only notable kit maintenance I recall was when I was presented with a 'stuck' landing net handle. I'd bought two identical ones and mine was still fine but Neil's had jammed solid. He has less patience than me... or anybody really, so I swapped, heated the twist lock and free'd it up. I did have a small fire but felt happy that I'd done the job to my usual low and sloppy standard.

Using a mixture of kit that came readily to hand, I've had a couple of brief adventures this month that have rewarded me with two modest chub on trotted bread and a blank.

I did have a weekend trip planned on a venue that I've been eager to fish for some time. Its one of those special places that you may only fish once in your life but which fills your thoughts and dreams by an inordinate amount. I shall say no more at this juncture, not until I make it a reality and alas, it won't now be this year. I had a 'test' fish today and it has confirmed that I will have to put Shangri La on hold.

I was a little adventurous in my choice of swim today but felt that I had to test my resolve. The 'special place' would involve a long drive, late night and little sleep followed by a day sat in a fishing chair. Such lengthy activities are still a bit far off which was further underlined by today's effort.

Nonetheless, I picked a swim that I felt was right for the conditions and fed it with a mixture of various soaked pellets and some small Questrami boilies. I spent a few minutes taking the wee-wee out of a couple of mates (like you do), then settled down to fish. My first cast lasted about fifteen minutes. 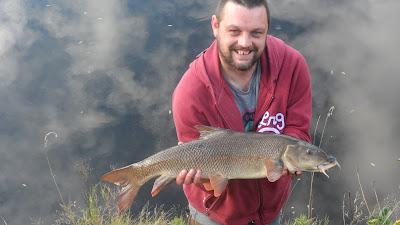 Neil arrived from his swim downstream asking for the scales. I duly ascended the north face of the Eiger and took a few pics of his nine pounder. Back I trudged, through base camp and a long descent dodging avalanches and angry natives to make cast number two.

Three minutes later and I detected a movement on the line, the strike was pure instinct and, I hoped, not too soon. It was perfect and a powerful fish ran hard downstream. My rod was right around and the old '66 gave line noisily from it's wonderful clutch. I turned it but it was hell bent on reaching Chepstow. But, continual pressure and some dogged heave ho'ing had it in the net and it was my turn to disturb the Boy - which makes a change. 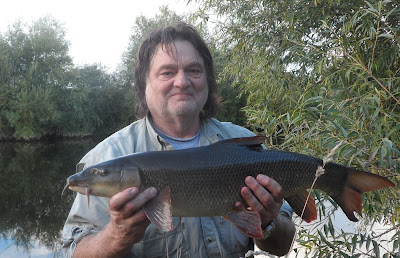 At just over nine it was my first barbel of the season! Ah well, its not a bad average I suppose. I lowered it in the net to release it when there was a faint 'snick' and the landing net handle broke just where I'd had the fire.

With Neil's help it was returned safely and the net recovered. And so ended my session.

Nicky was surprised by my early return but was pleased by my capture and amused by the net fiasco. Ah well, looks like I've got to catch up on some tackle maintenance. 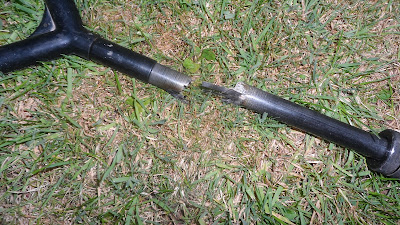