I always have mixed feelings about my first overnight session of the year. I came late to the bivvy and it has never been easy to get myself into a routine, I'm bad enough changing my kit bag from barbel fishing to a day's trotting or carping so organising a session makes my brain hurt. It's not what I will forget more a case of 'I hope it's not important'.

Rain was due so I took the two man bivvy I've used in France. I like to spread out (untidy) and I had Cane, my fishing dog in training, with me so I didn't want to be too close to a wet mutt. I set about wrestling with my green marquee and immediately remembered the little, threaded end piece to the pole that fits in the side pegging point of the tent. Yes, it was important, that's why I had spent so long looking for it a couple of days ago and why I left it with my small change where I would not forget to take it and...... what a plonker! Having bodged a semi-secure fitting with several pegs (none of which I could bury more than 3"), I then recalled my last trip with this bivvy and the clip that came off the tension belt..... that I'd forgotten to replace. Going well so far.

Too long later I was ensconced in my swim, hot, tired and a bit frustrated. I put the kettle on and heard a heavy splash well along the bank from me. I noted it but did nothing. I was not in the mood to go creepy crawling about through heavy undergrowth, I just felt like taking it easy. I was not pleased at my sloth but accepted that today was just not that sort of a day.

I'd chosen this swim as over the previous few years both my son and I have taken some good fish here at this time of year but had also experienced a few recaptures. One big fish in particular had come out on very wet nights and, as one was forecast, I wanted to see if the old routine was still in place and just how big the known fish had become. Not that I want recaptures but they are an unavoidable fact of fishing and it would help fit a few pieces into the jigsaw. I baited a couple of spots an underarm flick from the wooden stage ( I hate fishing from wooden stages but it's that or wade to cast), all was set.

I watched the water, read and generally passed the time before coming over very tired. Gone are the days when I could sit by my rods all night, reacting to the slightest twitch of my silver foil bobbins, I need my sleep and I was just dozing off at around midnight when I was up and doing the Delkim Dance as I waddled to my rods and leaned against a good fish heading to the right.

It put on an impressive display and made a lot of short, fast runs that gave the impression of a modest double figured fish but, as it rolled into the net I had a grin on my face that showed it was a much better specimen. At 27.09 it was an excellent start. I quickly weighed it and took a snap shot on the mat before slipping it back. I then recast, hopped into my bed and shivered for a bit, it was a pretty cold night. 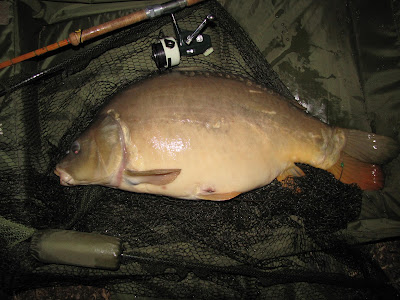 The buzz of the activity soon drained and again I was dozing off when Bleep b... bleeeeeep...!, I was in action. This one was hooked to the left in very shallow water and was beating a hasty exit toward the centre of the lake. Again it was a fun few minutes and a 23.10 was having it's mug shot taken. I was now feeling knackered and when I saw that the hooklink had tangled with the mainline I just lobbed the rod against a bush and got back into my pit. Sleep at last. 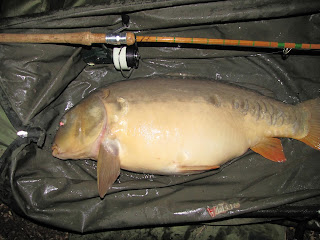 Not for long though. A 3am call had me wearily stumbling around wondering where the on switch to my head torch had gone. It was on upside down but, with a rod bent and a clutch buzzing, I managed to sort it out and regain a modicum of composure. This fish had way more power than the previous two and, when I eventually stopped the first run with the fish fast approaching the next county, I uttered 'This is what we came for' to myself and instantly felt guilty for my attitude. I'm not just about 'cachin' firties' as one hears from many of our modern day carpers (it's probably all, about forties or fifties now), and I enjoy every fish that puts a good bend in my cane but when you are on a water with a growing population of fish it's what defines the day. I really don't like it but have to sort of accept it.

This fish really did beat me up, it ran in every direction even taking a quick look under the platform which I was none too pleased about. I bought a landing net a while back that has a small floatation thingy on each arm rather than those that have one on the handle. Its brilliant! You just stick the net in the water and the handle against the bank, platform or whatever and it sits perfectly allowing the fish to be drawn over it. This fish was over said net and I allowed it a little line, it obligingly dived down into the mesh and was mine.

The routine of sorting out the sling, matt (new cradle - very posh and efficient), scales, and camera done I removed the net from the handle, rolled it up and lifted, with a grunt and a twinge in my back, the fish out. I'd bitten through my main line rather than have to lug fish and rod to the matt. It went 30.5 and was again just given a quick snap on the matt rather than faff about with a self take. I don't like sacking fish and figured hey, its only just over thirty. My god, I've become a monster! 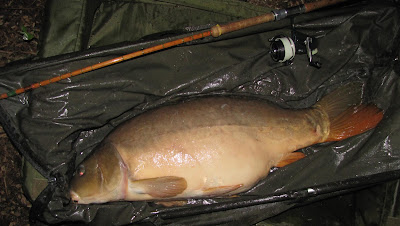 When I moved to the Wye my biggest chub was a single four pounder and not much over the four at that. Within no time I was slipping big fours back with barely a second glance and nowadays I wonder just how many five pounders have received such a perfunctory glance before rejoining their shoal. It's just that we get conditioned to the fish we catch and were I to punch the air and do a cartwheel every time I took a chub that for many would be the fish of their season on their water well, I'd look a bit of a tit. The fish I had was only my third thirty from the lake and my fifth all time carp over that figure. I never thought there'd be a day when I could sleep after such a fish never mind what I did next but its just where I am at the moment. I felt a bit unclean and ashamed that I had not been more excited and I also felt that its capture had felt just a tad too easy. Fishing can be a right old mind fuck and I was feeling a bit confused.

I was also extremely tired so having slipped the fish back I put the rod next to the other one in the bush and decided to just get some sleep. I am certain I could have caught more fish but it no longer mattered. Three fish (all new to me) was a good night's work.

I was just about slipping into the black void of unconsciousness when my eyes popped wide open. Shit! Did I take the hook out? I realised that having bitten the line I didn't recall removing the hook. Oh no, I've tethered a fish. I leapt out of bed and checked the landing net...... there it was, my rig, lead and tubing all sat entwined in the mesh - phew!

Now I can sleep. 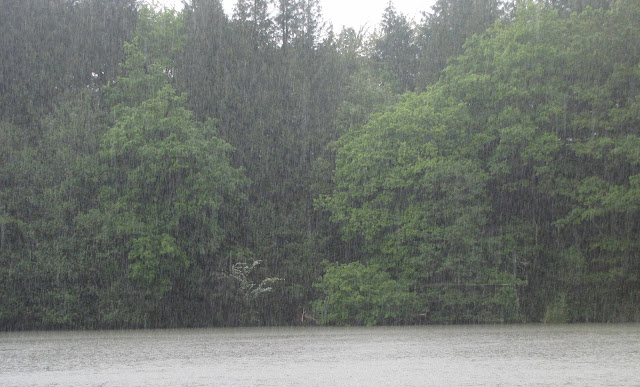 The morning was horrible. Rain coming down in stair rods, the dog barking at everything that moved and a few things that didn't and then sneaking onto my bed whenever I looked away. I read a BB book I'm borrowing from a mate. A fairly short book called At The Back O Ben Dee about three kids adventuring on a Scottish Island on their holidays. It's a mini Brendon Chase in many respects but I love BB's writing and this is another gem. When that was finished and on a slightly different tangent I enjoyed Charlie Brooker's 'I Can Make You Hate'. Ah diversity.

It got very cold again and the lake was as still as glass. Something startled the Canada Geese in the small hours which, in turn, caused Cane to go bonkers yet again but nothing came close to either bait and the lake that had felt too easy 24 hours before had redressed the balance. And I really appreciated that.

The last bit of action, apart from going another ten rounds with a bivvy, was getting my 4x4 stuck on the way out of the field. The heavy rain had caused the clay to swallow my wheels down to the axles.
Luckily I carry some plastic strips that, when placed under the tyres, will get you out of most situations even in a two wheel drive car. They are a god send. However, mine were in the tyre well of the boot, under a ton of kit that had to be unloaded first. 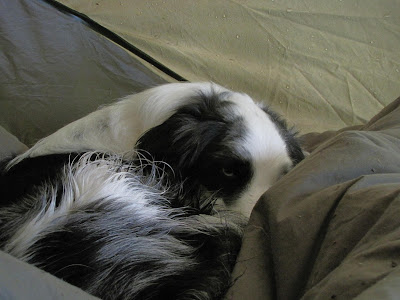