Remember me? I'm that bloke who was all fired up about his carp fishing during the spring. Well, in usual Burr fashion, it's all gone tits up. Here's why.

I don't mind blanks, in fact I embrace them as a water that becomes too easy quickly loses it's appeal. What I do resent is being able to go and blank or even catch, when I want to and these last few years has seen many forced lay offs. I did it again in May. The dreaded back problems as well as some very painful knee issues with sciatica, saw my fishing curtailed once more. I was up for giving it a go, fish my way through the pain barrier and all that but, with a special holiday approaching, we had an adult conversation, discussed the options openly and fairly and I was told not to be so bloody stupid and that I can fish any time but "not now you plonker".

Recovering enough to actually travel, I eagerly anticipated our three weeks in Florida. It was our 40th wedding anniversary whilst we were away but even so, a travel rod was packed and Internet planning had been done.

Before you think I'm going to go all gooey about my long, long relationship with Mrs B (we met 44 years ago!), I'd like to add that I view long term relationships more as a lack of ambition than an accomplishment - but I don't say it when in mixed company for cowardly reasons. 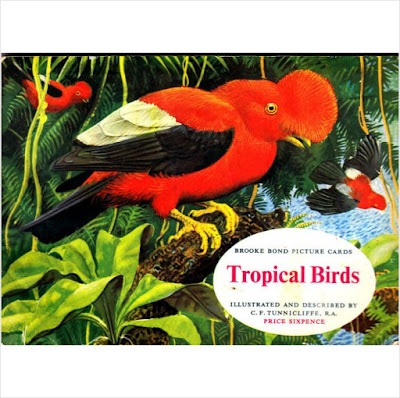 Please indulge me for a while as I dwell on my childhood. It's the early sixties, we lived in a shoe box in t' middle o' road - okay, not quite but money was short with a capital 'S'. Our pleasures were simple back then with collecting the cards that came in tea packets being a favourite. The smell of a freshly opened packet of loose leaf tea and the search for the hidden card really were exciting especially as (or maybe my interest was sparked by) the subject matters were always so dear to my heart. Butterflies, Fish and Birds were collected and stuck into the little book you could buy to accompany the set. Collecting the full set was generally helped by me being an absolute whizz at flicking cards to get 'nearest the wall' during school playtimes.

The fish were always my favourite but I was interested in birds long before I owned a rod and one set we did complete was the Tropical Birds one. These colourful and weird creatures enthralled me but one in particular stuck deep in my psyche. Much later I saw them on the television and always dreamed that one day I may see one in the flesh but, due to their living deep in the southern hemisphere, I figured I had more chance of seeing a dodo. More of this later....

Another childhood treat was watching the Deputy Dawg Show which, if you've never seen, I heartily recommend a spot of YouTube research. The lead protagonist - Muskie - the muskrat - would often be found with his short sighted friend Vincent Van Gopher, down at the ol' fishin' hole. To a lad newly obsessed with fish and struggling to learn the complexities of upping my catch rate of minnows, this was the stuff of dreams. Bunking school and yanking out a succession of sizeable catfish was to me, simply mouth watering. I have always wanted to catch an American catfish. I've seen plenty, shared an exchange with one whilst snorkelling and tried and failed before but the hankering lingers.

This then was my side issue for the holiday. The Universal Studio's parks, plenty of shopping, wildlife expeditions and some fishing - a proper holiday. It started well in that despite Nicky feeling a little groggy after the flight and developing a dry cough on day 2, we still paid a visit to lake Tohopekaliga or Toho to the locals. I've caught bass there before and decided to start my fishing with a spot of dabbling for pan fish. Canadian Night Crawlers were purchased - lobs to you and me.


Despite the advice that pieces of worms was the way to go, I could only get bites on whole worms fished paternoster style. I hit just one and landed a blue gill - my first so a pb. I avoided the Wood Storks that surrounded anglers just waiting for the opportunity to steal fish or bait. The bird life was especially good with limpkins hunting apple snails, osprey diving, roseate spoonbills, anhingas..... so many birds..... and a few gators too. 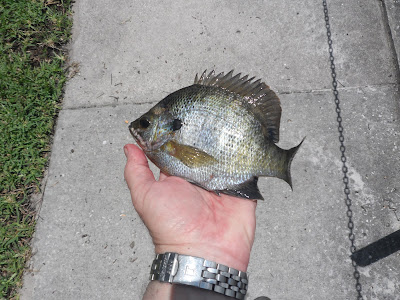 All was well in the world ........ then Nicky started to look a little peaky, so we found a doctor. Her temperature was 103 - Yup, that'll take the shine off your day. She spent the weekend in the hotel.

Come Monday and I was at the car, lobbing our bits and pieces into the back prior to taking Nick back to the docs. There was a loud slap of flesh meeting carpark and Nicky had collapsed whilst climbing into the car - catching her foot in the door jamb as she did so.

Fast forward to the end of the week and Nicky was released from hospital where she had been treated for influenza, pneumonia and a broken foot. We decided to remain and do what we could with the holiday but obviously, this was not going to be as planned and our priorities were altered.

It was near the end of our stay when I next threaded line through my rod rings as I lobbed some stinking shop bought concoction for attracting catfish near some bridge supports. It was over 100 degrees and I was getting burned through my T shirt. The undergrowth around me hid a million snakes and alligators - well, I heard a small gator on the far bank - and..... yes, I had a slow pull on my line. Could this be it? Could I finally get my catfish? No. An airboat - the loudest vehicles in the world - landed right next to me, the wash added nearly a foot of water to my fishing area and, when it subsided, it took with it my tackle box, camera and bait. I got most of it back and yes, the camera still works but I had no usable bait, I was hot and my enthusiasm was....... well, guess.


And so endeth my catfish hunt. With one thing and another, I cannot see us returning to the States in the foreseeable future so my simple childhood dream must live on and probably die with me. Nicky can now get about with a stick and, I'm not complaining you understand, I shan't be pushing a wheelchair in 100 degrees any more.  Mind you, it did get us to the front of a few queues.

As far as holiday/fishing adventures go it fell below expectations but we still did plenty of cool stuff, saw many interesting bugs and animals, even a horned toad hunting outside the hotel one wet night.
The bird life continued to astound with too many to mention. However, and we need to return to me as a youngster just for a moment and my Brooke Bond set of cards.

We lay on Cocoa Beach awaiting the impending, albeit delayed, flight of the new SpaceX Falcon 9 rocket, I sat up with my jaw well and truly dropped as a Frigate Bird, the bird I had wanted to see for over fifty years, passed overhead. It's sharp profile and 7' wingspan make it an easy spot but what the hell was it doing there? Turns out there's a small and somewhat fragile colony breeding in Florida and we just happened to get a couple of sightings whilst waiting for every bird for miles to get the shock of their lives. Fantastic!

The rocket was less impressive. Compared to a shuttle taking off it was like a Learjet next to Concorde but hey, you can't have everything can you.

I'm home now. It feels bloody cold but everybody is saying that after the heatwave and it wasn't just us that flicked the central heating on last evening. But the rivers are low and enticing, the carp lake will be full of weed and equally alluring and I am making yet more plans to visit them all - very soon. I'll let you know how it goes.