You would not believe the size of the spider that I evicted from my left wader boot. I haven't worn them for ages so my arachnid friend had doubtless considered it her home for life and I'm sure I heard a little spider curse as she hit the porch floor. Hey ho, my need is greater, it's the order of things.

I was heading for the Wye and attempting to lure my first barbel of the summer. It was not my first trip though. That was an evening sat behind a float in some deep, still water that resulted in one missed 'dip'. Stupid place to fish really but I just fancied watching a hypnotic red tip for a while. 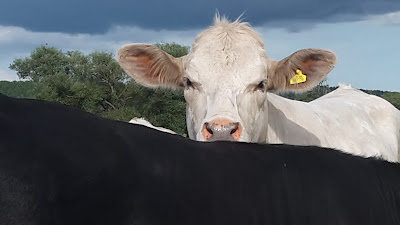 Then I went to the Teme and had a chub first cast. This early success was followed by a long hot day searching for barbel that resulted seeing in nothing but chub. I had another out of frustration rather than need and gave up - for now.

On the Wye I had a couple of nice chub on rolled meat followed by a few more sat in a favourite old swim. Seven fish in all, a pleasant evening and much like old times marred only by losing a weighty barbel that simply came adrift from my barbless hook. It was most likely foul hooked or caught around a fin as they normally stick once you've got them. The next visit was one where I wanted comfortable fishing so I returned to the same swim without the effort of roaming and rolling beforehand and, I had another seven chub. I didn't net any of them, just beached them and flicked the hook out before they splashed back to the deeps. 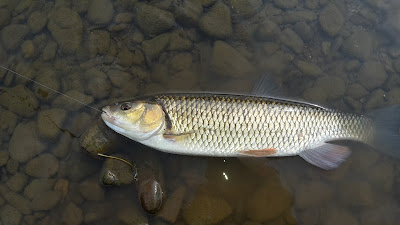 Yesterday was a trotting day. It's quite apparent that the barbel want a moving bait in these low and testing conditions and there's no better way of presenting a bait than below a float. I fed a mixture of hemp, pellet, chopped and whole boilies in a light trickle through my chosen swim. I had a pull on the drop from what felt like a chublet and one suspiciously quick dip of the float but, after an hour and a half, I decided to go for a wander to another run that had looked really good when I passed it on the way up the fishery. 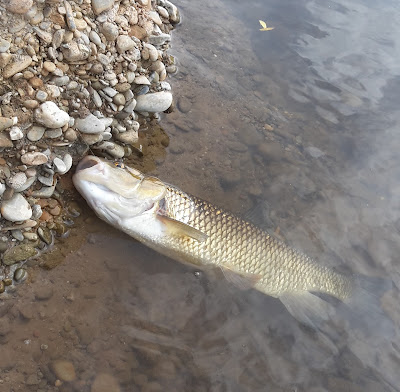 When I got there I found Neil fishing it and he promptly landed a small chub to wave under my nose. Never mind. My shoulder ached so I went looking for somewhere to sit behind a static rod. The barbel will have to take a stationary bait or maybe I'll get another bunch of chub, I didn't mind which.

I eventually settled and fished over the bait I'd been feeding earlier, it seemed common sense and it is a good swim - when they are in residence. Somewhere between going for my wander and my return I had managed to lose my prescription sunglasses. Bugger! I've new lenses on order too. Ah well, there's another set of frames to fork out for as well - bugger again.

Out went my feeder with a long combi hooklink and a bit of boilie on a size 12. I sat back for the wait when zzzzzzzz! The clutch screamed and I was promptly into my first barbel. Only a scrapper but it put up a great struggle. Satisfied, I relaxed and tried a different boilie that had been doing the business with the chub. Nothing. Nearly half an hour passed without so much as a knock. Given the early success I figured I'd either spooked the shoal or needed to change something. I changed bait back to the original and within minutes was landing number two. 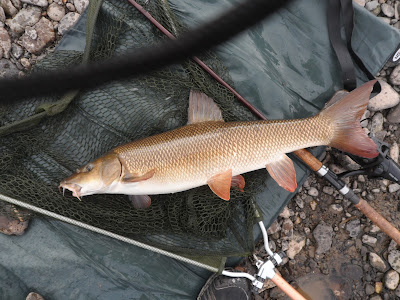 My boilies are all from Quest Baits and have worked well for both carp and barbel and let's not forget the chub of course. But the winning bait yesterday was a new one to me on the river so I'll experiment a little more before either giving up an edge or sending readers down a blind alley.

I sat back and relaxed. For the first time in a few years, I've been fishing the river quite intently and watching the rod tip like a hawk, getting the old mojo back. Tonight though, anything picking up the bait was going to scream off so I sat and read a bit of Favourite Swims by Fred J Taylor. It's a great book and was chosen for my bankside reading for it's pithy chapters and Fred's solid views on the sport. 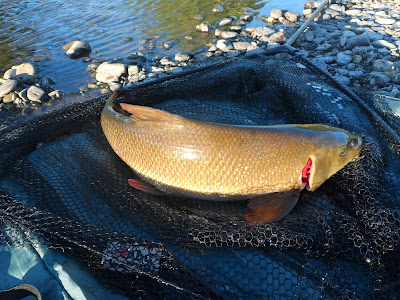 Fred was discussing the 'modern trend in barbel baits' with their sausages and cheese. I smiled at the irony of my choices of boilies, pellets et al. The rod went off again and a seven pounder was landed. Fred was then describing a blow by blow account of playing a double figured fish when again, the rod screamed into life and I landed a fish that probably nudged over eight pounds. It was very pleasant - just like old times really. 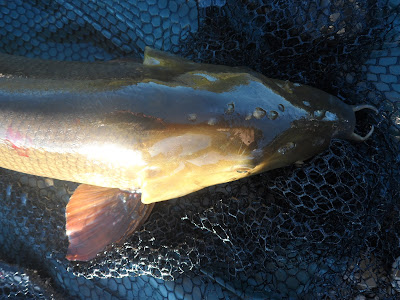 One point of note. All of the barbel had Argulus or river lice on them, a sure indication that they are not moving about too much in the hot weather and low water conditions. Come the first flood they will all but disappear. 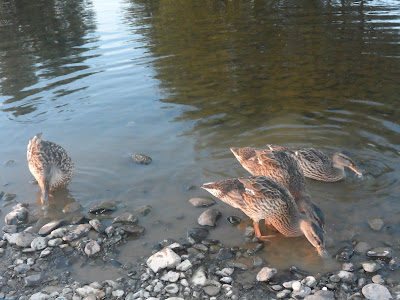 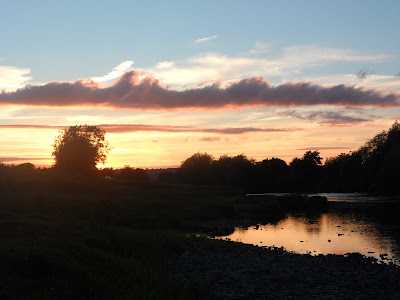 Then it all went quiet. I fed a family of young mallards and even tempted their mother to trust me enough to join in. An egret flew back and forth, it's silent flight almost owl like. I watched yet another glorious sunset, packed up and sat with Neil for the last half hour of light. He had moved and was catching chub regularly and it was a very pleasant place to be.

Hang on. Was that egret wearing my glasses?