Taking Leave Of My Senses

Welcome to another year of my angling life.

Looking in my diary it's been well over two months since I last set foot on the banks of the river. That was also the last time I landed a fish as the one other trip after carp also saw me blank and retire into hibernation. Therefore today's outing was long overdue.... well, a day overdue really. I'll explain.

Yesterday saw me checking out the state of the Wye. It was just creeping back inside it's banks and looked spot on for some winter chubbing. I also spotted my mate Paul, a distant silhouette against a bleak landscape, hunched over a rod and too far to walk to for a chat. We emailed one another later and he had just one chub to report.

I figured that the overnight rain should push the river back up and make today perfect but, as I checked the levels, I found I was wrong. The rain did not fall as hard as predicted and the river, having dropped a couple of meters, was running at full pelt. Add to this one of the hardest winds I've ever fished in and it wasn't just my confidence that was taking a battering. I set off with minimal gear and found that I was being pushed by the wind so much I actually broke out into a trot. Such speed is not for me so I leaned against the gale and plodded half a mile to an area that usually produces a holding spot. I watched sixteen goosander and a cormorant take flight and I swear some of them took off backwards. 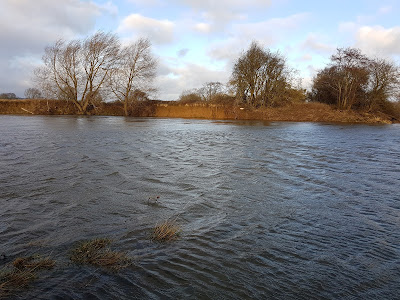 I found a little bit of bank to get the lower half of my body out of the cold wind and cast some cheese paste around just looking for a bite before attempting to feed in the turbulent water. No matter how I positioned my rod or whatever angle I put it at the wind continually shook it. Gusts would bend it and pull the line tight over my cold fingers only for it to fall slack, for a second or two, then it shook and pulled again. My paste could have been eaten by a clumsy seal and I'd never have spotted it. I moved.

I hate fishing in the wind. You lose much of your senses due to the high wind, the noise and the buffeting you receive, it's a bit like sewing with boxing gloves on. The dog wasn't too pleased to be there either. 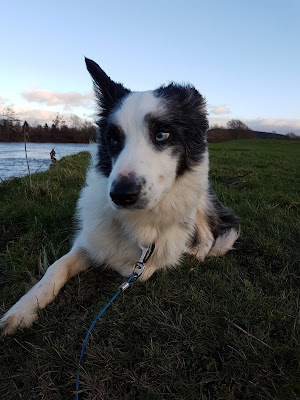 The next spot was a very pronounced crease which, I soon found out, was likely to move at any moment as the angry wind shook the water surface and hurried it above the speed of the main current. I didn't last long there either.

I wandered back toward the car and looked hard for a fishable swim. The one I did settle in was the first that had caught my eye on my outward hike. I liked the fact that it was genuinely out of the wind, the current was fairly even and there was a deep hole with little current if I could hold my bait still in it. On the downside, the swim is snag city and it was that which drove me home.

Yes, a tough day spent suffering from a loss of senses, mainly demonstrated by even trying in the first place.