If you've read my last blog you will know that I am on something of a blank run and that, with a trip to France coming up, I am eager to get this monkey off my back. That then is why I turned up at my little slice of heaven yesterday intent on spending a couple of nights rectifying my slump and scraping the last bits of rust off my fishing before the big event.

I chose a spot that required a big chuck (for me), and where I hoped some decent fish would be patrolling. It's done well for me in the past but, with the lengthy spell of easterly winds, would the fish be elsewhere?

Regardless, I set up two distance rods and one to fish for anything cruising the near bank - a good bet in May. I deposited some bait over a wide area which I like as it gets the fish mooching around and because it helps with my awful casting. I could never hit a dustbin lid sized spot like some carpers seem to do at twice the distance I was fishing.

The wind dropped, the lake was calm with only birdlife disturbing it's surface. It got dark and I nodded off only to be shocked back into consciousness by an urgent alarm. My popped up bait had been taken and I bent into a very, very ponderous and heavy weight.

I pumped and wound it slowly back towards me. Occasionally there was a kite this way or that but the overwhelming feeling was of weight. I'd dropped the second rod tip into the margin to avoid crossed line and everything was going well until the fish headed for a reed bed. I turned it and felt it coming my way, I was also convinced that it was fairly hooked and not a foul hooked smaller fish. I was celebrating inside - what a way to end my dearth of fish. Then.... the fish rolled and was gone.

I stood there, gutted. I had hooked the second line after all and although the lead of that rod hadn't been disturbed, it seems that the pressure from that line acting upon the bend of the hook was just enough to effectively disgorge it.

I was really shattered by the experience but quickly got myself together and recast both rods to make certain they were a little farther apart. That done I flopped onto my bed and having committed my despair to my diary, dropped off again.

90 minutes or so later and the same rod roared off again. This fish came in like a mouse on a lead. It swam toward me making me wonder if it may be a bream or even that it had gone. Again on reaching the reeds it started to slap about a bit. Now I was happy that it was a carp albeit a modest one and I hurriedly netted it and rested it.

Having wetted the cradle and sorted the scales, camera etc I lifted the fish from the water and felt a sharp pain in my back. I soon realised it was a bit bigger than I'd expected and weighed a 29lb 3oz mirror.

The trouble was, it was so lively now that it would not settle. A selfie was out of the question and it wouldn't even stay still for a quick snap so, I just clicked a bad picture for the record and slipped it back. 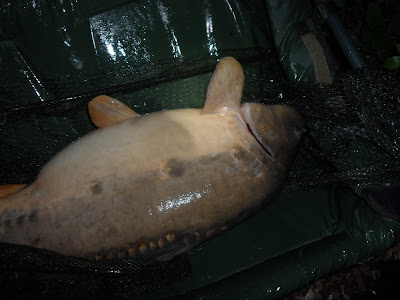 That was the last of the action. Come the morning the lake was flat calm and had vast areas covered by tree pollen but, as the morning progressed so the wind came around westerly and will doubtless get the fish on the move for a day or two. I however, was feeling the effects of lifting my prize and decided to retire and rest rather than commit to a move. I can now relax and prepare for the first week of June and a week of immersive carping abroad. I can't wait. 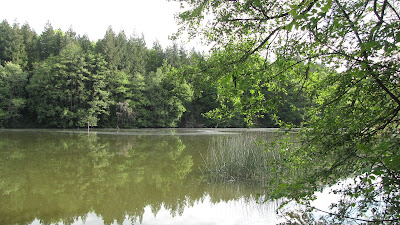