Tuesday was a difficult day. My barbel senses were in overdrive as the mild, dry weather was accompanied by a rising river which would have seen every barbel in the Wye going nuts for some food. I always advise that anglers should listen to and react when instinct calls, on Tuesday it was shouting.

I've had some memorable individual fish and catches when the 'call' comes and every cell in my body wanted to take me to the Wye, every cell that is but.... BUT... my sodding back. I was very grumpy on Tuesday.

Yesterday was slightly better so I thought 'sod it' and went. Okay, the sign said no vehicles on the field due to wet conditions, but the ground was still firm after such a dry summer and I drove to my spot. It was a sensible if deceitful decision as three hours later I could only just manage the hundred yard walk back to the car.

However, in the mean time I had trickled pellets into the head of a crease and fished more pellets in a feeder into a swim that has previously given me good sport. I was content in a world of rushing and swirling water, distant thunder and the odd shower. Those showers skirted around me in the main but back home, a handful of miles away, my wife's gardening was well and truly rained off.

It took quite a while but eventually I lifted a small chub from the maelstrom. At least I hadn't blanked. I continued whilst listening to the blah, blah, blah from Parliament on my radio and resorted to doing a crossword to pass the time. I then found myself looking around for the source of a strange noise - only to find my rod bent and the bait runner screaming at me. It's been such a long time since I've had a barbel bite I was totally out of tune with it. Good grief.

In the fast water the fish stayed deep and fought well but eventually yielded and a mint fish of 6lbs or so was quickly photographed and returned. After all, I just had to record my first barbel in about a year.

An hour later I seized up and struggled back to the motor. But it was enjoyable none the less. 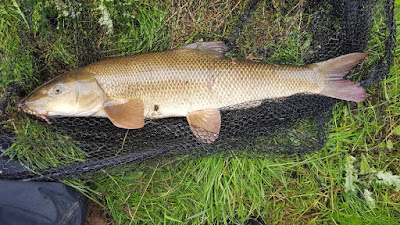