Whilst the bacon cooked we tackled up, me Mike and (newly retired) Pete were sharing a day on the delightful river Wylye that runs through the Wiltshire water meadows on its way to join the Hampshire Avon. Its been a while and I felt quite rusty as I sorted my self out. I kept hearing Mike shout "The thick end!" and eventually cottoned on. Its been so long since I've fished I was holding the rod the wrong way around.

Anyway, with a belly full of bacon butties we set off to a new section (for me) and I settled into a glide above a sluice. It looked spot on but my trotted bread and maggots failed to get a response. Its the problem with grayling at this time of the year, they are often tightly shoaled and can be hard to find but, once located, they are dead easy to catch. Pete was beyond the sluice in a little pool and his rod seemed permanently bent.

I leap frogged past Mike who had found a few good grayling but my wanderings were rewarded by a solitary trout and the sole falling off my wader boot.

A couple of hours later we moved and I returned to a tiny pool on a tributary where I had a score to settle. Last time I fished it, a couple of years ago, I lost a good fish so I wanted a rematch and this time I came armed with those superb grayling hooks - the Guru QM1's.

Mike trickled a few maggots in and suggested that I fish close in rather than the attractive main flow. I took his local knowledge on board and tucked the float right against the nearside rushes in a little back eddy. First go and I had a small trout. Next 'trot' and I had what I had come for, a proper grayling. It looked all of 2lbs in the water but in the net I estimated it at about one and a half. It may have gone bigger but I didn't bring scales, they don't seem relevant some days. 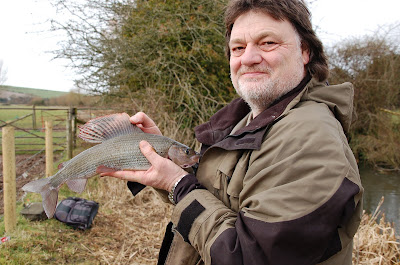 More grayling and trout followed over the next half an hour before we had a tea and cake break. We then moved to the bottom of the fishery where a few coarse fish are on the cards. It looked really nice and I couldn't wait to run a small piece of flake through a slightly deeper section I had found. I only had one bite but it came from a beautiful roach that may have reached a pound in weight. To be honest, I was satisfied and went for a chat with Mike and Adrian, the river keeper. When I got back to my swim I knew I'd had enough, I ached from the exertions of the other day and a three hour drive separated me from a hot bath and a glass of wine so, rather than fish into dusk, I bade farewell and drove home fully sated. 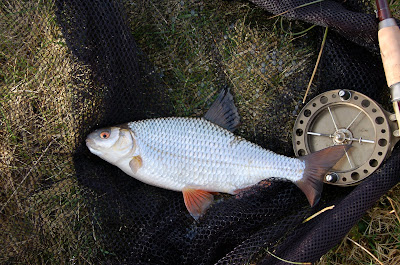