After a week when only a handful of barbel were landed there was a relative deluge of fish taken over the weekend as the weather turned mild. I however, was not there to enjoy the bounty as I was touring the Big One at Farnborough, scoping out the goodies. It was my first time at this show and it was quite impressive. Not as grand as the heady days of the NEC but plenty to browse and a good list of notables doing talks, not that I had time to attend any.

It was one of those shows where you can buy as well as look which is usually great for snapping up bargains but I did notice that they were a lot thinner on the ground. the 'Show Special' prices were quite stingy and some stands seemed to be asking prices higher than normal! Obviously it's just a sign of the times and the tackle industry is feeling the pinch. That said, I did manage to get a great deal on a bivvy so I went home a happy bunny.

One thing that I do not understand about these shows is the blatant use of good looking girlies in tight or short clothing, to sell tackle/holidays/magazines. Are we men that shallow that we would rather miss out on a quality item elsewhere just to have some unavailable babe flutter her eyelashes at us? Well - yes. it works. The way some guys behave when these girls are around is unreal! I just think that its a bit sad - maybe I'm just an old grump. 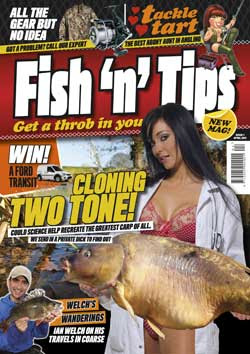 But its reached an all new level, enter the introduction of a new fishing magazine 'Fish 'n' Tips. On their stand a couple of beauties (on each of them) smiled and handed out free copies of the latest angling mag to hit the shops. The front cover shows one of the babes posing with a carp, her blouse is undone and her ample frontage strains the polka dot red bra to the point of overspill. Do we want a magazine full of girls in waders and not much else? Does that really enhance the content? There are no exposed naughty bits, in fact the only tits you will see are some of the contributers :-) But I just think that its a bit sad.

The sight of the huge Mark Barrett, the mag's editor, sat between his Bivvy Babes was reminiscent of a scene from a Sci Fi film, now what was it?..... 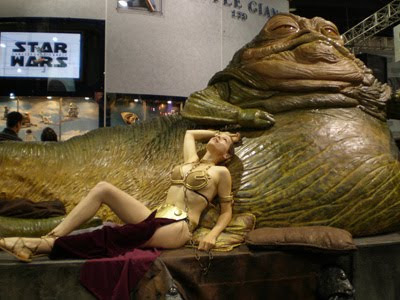 Last night the temperature plummeted so I doubt that I shall make the effort to fish today, In many ways I shall be glad to see the back of the season as it has been my least productive for years but I am looking forward to the summer and I shall no doubt find something to blog about along the way.
Posted by Dave Burr at 09:55