After our trip to the vet Nicky and I had a couple of bad days to get through. Yes, we could have sat at home constantly reminding each other of our grief or I could go fishing. This may sound like a thinly veiled excuse to wet a line but I just needed my own space and time to gather my thoughts, nowhere would be more therapeutic than the lake. Nicky completely understood and wished me good luck telling me to catch a monster.

I set up in a swim I've not had a fish from before and blasted three rods across to a snag ridden area before  sitting back and chilling. The air was cool with an easterly wind blowing up the length of the pool, I felt chilled and got an early night. My sleep was largely undisturbed apart from a bleep or two from the alarms as bream grubbed about amongst the baits, one such bleep seemed to be the catalyst for the complete dawn chorus, May is such a glorious time of year with new life and growth all around. As I got up a goose cried out from nearby, my hand instinctively reached down to steady Buddy, it brought it all back in an instant but a few minutes inhaling the dawn calmed me.

As I retrieved one of the rods I noticed a fish turn close in. I've taken fish from the near margins before so decided to fish two rods accurately at close range with just one rod put out at range.

The day progressed slowly. I rang Nicky, she was having a bad day but when I offered to return I was told in no uncertain terms to stay put. Then the rain started. It was constant, not heavy but the drips coming off the trees above me sounded like drum beats on the bivvy roof. I began to rue my hasty departure and the lack of reading material, I lay on my bedchair doing sudokus and alphapuzzles, I re-read my diary, I wrote a few words anything to eat up the day. I willed the swifts to become bats and the reflections to become shadows. I'm rarely bored by a lake but this day was trying hard to drag on for ever. 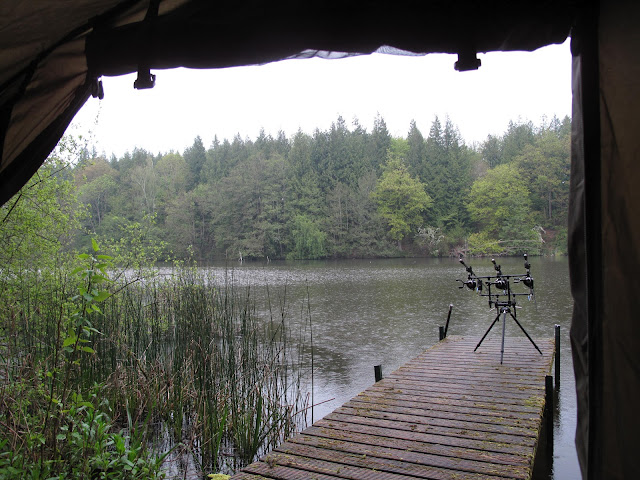 Eventually I turned the light off and lay back waiting for sleep to take over, I began to drift when I was alerted by the glare of bright blue led's and the strident scream of a Delkim. "That's a proper run" I said aloud and went through my much practised routine of reaching for my headtorch (always in my right shoe), shoes on - stumble out of the bivvy, wobble (I still do that occasionally), slip on the wooden staging (narrowly avoiding a dunking), curse the headlight that is upside down and over one eye, grab the rod and heave! It felt heavy and was steaming out into the lake picking up the middle rod's line on the way. I managed to get my light sorted and took control of the fish that had kited right and now had both of my other lines involved as alarms sounded and lights flashed, it was more like a police raid than fishing.

There was a 'ping' on the line and everything came free, it was just me, the carp and the waiting landing net which engulfed it first go. It looked broad across the shoulders - nice one. I rested it in the net whilst I got myself organised. Unhooking mat, weigh sling, scales, camera - try a test shot with the remote..... What is it with me and bloody remotes? I could not get it to take a shot. I think it was just because it was dark for some reason but I've yet to sort out why. There's nothing for it, I'll sack the fish and do it in daylight, but first I decided to pop it on the scales. 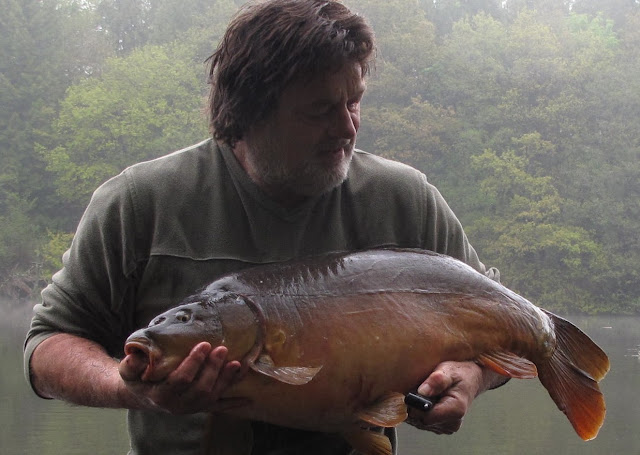 Out came the landing net and I opened it up to reveal a lump of a carp, I just knew I'd done it, my first UK thirty. 30.5 to be exact. Into the sack it went and I went looking for a phone signal to put Nicky on standby for early morning camera duty. I walked up and down that field in the rain and soaking grass but could I get a signal? Could I heck. I got in the car and had a drive about but still, no signal. The ground was slippery and I feared I may not be able to get out of the field in the car so I parked it on a slight downward slope to at least give me a gravity assisted start, then set off for my swim........ but I couldn't find it! It was pitch black, misty and all I had was a small head torch, I could find no landmarks and wandered up and down the tree line looking for the little gap that lead to my pitch, it took ages, I was wringing wet and ready for bed. I wound in the other rods, changed my clothes and got into my sleeping bag.

Morning came and I sorted out the mess that was my kit. I got the camera to work and took a few snaps before throwing everything into the car and slithering my way back to civilisation. I hate the idea of naming fish and do my best to avoid encouraging the practice but, should I ever meet this carp again it will always be known as Buddy's Fish. 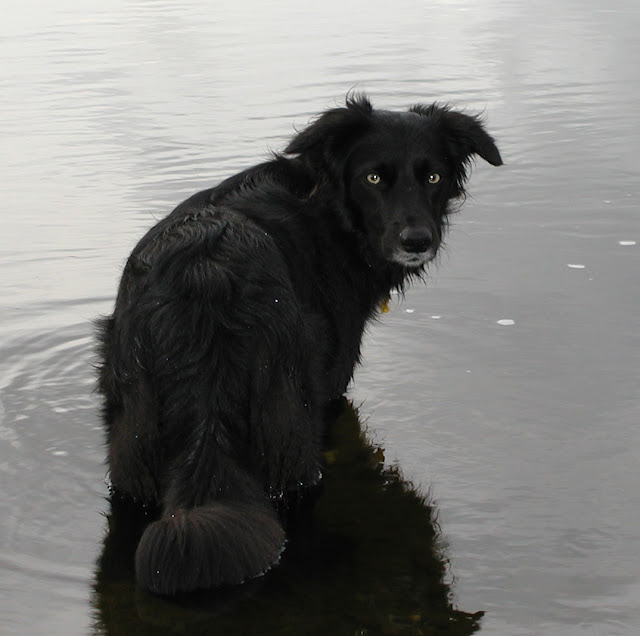