Let me introduce you to The Beast 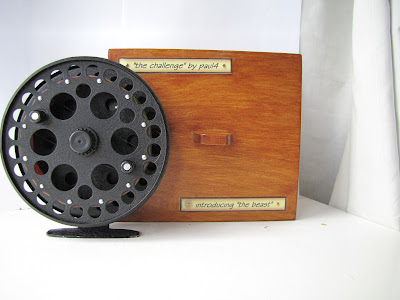 Possibly the worst centre pin that money can buy and barely worth the £10 invested by Paul Whiteing of the ABF but it has been given an identity and today I had my 'go'.

In short, Paul has taken a barbel on the reel - an 11.08 from the Trent - and then passed the reel on to the next person who caught one and so on. The reel is steadily passing its way through members and non members and a record is being kept of the fish caught. Each person that catches a fish makes a donation to charity to mark the event, good eh?

Now, when I heard about The Challenge I was eager to have my go and when last Saturday I was handed a fancy box containing the Beast I was genuinely excited. I see it as a little piece of angling history in the making, we are in the early stages but the challenge could continue infinitum well, at least until the Beast succumbs to the wear and tear of contact with our hardest river fighter. Be it ego, enthusiasm or just entering into the spirit of the challenge, I wanted a memorable fish, one that will stand out on the list. I started to plot my encounter.

All day the sky was leaden, a grey, ominous sheet that creates a special mood. Looking at the box that holds the Beast against the slate back drop of the stormy sky it brought to mind Hammer Horror movies and boney hands appearing out of creaking coffin lids. Something abut the day started my internal monologue rattling off superlatives and metaphors, today just had to be the day.

I had a physio appointment and as the sadist did her stuff so the skies opened and the rain poured. I followed the storm north as I returned home, had a quick meal and gathered my tackle. As I left for the river the clouds had cleared and a blue sky accompanied me on my journey. I was almost disappointed as I had enjoyed the drama in the sky of earlier but, as I set up my gear the threat of rain was upon me and I thought I was about to get wet.

I saw a big barbel the other day as it intercepted a sinking pellet in the way that the chub do in this swim. They are canny fish and not easily fooled but I felt that such a fish was a prime target for the challenge and set about its downfall. My long hooklink was 'nailed' to the river bed with rig putty, a plasticine backlead ensured everything would sit right. I mounted a 15mm Blood, Fish and Orange boilie on the hair and tied two four boilie stringers on, one on the hook the other on the lead. With a gentle swing with my cane rod I lowered the gear into the perfect position and settled the rod down. It was 6.32pm.

The storm had left the clay river bank in a real mess and the ledge at the base of the bank was swimming in ankle deep mud, just standing upright was difficult and all of my movements had to be slow and deliberate. I lobbed a few pellets around the swim just upstream of my trap and watched the chub greedily take them before they reached bottom. Past experience has shown that this usually brings the barbel out and they are generally easier to dupe especially with the rig I had in place. The rod twitched.

I picked it up and waited. It had been either a line bite or a chub had lifted the bait and spooked, either way, I was tense and full of expectation - then I felt the weight of a taking fish and struck! It was 6.42pm.

The barbel screamed out into midstream, I let it go as there are no snags there but it then turned and headed downstream with a force I have rarely felt from a fish, it just felt 'angry' as it bored deep and long. I hung on grimly watching my precious rod bend through to the butt, so far in fact that the reel became detached! I turned it and it swam past me toward an upstream snag but I knew I had the beating of her and just let the rod do its job and absorb the last lunges, she soon tired and came meekly to the net. I had done it, a Wye double on the Beast and, incidentally, my first on a cane rod. I felt elated. 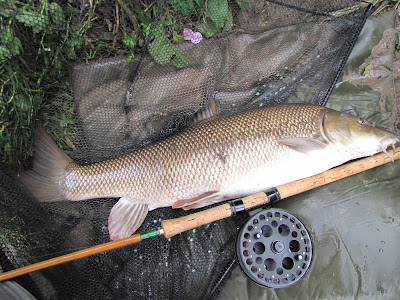 Slipping about in the quagmire I managed to weigh and photograph my prize, 10.13 and in very nice condition with no other hook marks, a very satisfying capture.

With the fish back in her domain I struggled up the bank and took stock, I was caked in mud up past my ankles and my trousers and shirt looked like I'd just played a game of rugby. The rod, reel and camera were all in need of a good clean along with the unhooking mat, landing net etc. Could I summon the effort to do all of that and find another swim? Could I heck, ten minutes in the right spot is all it takes, I'd had my sport - and some, so I packed and went home.

After a dab with a damp cloth I returned the Beast to its box secure in the knowledge that many other will enjoy their own personal encounter. 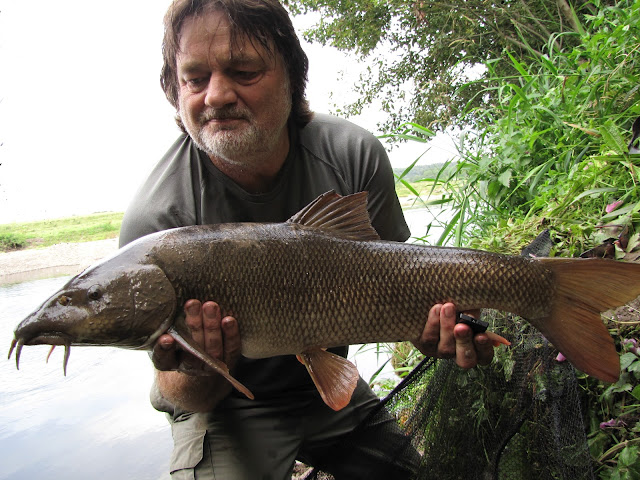