Had a session on the Wye down at Bishopswood at the weekend, it was the Wye Fish-In with the ABF (Association of Barbel Fishers) and a group of us met to raise a few shillings for charity. Typical of this sort of do the fishing was secondary to the overall event so none of us was too bothered by the extremely hot, bright conditions. We were a tad miffed at the actions of some of the canoeists that streamed past during the day, quite why adults, when placed on water, should act like children I don't know. I resorted to bouncing a pellet around the swim and had three chub whilst those either side of me had barbel, funny that but hey, I was chub fishing anyway ............... honest :-)

Having to drive home that evening I avoided the rather thirsty side of the get together but it was good to meet up with some good mates and to put faces to some names of group members.

On Monday I intended to fish all day but really couldn't summon the energy. I went instead during late afternoon and opted to try a pool that has been all but unfishable this season due to the high water. Conditions were just about perfect but I had to go back to the car for a fixed spool reel as it was a mighty chuck to the hot spot and my Wallis Cast falls way short with the pin. As I set my gear up I noticed that the line from the reel spool had come away from the clip and that there were a few yards 'missing'. I started to wind them back expecting it to stretch back from whence I came however, the line came from the direction of the river, then over a grassy bank and eventually pointed to a certain hairy mutt called Harvey. I wound down to him and sorted the mess out. There was line wrapped around three of his legs and he seemed totally oblivious. I know you shouldn't compare but Buddy would stop and step over his lead if it got under his leg and any line wrapped around him would see him stop dead and wait for me to free him, Harvey however, with his thick curly haired legs............... well, it took a while. 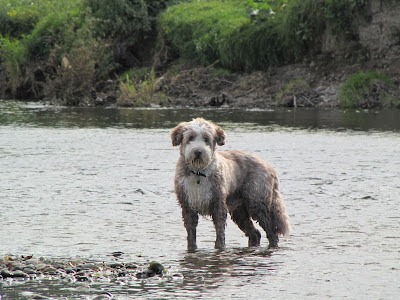 I eventually made a cast at about 5.30, sat back and almost immediately everything felt heavy, I tightened to a running fish and landed a lovely mint barbel of about 6lbs. A good start.

The next cast saw me hooked into a snag which turned out to be a length of mono stuck fast at the upstream end and stretching into the pool. It was festooned with twigs and, as I tried to handline my gear in, claimed my end tackle. I sat and quietly mumbled a curse or two as I re-tackled.

My next cast settled and I thought about making a phone call to a mate to check on his progress but the clutch whined and I was straight into a second fish, this one ran hard and I could do nothing with it until it came off! I wound in but found I was again enmeshed with the length of line I'd previously hooked. This time, when I had it within a few yards of the bank, I waded out (alas I wasn't wearing waders) and pulled as much of it as I could but still left too much of it behind.

Tying a new hook I decided to return in a day or two with appropriate gear and footwear and remove the rest.

I obviously did enough to stop fish from seeking its sanctuary as I had three more pristine shoalies before deciding that I shouldn't be greedy and packing up at 7pm. I think I could have caught a fish a chuck for quite some time but, like my last trip down on to my home stretch, such actions seem a bit greedy and ultimately prove nothing.


I'd like to think that more people would fish with a conscience but I'm afraid that there are few with this attitude. There was a large group fishing together on the stretch and they had managed very few fish between them but I didn't feel that I could point anyone to this swim as I know what would happen, it would be hammered for days, possibly weeks as its reputation gets passed from resident to resident and I don't want that to happen through me. Any competent angler would spot it from a mile off anyway. 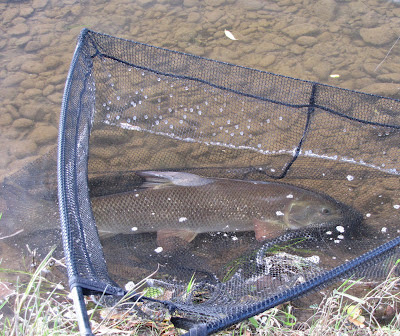