I squished down the rutted, muddy track through puddles and around fallen branches then crested that last rise before the scene opened before me, the lake in full autumn colour. There wasn't a breath of wind and nothing stirred the surface, the world and its reflection an invisible distinction. 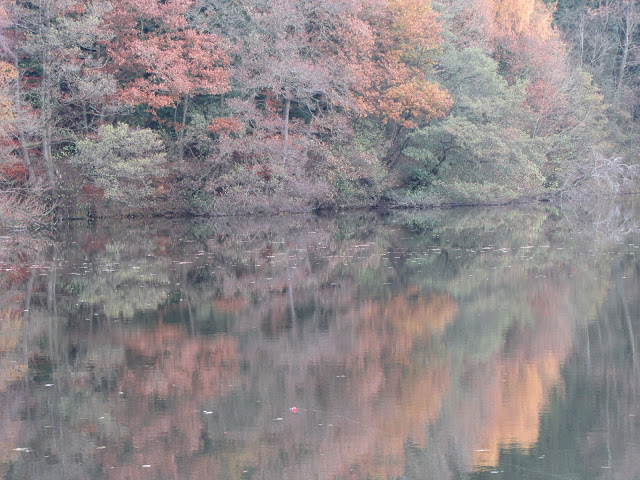 Out went a trout and a lamprey deadbait. One was on a cane rod, I've not had a pike on the cane yet - no, hang on. I bought a rod out of pocket money and holiday earnings once. I couldn't quite afford the new fangled hollow glass rod by a few shillings so had to make do with a compromise. I selected a three piece rod with a butt and middle constructed from split cane whilst the tip section was hollow glass, it was light, soft and as I only ever caught small fish, ideal. On the first trip out I had a number of dace and small roach each bending the rod beautifully, I was happy with my day when I was suddenly attached to something much heavier and faster. A pike of three or four pounds had lunged at the small fish around my bait and had become caught on my little hook which was stuck to its pectoral fin. It was a mighty tussle which I won - it was my first ever pike.

Nothing moved, there was no signs of where or how to fish and the lack of wind meant I couldn't drift a bait around to explore the lake. I got out the lure rod. I love lure fishing and my newly acquired baitcaster reel performed admirably sending a variety of metal and plastic across the water. I cursed myself for leaving the spinner baits at home, I have ultimate faith in their gaudy appearance and have taken many pike and perch on them. I eventually found one in a tangle of lures in one of my boxes and attached it to the link swivel. Second cast and I hooked something that came off after a second or two, I think it was a perch.

By changing lures and moving up and down the dam wall I had another pluck and a swirl as a fish turned away at the last second. Still the floats were motionless. 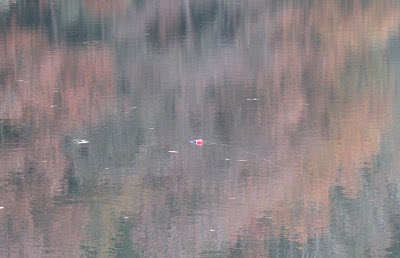 Eventually I opened my 'Toby' wallet and picked out a copper and red design that has often provoked a reaction from a pike. I cast it across a shallow area of the bay to check out its action and thought it unusual that a small lure would create a large bow wave - it was of course a pike following it. Next cast and I had my only take of the day, a small pike that shook its head and tore around angrily but which never really tested the tackle. I was however delighted that I had caught something, the day had felt like it was heading for a blank. 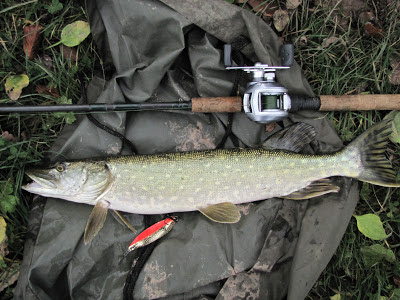 My plan was to fish on toward dusk then have a walk around the small pond and spin for perch but that was rapidly altered when a fleet of 4x4's rolled past and a shooting party alighted. I don't think that Harvey would be very good around gunfire, he isn't the bravest of hounds after all and quite frankly, I didn't want my day disturbed either so I did the sensible thing and went home.

Whilst on the subject of Harvey, I've come to the conclusion that he's a little bit like owning a classic car. When the Mondeo or Vectra driver get's home he just locks the motor and leaves it by the road satisfied that it will start first time in the morning and every morning without much fuss. The classic owner with his old MG or Triumph will have to clean the car, chamois it off and place it carefully in the garage where it will need further fettling and greasing before the next outing - yep, that's my dog.

Because his hair had been allowed to grow we recently learned that he is a scruffy hairbag that is impossible to keep maintained due to his hatred of being brushed and his coat's habit of forming dreadlocks whenever he walks within thirty yards of a puddle. We had him clipped - well, shorn really. The poor girl that did it took much longer than expected and she looked exhausted when we arrived to collect him. He went from this, 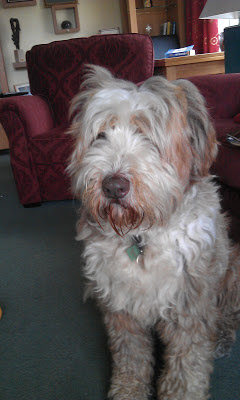 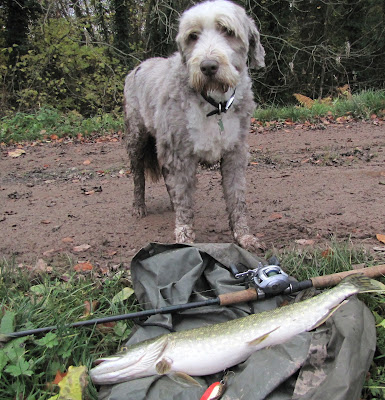 and when I got home believe me he took a lot of maintenance!
Posted by Dave Burr at 16:57