Blanking and loving it.

When I first crossed the boarder into the Badlands, found the gate and negotiated the bumpy track to the secret lake, I had to pinch myself that it was real. A piece of paradise and little old me had permission to dangle a line - I must be dreaming.

That dream was very nearly tainted beyond redemption when I had immediate success. That may sound  bizarre but for me angling is all about work followed by result - hard earned fish live longest in the memory. The 'easy' start was the reason for my fishing it little and half heartedly, I was having a good time but I was allowing myself only to enjoy it in little pieces, snacks between meals, I wanted the hunger to last as long as possible. 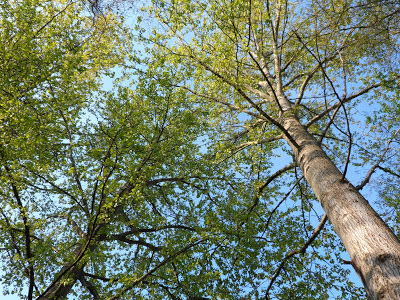 
Then this season arrived. I've fished the lake more often than before and have caught just one carp and a bream. Others are taking a few good fish but both Neil and I have struggled. Neil has found the fish each time out but, with a succession of terrible luck, has managed to avoid landing anything. Its not a new phenomenon, he went through the same thing on another lake to the point where I thought his head would explode. But he stuck at it, rested for a few weeks then went back and caught the biggest fish in there. It will come good for him.

But for me? Well, the lake has given me a nudge, it is saying 'Don't treat me lightly, I have hidden depth" and I am learning more about its secrets each time I visit.

Having Neil there has helped, his enthusiasm has dragged me out of my comfort zone and we have spent a lot of time teetering on branches and peering into the water for signs of our quarry, and we've found them too. Neil found a small group of fish cruising in a quiet place and if his wide eyed description of the largest is to be believed (and I have no reason to doubt him), we could throw a saddle across its back and ride it around the lake.

I have just returned from a couple of night's there. Sleep was difficult as every roach in the lake decided to visit an area of tree roots near my swim and spawn loudly for the duration of my stay. I've never watched roach spawn before, apparently they attach spawn to weed fronds but maybe, with the lack of weed due to the cold start, they are using tree roots instead.

The area I set up in had been full of fish but having settled in, the wind changed and the fish switched off. I moved around fishing here and there and missed a good take in a silty corner. Neil, fishing in a tiny swim, did battle with a mid double common to score his first success of the term. I'd like to have gone to his aid and taken a photo but, sat in the sun, his shouts for help were drowned out by the sound of someone snoring..... okay, me snoring. 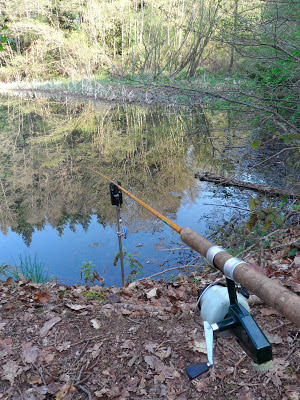 
Last evening I came close. We had just eaten and were tidying the pitch when I had a run. I hit a fish that immediately felt heavy, unusually for here it ran away from me and into some trees but I managed, with a lot of pressure to turn it. It fought hard and deep, much harder than any carp I have ever encountered, it just hugged to bottom and made my strong rod look puny. The evening before I read 'The Old Man and The Sea', a classic tale about an encounter with an unseen monster. Okay, I wasn't being dragged out to sea by a giant marlin but I was having my own battle with a fish that was calling all the shots, Neil even accused me of having the clutch set too light - if only.

Eventually it surfaced, a mirror with a dark back but I didn't get to see the body. I had its head out of the water and figured that was it, a mouth full of air and its job done. I stepped back to allow Neil to net it, it floundered five, four, three yards from the net.... almost. Then, with the slightest shake of its head and the hook flew out of its mouth - gone!

I actually laughed. After Neil's difficult start it was my turn. Ah well.... next time.

I'm finding it hard to get fish, I'm having to scratch my head and look at every aspect of my tackle, bait, methods and location. Its an uphill struggle and do you know what? I'm loving every minute of it.
Posted by Dave Burr at 20:08