But its Monday, so what am I on about?

I went to the lake today fully expecting to find a heaving mass of spawning carp. Because of this I was only geared up for a day session despite a yearning to spend a long time there.

I arrived and crawled (in my car) along the dam scanning for activity, not a ripple or a bubble anywhere. The wind was pushing up to the dam so I opted for a position at this end of the lake in the woods at the bottom of the steep bank where I could sit on a ledge and fish between the overhanging trees. This, of course, entailed much clambering and slipping but it was well worth the effort, a perfect swim....... Splash!

A fish slapped the surface near the dam. I peered across but a ripple on the surface disguised its location. To me it sounded horribly like a spawning fish but I tied my rig and pretended it didn't happen, or the next one. I cast and sat back. Kersplash, splash.....splash - bugger!

I can't fish when the carp are spawning its just not cricket. I wound in, lifted my net from the bush where it hung over the margin and watched, astonished, as a large bow wave moved out into the lake. Deciding to stick to my principles I packed then had a stroll looking for spawners. However, I found only coloured water and saw some brief action in a reed bed where the fish were hidden from view. It looked to me like the tail end of the spawn, somebody before me had walked through long grass to peer at one of the sites so it had obviously been going on over the weekend. Sadly, its typical for me to turn up after the hot sex action but I digress. 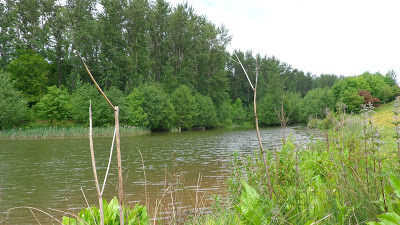 Rather than face the long drive home without catching I took a look at one of the other pools on the estate. This lake of just about two acres is deceptively deep and was stocked with tiny carp and tench a few years ago. The previous occupants disappeared after the big flood in '08 but the new ones have grown well despite some pretty wet weather since then.

As I walked the bank I saw no fish at all, most unusual. There was dirtied water but that may have come from the group of tufted ducks as they fed on the margin shelf. One or two patches of bubbles showed some activity so I set up a float and tried a grain of corn with a little hemp as feed. After half an hour or so I started to see carp cruising by, most I put at about two maybe three pounds with the occasional bigger fish. One small common got its head down on my loose feed and moved toward my bait, the day may not be wasted after all. Then it appeared. 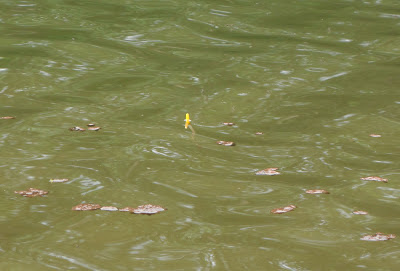 Every now and then we see a fish that stands out from the crowd. The usual notable feature is size but on this occasion it was pure unadulterated beauty. A carp much bigger than any of the others ie about eight pounds, entered from the right and it was stunning. A fully scaled mirror with a crazy paving design of multi sized scales right over its body. I equated it to a fish off a production line where the commons are uniformly pressed out of a regular mould and the mirrors are individually patterned by specialists wearing thick glasses and using tweezers to carefully place each scale. Then, on Friday afternoon, eager for the weekend somebody dunked a naked carp in glue then dipped it deep into a bucket of assorted scales, lobbed into the out tray and said "That'll do". Instead of a 'Friday afternoon car' a vehicle beset with mismatched panels and temperamental electrics, this act of haste has produced a gem of a fish, a one in many thousands specimen that will gladden the heart of any angler fortunate enough to set eyes upon it.

It turned toward my bait sensing the mixture of hemp, corn and pellets on offer. It sank a little deeper and kept going. It spotted my line - it bolted!

I was so annoyed and a little shocked, this lake is fished about as often as Tony Rocca cleans behind his kitchen door (perhaps you should read all of my blogs), so why was it so scared of my line? Surely they learn this kind of alarm - don't they?

I made a two decisions. First, I intend to catch that fish at some stage and second, I put on a lead and sinking rig tubing.

Having spent so much time in the (often vane) pursuit of large carp I had forgotten the thrill of taking and chasing their smaller cousins, I was now fishing hard and wrapped my bait and lead in soaked pellet and put one and a half of my new (shhh, maybe later) boilies on the hair. I sat back and waited.

When the bite came it was dramatic, the fish really tore off and on feeling me at the other end, raced up and down the lake for much longer than a fish of its size has any right to do, A great way to christen my 'Scotties'. 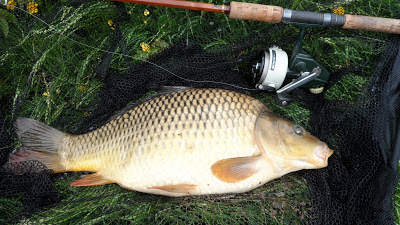 On the bank it was a fine, deep common that also looked a mere two or three pounds in the water but whose girth actually made it double the estimate.

So how big is the fully scaled?
Posted by Dave Burr at 21:56