Of Birds and Blanks

Another opening day and another damp squib. It is traditional to blank on the Wye on the 16th, I don't know why but I nowadays set my sites on a chub or two and cross my fingers but this year - nowt.

I had a couple of hours in a swim that has done me well in the past. I wasn't confident that a barbel would show, I've spent a lot of time looking for them but most seem to still be hiding in their winter haunts, there's not even the usual cloud of minnows int he margins or any chub on the breeding gravels.

I digress, I had a bite after just ten minutes. Woohoo! thought I as the rod nodded in a very chubby fashion but my strike hit only fresh air, I put it down to lack of practice and repositioned the bait. An hour later I had an unusual, nodding sort of bit and lifted into a fast running fish that stopped mid river and shook its head violently. I was wondering what I'd contacted, it was heavy so if it was a barbel I was considering the prospect of an opening day double but, it just didn't feel right. It ran again, shook some more then dived and the line parted with a clean cut just above the hook.

I would guess it was a pike or a salmon, the shaking action indicated a long fish so I discounted the possibility of it being a carp - I'll never know. I know I'll lose the odd fish here and there I just get irked when I don't get to see them, se la vie.

Next morning St. John rang me offering some certain sport in 'his' swim which happens to be on a club stretch but is also at the bottom of his mother in law's garden so he claims it as his own. When I arrived he pointed out the spot and we walked on because, for some reason, he insisted we spend a couple of hours losing leads in a biteless spot upstream. When we chose to move we found two anglers in the spot both of whom had caught barbel. Another dry heave. 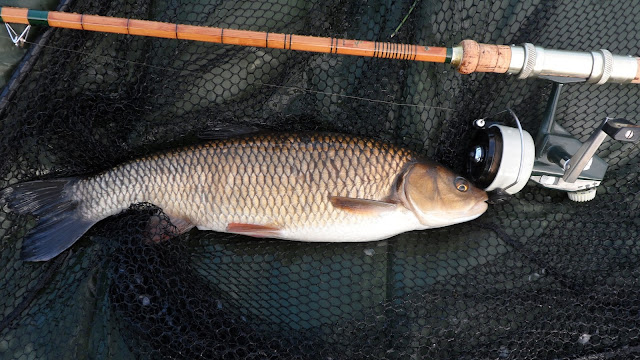 So, last evening I was determined to open my account and catch something anything. I don't yet know of the fish are in shallow or deep water so I picked a shallow glide above a deep pool to hedge my bets, its a good swim and I was confident of a bit or two. It was a beautiful evening, warm, nice sky and a quiet river - no canoes.

I sat and listened to the bird life, the binary call of a couple of cuckoos and the triple refrain of the song thrush. The repeated song of the thrush being the easiest way to distinguish them from the similar sounding blackbird. In old times thrushes were known as Throstle hence the old saying repeated by the sober and those with their own teeth "The Throstle singeth thrice".

I was also pleased to watch a pair of yellow wagtails. They are not a species I see every year which is a shame as they are spectacularly attractive and I spent many minutes watching them bathe then flitting out from a bush opposite to grab flying insects. I got a picture but it was on a cheap camera at full zoom so I apologise for its clarity. 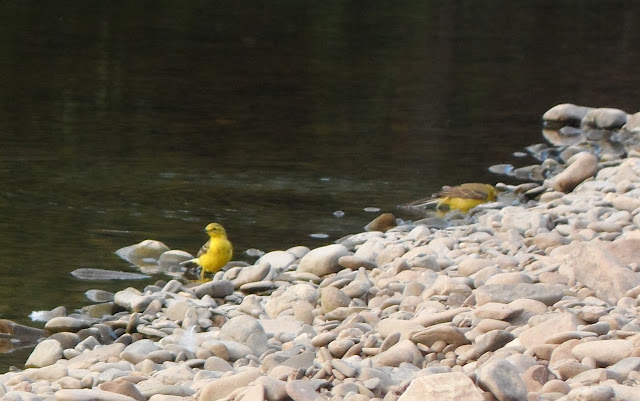 The fish were fickle. I had numerous tugs and pulls but only two that I managed to hit, both were from average chub but at least I went home with a smelly landning net.

The news from up and down the river is still pretty grim. A few fish coming out from here and there but its really peggy, one man on a section may have a great day whilst those either side for a long way have struggled. Its still very early, I'll have a poke around here and there but I think the lake is calling me back.