I caught my first barbel of the season today but that is nothing to the phone call I received earlier in the day. My old mucker Dave Mason rang to announce that he'd caught his first barbel in nineteen months.
Regular readers will recall that Dave suffered a massive stroke and has no right to stand let alone walk half a mile to his swim and catch a fish unaided, he really is a stubborn, bloody minded old cuss and an inspiration to us all. He's now planning on visiting the Wye in a couple of weeks time and I can't wait to wet a line with him - brilliant! 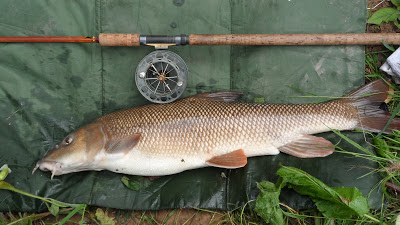 And I sat behind my rods in the sunshine and landed a nice fish of around eight pounds which was very pleasant but when the second fish tore off I can only be held to blame for its loss. I decided to do a bit of showboating and took a couple of pictures of my Scotties rod in action curve which went well enough but the line was around the second rod and whilst knitting and purling to sort it out I felt the fish dive into a snag close in. I tightened and it was stuck so I pulled again and the hooklink parted just above the hook. That was the end of the action. 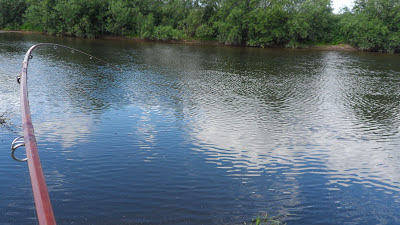