Welsh Wildies and things that creep and crawl

Friday afternoon saw me trusting my sanity to the whims of a Sat Nav as it demonstrated its sense of humour by picking the twistiest route imaginable through the badlands to a field near some unpronounceable hamlet.  A couple of sheep greeted me, no comments necessary, but across the field I found the wagons encircled in a defensive formation in case of native attacks. It was the gathering of the Traditional Fishing Forum members intent on bothering the wild carp that inhabit a couple of lakes.


As the group assembled there were many introductions and names put to faces. I love this sort of gathering as forum chat to pseudonyms is much better when you have a personality to associate with them, (well, usually). There was much eating of burgers, sausages and chicken as the notion of our 'five a day' was left far behind - unless alcohol counts in which case most of us managed it. 'Loop', okay, Paul did the cooking - well he is a chef, and a great job of it he did too with no pink sausages or blackened, solid burgers at all. Most unlike my barbecues.


We sat beneath a clear sky chatting whilst watching satellites and shooting stars.

At some ungodly hour Stu did his cockerel impression and stirred the camp. He really is a great cock. With much coughing, farting and scratching we drank life infusing coffee and were ready to go when, at 7.15 Stu started making bloody toast. He really is a great......


We split up into two groups, one quartet going to Pant y llyn the rest of us to Llyn Gwyn which was very picturesque if a tad breezy and quite chilled. It would look much better had the powers that be not erected four of the biggest wooden platforms I have ever seen, you could park your car on them. In a water where the fish come right to the edge in its clear waters, why are they necessary? I refused to fish from one and began my assault. 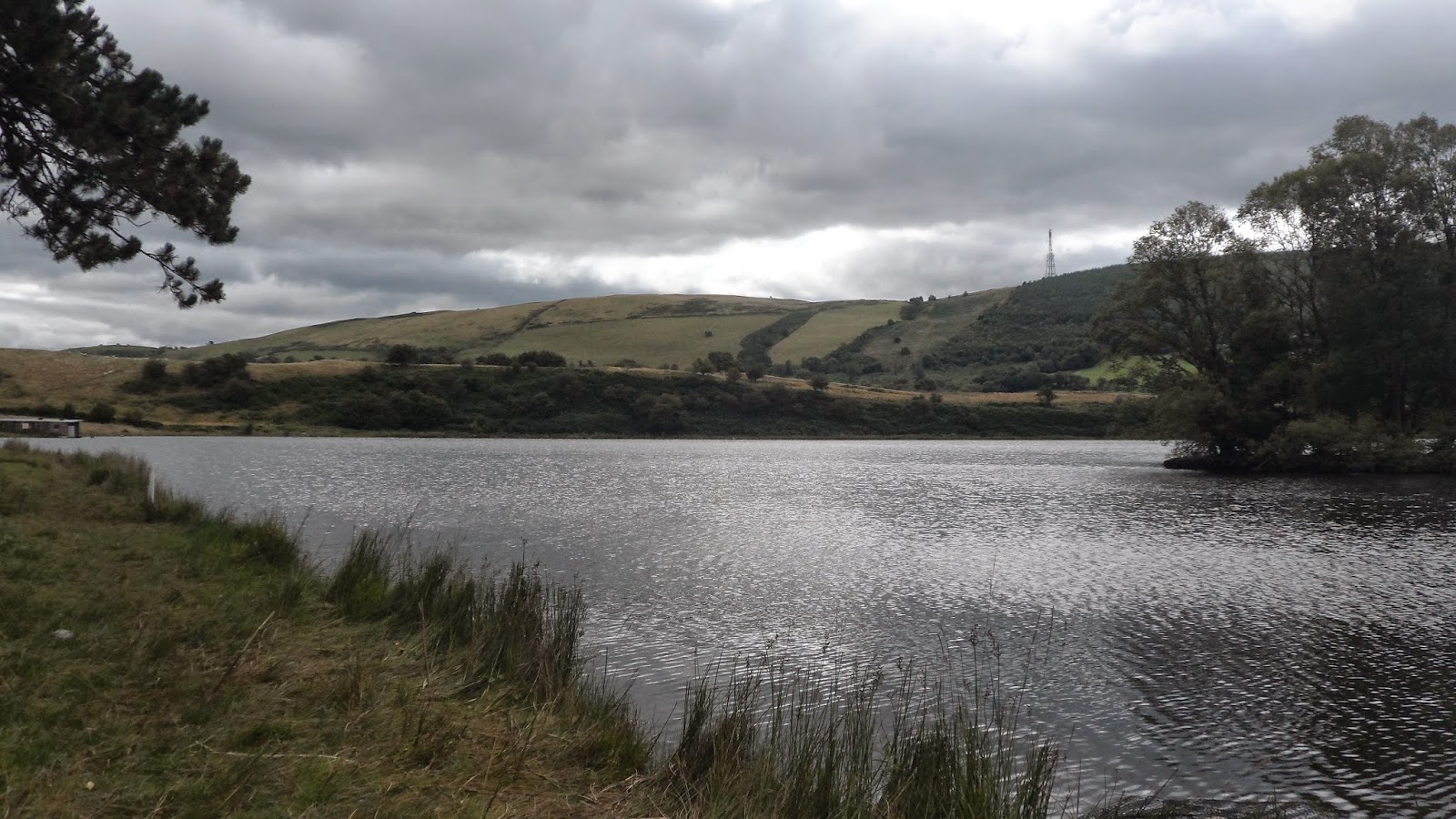 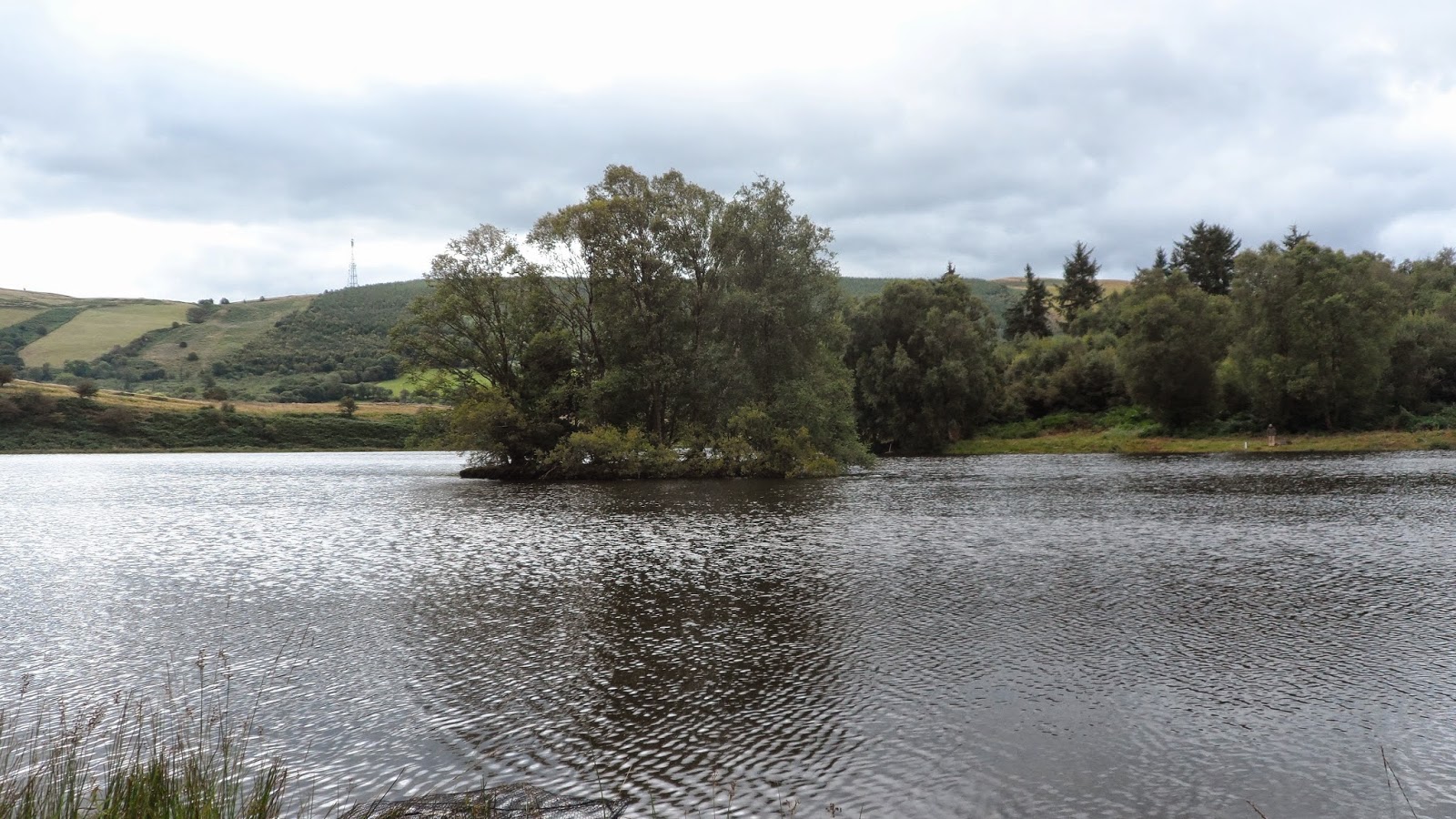 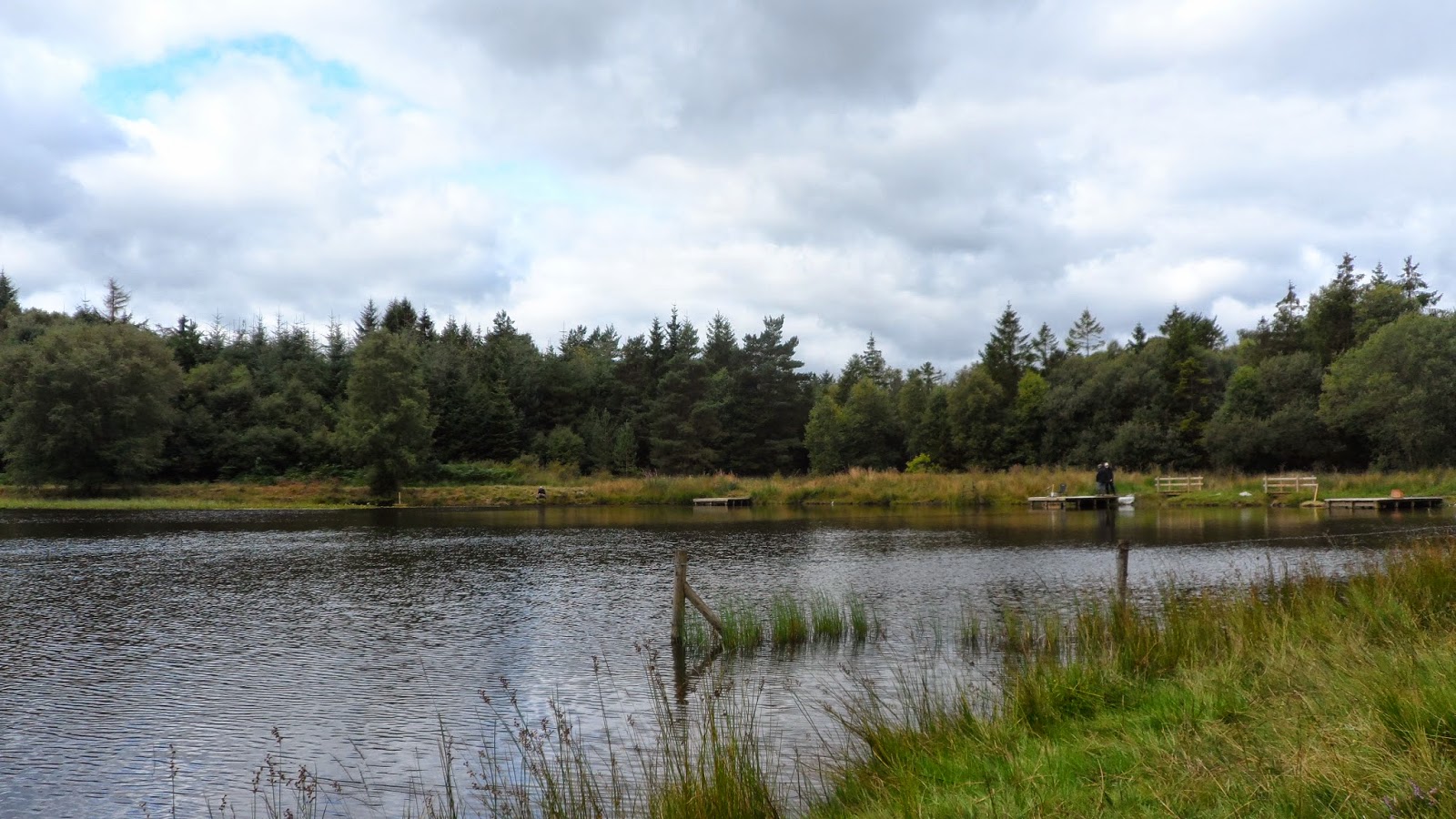 It was tough going. There is a shallow bay set  aside for carp angling whilst the rest of the sixteen acres is for the fluff flingers. The wind was gusting across the shallows severely cooling them whilst any fish following the wind was hundreds of yards away - a challenging cast with a cane rod.

I laid on with a selection of baits, corn, meat, beans of various sorts, but never felt I had fish in front of me bar an 'S' shaped, emaciated rainbow trout that hoovered the margins. To my left was the edge of the permitted zone. Stu fished there and cast along the margins into the trout area (the cad) and intercepted patrolling fish heading my way. He caught a few one even waking him from a nap. Meanwhile Nigel tussled a couple out of some lilies. 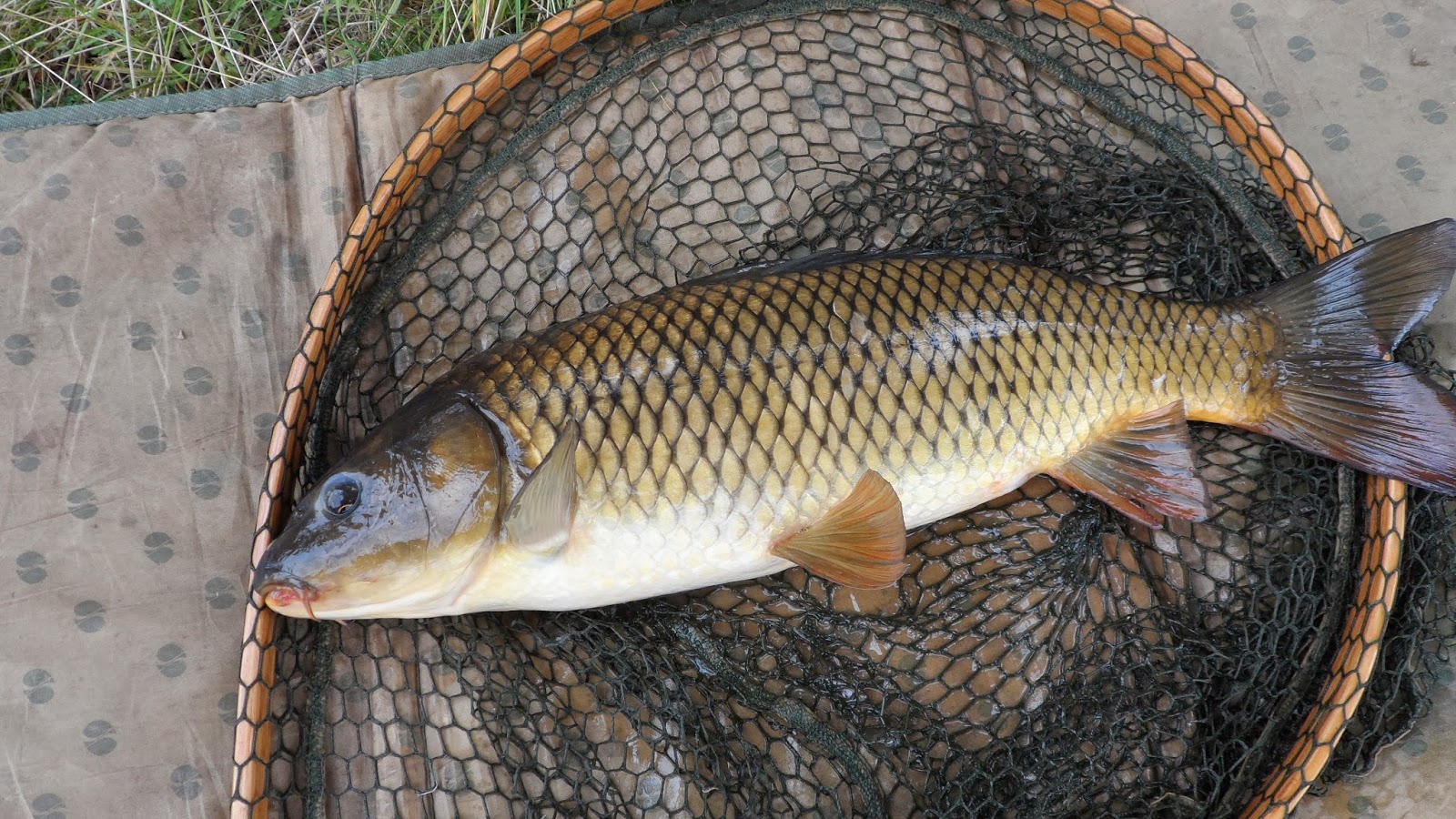 I went over to a lead and cast to the island and anywhere I saw movement, all to no avail so I had a doze. It was then time for a spot of lunch which was nicely enhanced by the other Nigel's catch of four trout taken earlier on the fly. They were hot smoked and very nice they were too.

I moved to the edge of a large bed of some sort of floating plant that has formed an impenetrable mat on the surface. I would never get a fish out were it to find shelter amongst the stems but figured I give anything a heave ho in the opposite direction if I had a take. I fed a trickle of floaters along the outside edge and fished a bait beneath their path. Again nothing worked until I blagged a couple of slices of bread and I began to get bites. I missed one good pull which saw my hook being retrieved from the bracken behind me, then I hooked something small that flapped about on the surface until the hook fell out. I think it was a trout.

I was getting desperate, I was feeling quite uncomfortable but didn't want to blank. I was holding the rod and touch legering. I had a determined pull and hit a fish that went from swirling on the surface in front of me to doing the same twenty yards away in about a tenth of a second. Those fish are turbo charged and mental. 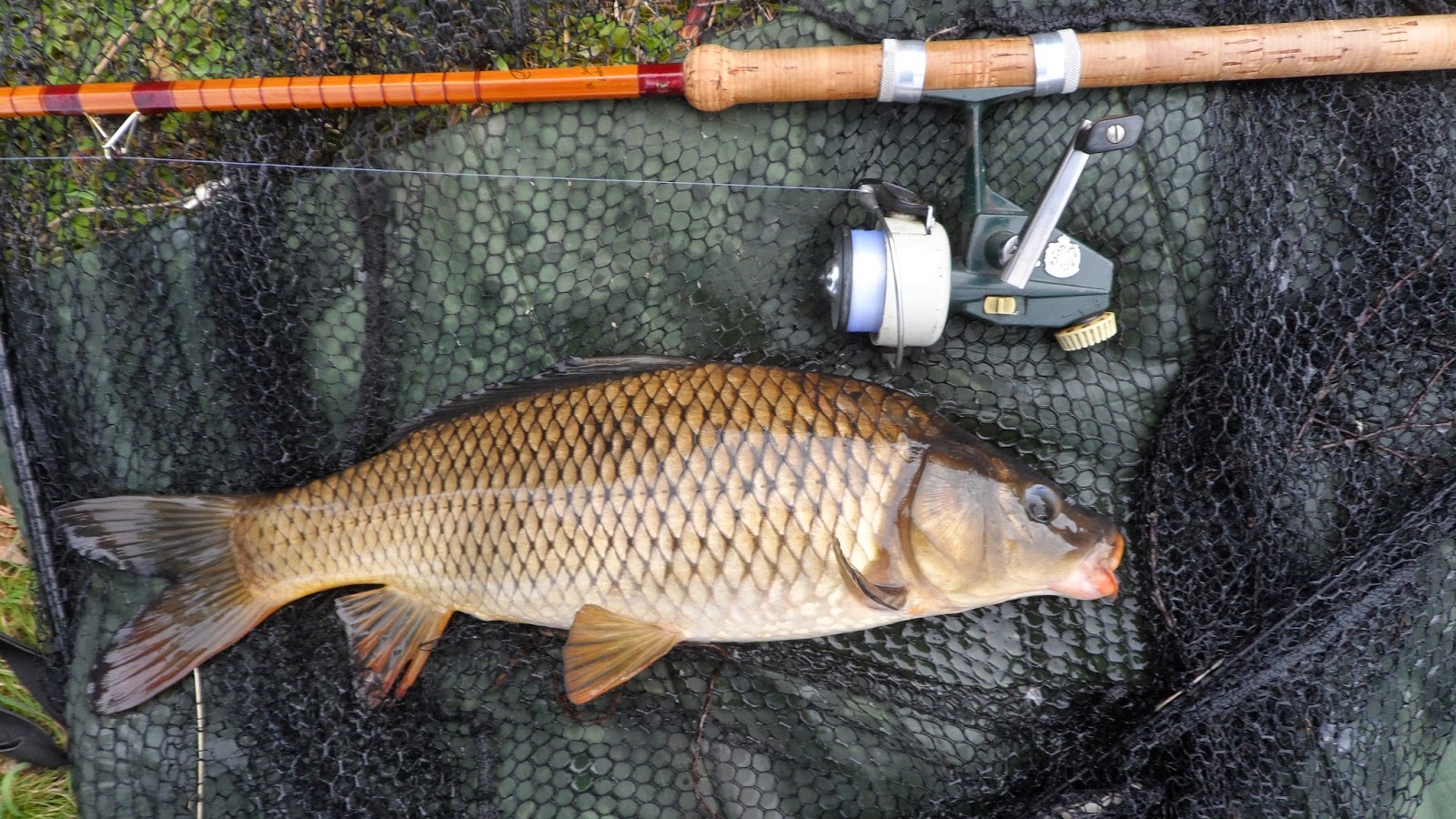 It was only a little one but at least it was a job done. I knew I'd over done it so I packed and, after stopping by the camp to take down my bivvy and saying goodbye to the rest of the group, I was home by late evening.

Are there wildies in Llyn Gwyn? Without an autopsy report on one its hard to say but I did detect a distinct hump on the shoulder of my fish and some of the others were the same indicating that they were King Carp yet one caught by Stu that I photographed looks very like a true wildie. The fact is that if you stock any carp into an upland, clear water you will get lean, dark coloured fish that look very 'wild' in nature. There may well have been true wildies here in the past but I reckon that we were fishing for feral carp which is probably as close as you can expect in the UK. 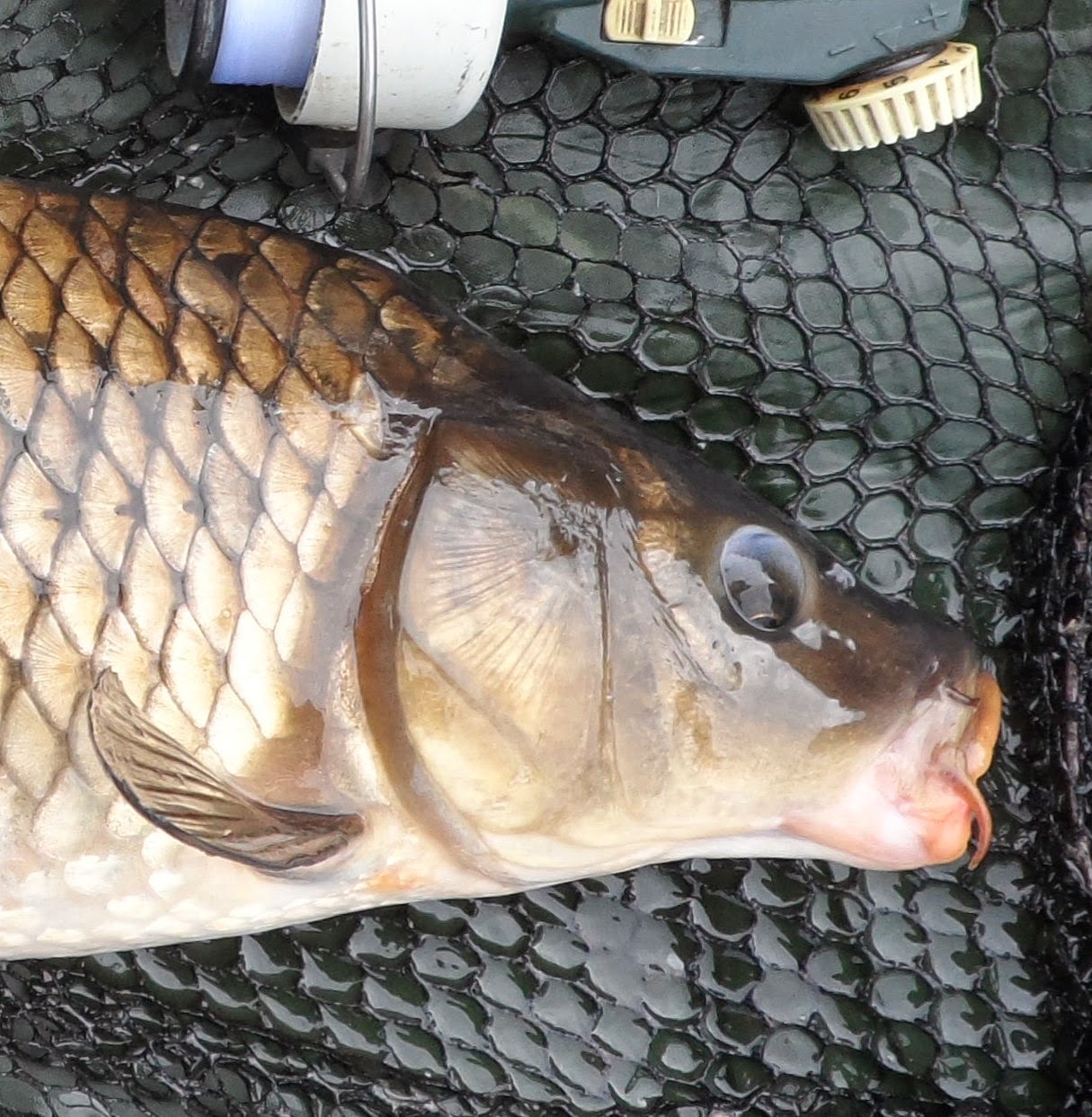 I've only seen pictures of Pant Y Llyn fish which do look more genuine but as they share a lake with a vast amount of chub it begs the question, how did they get there? If the chub illegally were stocked it puts suspicion on the carp stock too and if they were naturally seeded the surly the carp could be also.

Who cares, the look pretty much like and certainly fight like wildies and, with a great bunch of mates it was a very good trip.

I think most of us would like to think they have a degree of animal magnetism. Of course, in reality we rarely do but I think I may be developing something along those lines - insect magnetism.

We leave our toilet light on at night so that my aged and poorly sighted mother can find her way about. All summer long there has been an array of moths resting on the walls and ceiling as they recover from a night of circling a 100 watt bulb. I put a few out in a hope that they manage to do what they are supposed to do with their lives.

The other day I was having my early morning whizz into the bowl when a moth landed on my todger. This was a new experience which rapidly became exceptional when it crawled to the end (its not far), and appeared to be drinking my urine. Now this may be a common practice but one that chaos like to keep quiet about for fear of being pigeon holed as some sort of moth botherer but, for me, this was a first. The tale went down well with the gathering in Wales.

Then, as I chatted on the phone on the banks of Llyn Gwyn I became aware of something crawling up my trouser leg. I'm not one to panic and figured I'd deal with it after the call but, whatever it was, it had ambition and drive and was half way up my thigh when I decided enough was enough and I pinched it through my trousers. It squashed quite easily and left a sizeable squish mark on the material. I finished the call and gave the leg a good shake, nothing appeared. I dropped my trousers, there was nothing there. I even took off my boot in case it had fallen in but still, there was nothing there.

What was it? What was its intent? Had it been chatting with a certain moth and was after its own sample of my liquid? I'm not sure if I am comfortable with insect magnetism, is this how Spiderman started out?