I must start with a quick word about the late Joan Rivers who died last week, a death little reported in the mainstream media.

As a comedian she had no peers and cleared a path not only for female performers but, with her acidic wit and bravery when dealing with anything sensitive like sex, death and relationships, she also carved a path for many male comedians to follow. She was a true star.

And so to Fishing

I nipped out on Monday to make the best of this last flush of summer. I was armed with some stinking dog food by Bakers and some bread, I was going to catch a carp off the top.

The lake was how I had left it and the fish were, as always, quite visible but my, they were also 'enjoying' the sun as nothing seemed to be feeling peckish. There were bubbles in an area where there are always bubbles but yet you never catch and fish cruising up and down the pool whilst all of the bigger specimens were sat just beneath the surface. That was until I snuck up on them and stared them into invisibility. How do carp do that? I was behind cover with a dense backdrop yet, within a couple of minutes of watching these motionless carp, they just drifted out of sight. Uncanny. 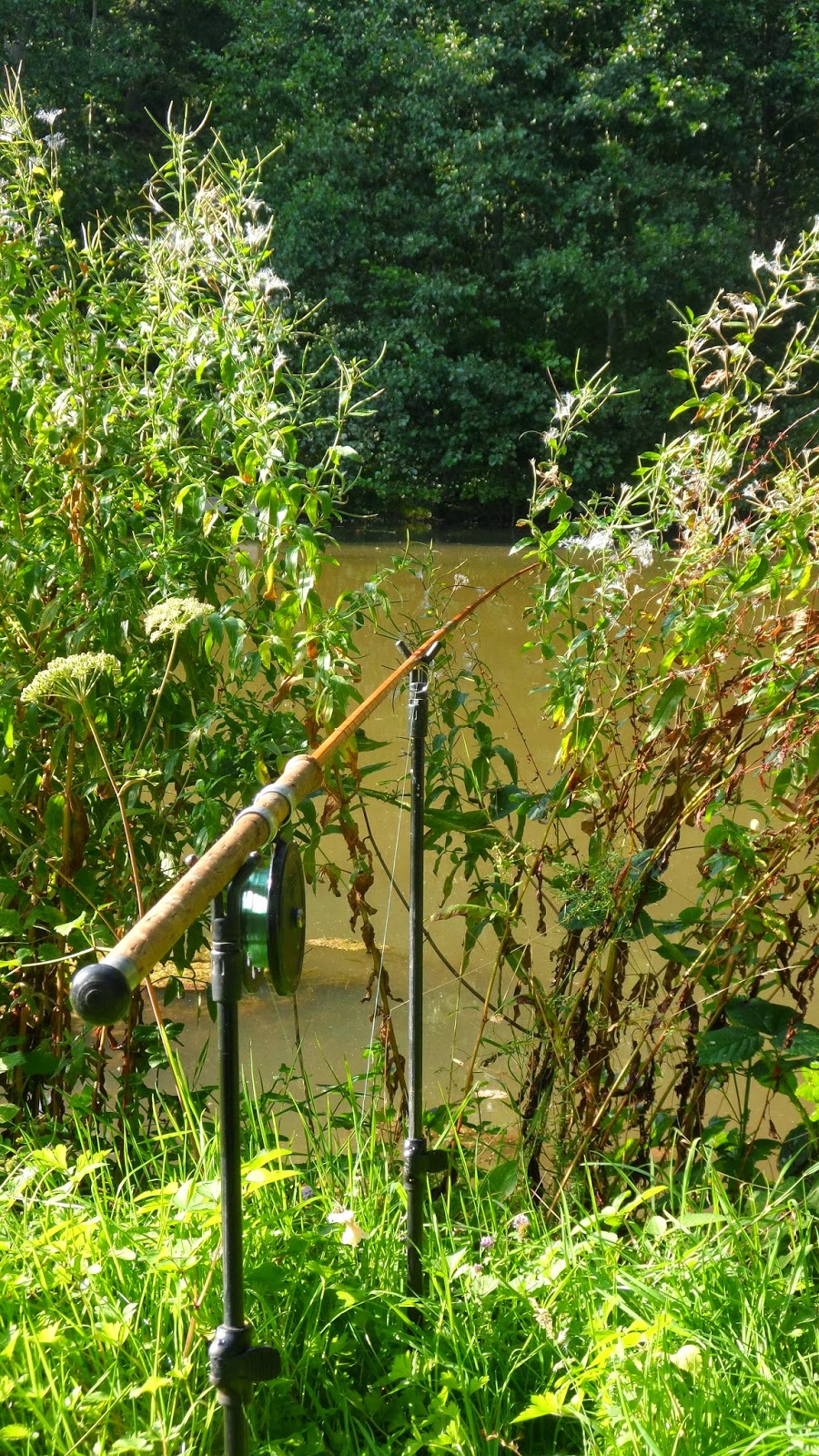 I gave up on anything floating as not one single item was touched. I tried bits of flake and dug out some meat but again, zilch. As I sat, munching on the Malt Loaf my wife had kindly steered me toward as my eyes were fixed on the chocolate bars and biscuits, (apparently its better for me), when I thought "why not".

On went a knob of malt loaf and it was flicked out, free lined, to the edge of some weeds. I was using a Speedia reel I've owned for a bit but had yet to use and was impressed at its performance, I really must have a day trotting soon.

I sat back with my rod poking through the willow herb, staring at the bread bobbin indicator. It was hot. The shade I had sought when I entered the swim had disappeared as the sun moved. I was now the carp and felt it time to move to avoid the relentless stare of the sun but, as I was just about to start collecting my scattered bits and pieces, there was a twitch on the line. I crept forward, removed the bobbin and held the rod. The line trembled, twitched, then slid purposefully away and I struck into a small but frisky little carp that fought with a speed that was alarming and even comical, especially when it tail walked.

It was a very pretty fully scaled fish which disturbed the area I was fishing to a point where I would have to move. But, instead I left for home.

Next day saw me driving to Cirencester to collect my latest rod. I'm hopeless. I recently bought an Avocet which cost a lot and I thought would be an ideal addition to my little collection. It wasn't. It was too light for the Wye and I don't do anything like enough fishing elsewhere to justify it and besides, there was this Allcocks Carp/Avon at an auction and I have wanted one of them for a long time. So, out with one and in with the other. My wife just shakes her head...... and tut's.

I just had to use it straight away. I pulled up next to the river and viewed the low water. I know the swim well and, as it has a large upstream snag and a new downstream snag, I reluctantly slipped the Avon tip back into the bag and attached the heavier Carp tip. Let's get a fish or two under its belt before asking too many testing questions about its ability.

I flicked a small piece of meat out to fish over pellets and crushed boilies. I've found the meat to be quite effective again this season but, as I had Cane with me for his first trip, it was a constant battle to retain enough for my use rather than his constant hunger. I'd had another Cortisone injection in my shoulder earlier that day and frequently heaving an inquisitive dog out of the way was doing little for its chances of success. He eventually settled - right between my feet on a narrow ledge above six feet of water. His lead and my gear were entwined but at least he was quiet. We waited. 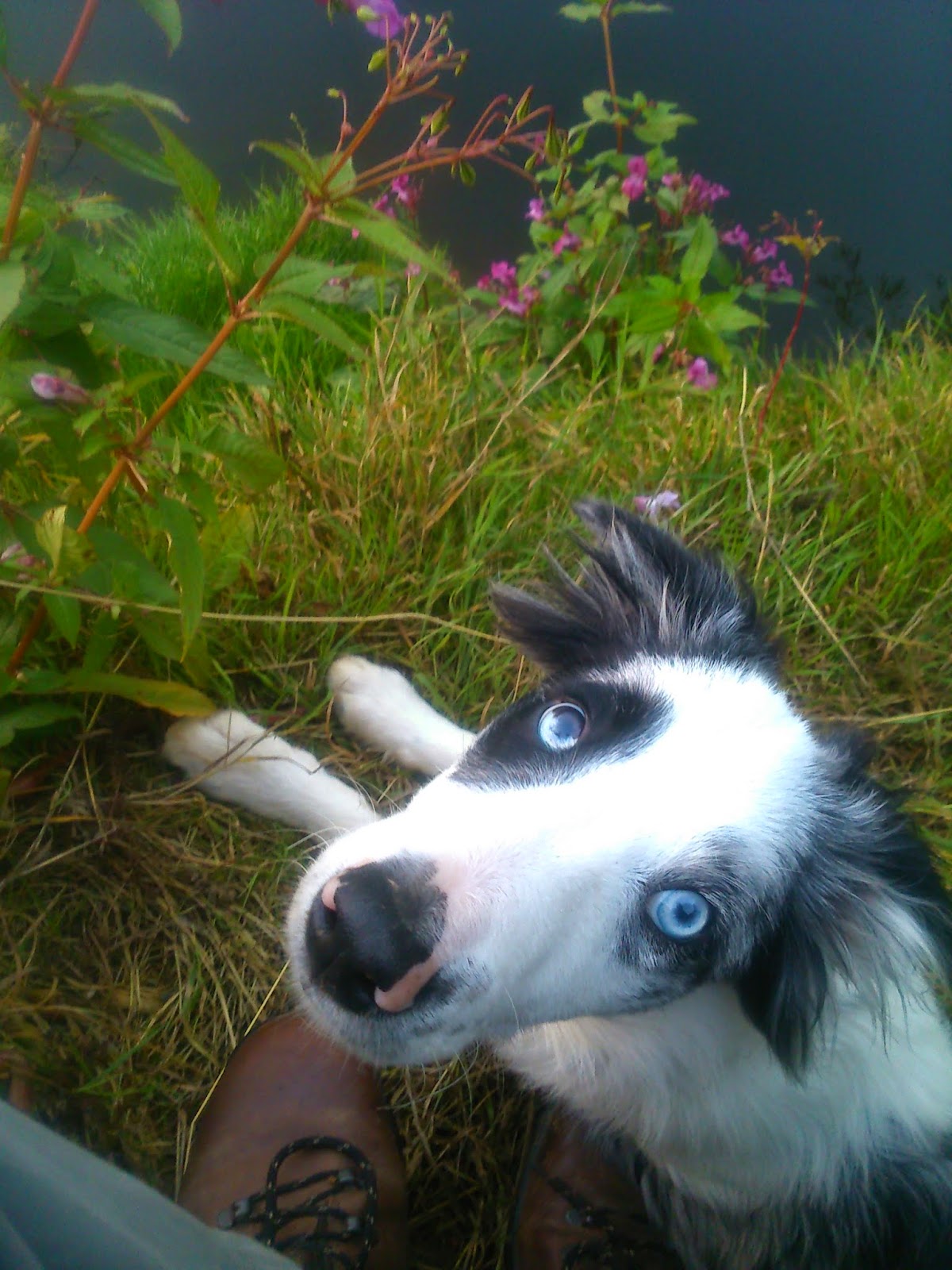 The reel rasped and the rod took up a delightful curve as a barbel plodded heavily upstream. I encouraged it away from the snag and it obliged by heading out into the main current before kiting down then in toward the bank. I lowered the rod and pulled the fish toward me, its an old trick but works every time however, there was a problem and I felt the grating of the snag I was trying to avoid. All became solid. I swore. I really didn't want to lose this fish, it was the first on my new rod and I just hated the thought of it starting its life with me with a failure. I pulled off some slack and waited.

There was no sign of movement so, after a few minutes I heaved into it again. Solid. More slack, more waiting.

I repeated the manoeuvre only this time I was pulling against fish not branch. It was clear! The battle continued and the barbel was showing the benefit of its little rest as it tore around with renewed vigour. I bullied it up through the water and gave it a gulp of two of fresh air but it came to the net three times only to power off at the last second. When it eventually succumbed to the mesh both it and I sat for a minute of so to get our breath back. 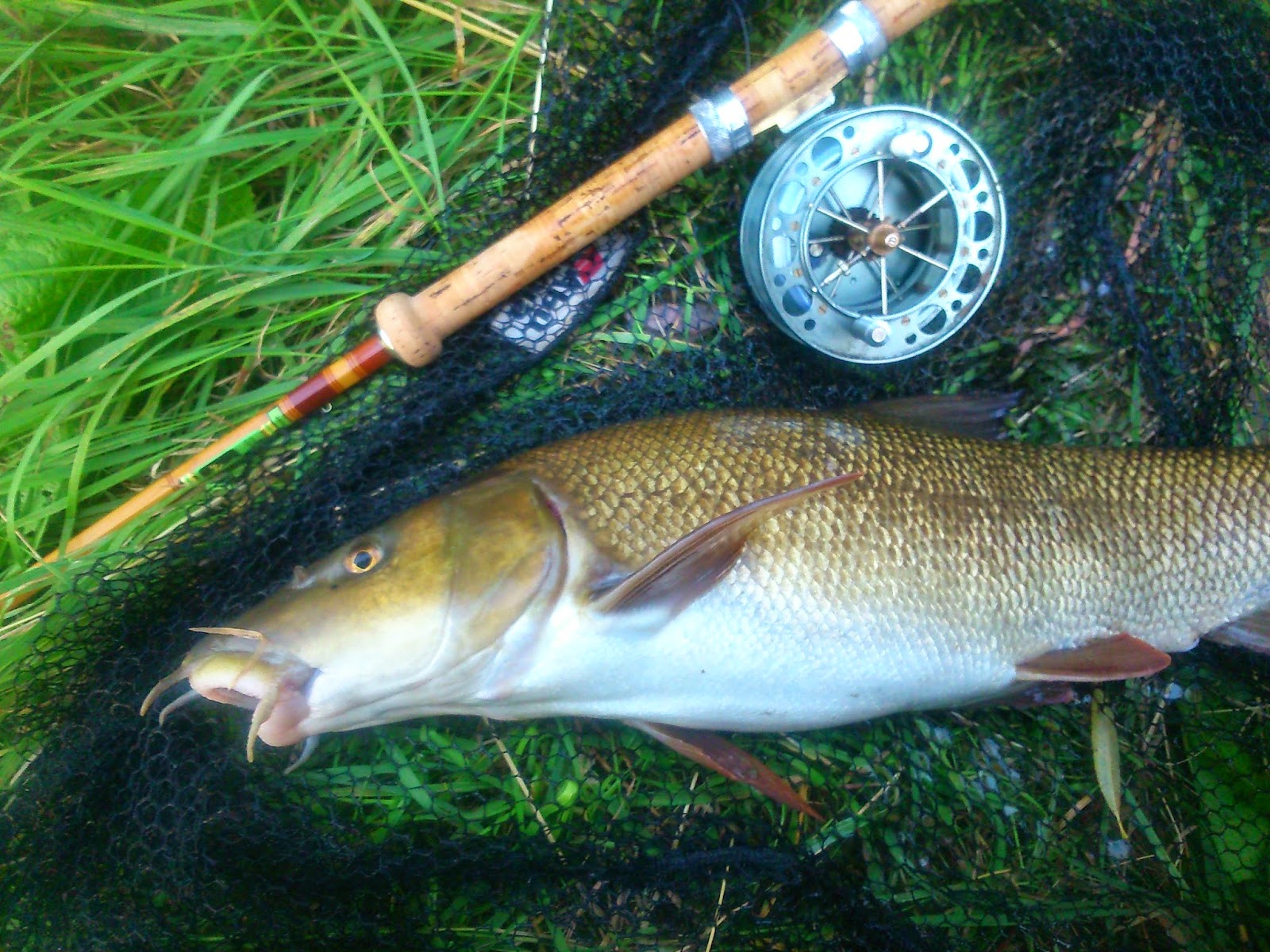 I'm not sure why it is but the Wye fish are all fighting like crazy this year. the lethargic and poorly conditioned chub of old are a thing of the past. We now have fine, scale perfect fish that fight like little carp and the barbel are all trying to pull our arms off. Its great!

I took a couple of snaps, rested the fish again and off it swam. I was very pleased.
Despite the line looking and feeling okay, I pulled off a few feet and retied my rig as a 'just in case'. I then sat back to await the dusk.

I had a few plucks and pulls which I put down to small fish especially as I tightened down to feel the indications and inadvertently moved the light lead and bait a few inches only for something to pull it back again. I missed the strike but smiled at its cheek. The next bite was unmissable and a lively fish made straight for the same snag as before. I leant against the running fish that at first I had put down as a chub but which by now felt like a small but determined barbel. I will never know as the line suddenly parted. Whether it nicked on a snag or there was a weakness in the line farther up than I had expected I don't know, I rather suspect it was the latter and my fault.
A large, deep orange moon was now rising above the tree line, my headtorch batteries were all but dead and there was a pint with my name on it at the Red Lion.... 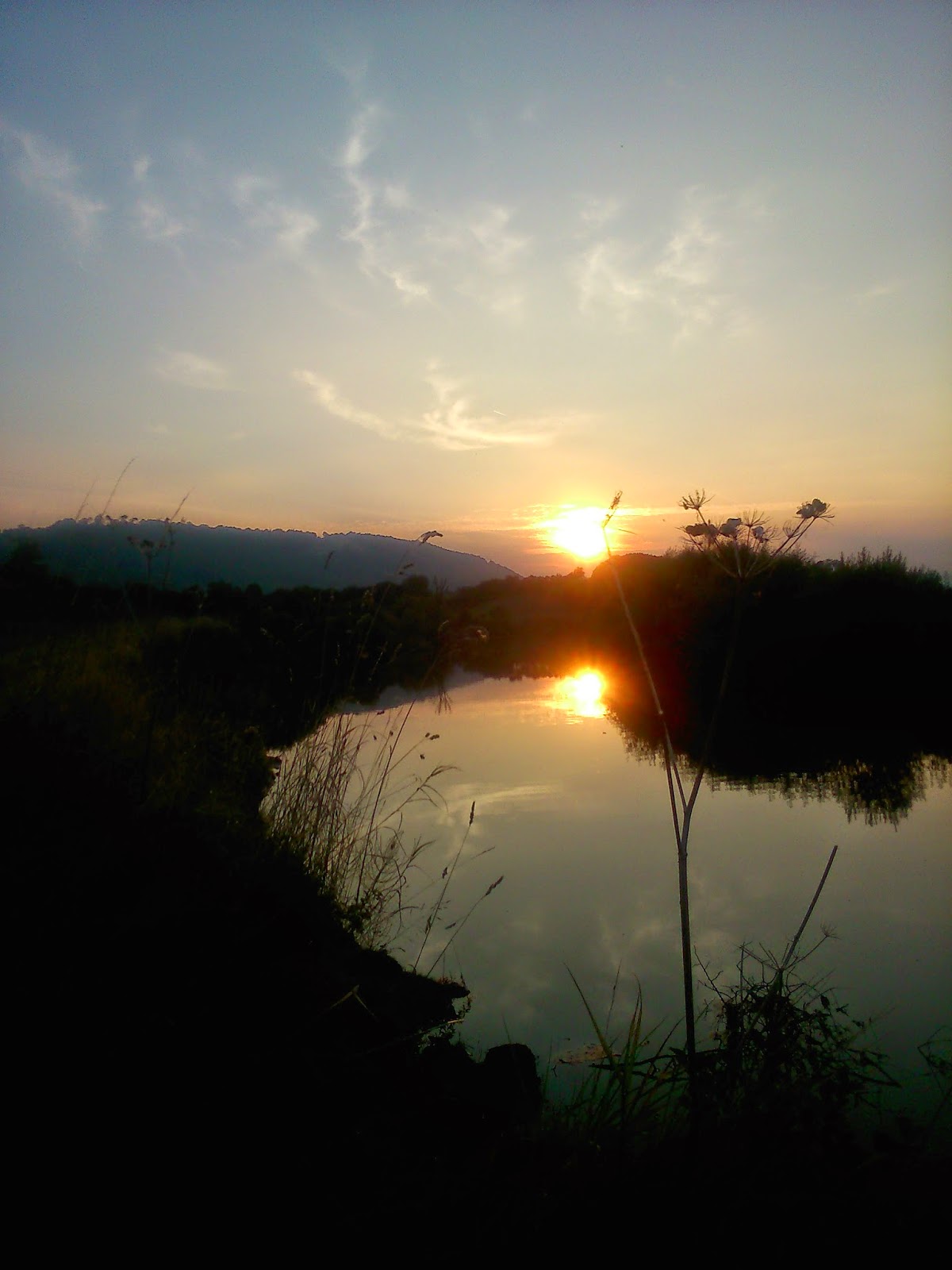