Fishing with a Legend

I've said it before but I feel very privileged to have met a good number of my angling 'heroes' and to have fished with one or two as well. I'm not one to gush over somebody just because they have caught a few outsized fish especially when certain anglers have access to a select number of waters where such catches are available but to fish with a genuine legend is a special day indeed. 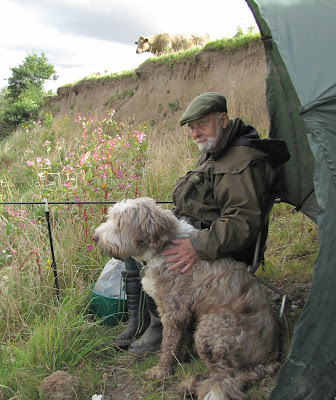 I've fished with Dave Steuart before, I am proud to have got him his first ever shad a few years back and of course I have fished his private stretch of the Test several times but any time spent with him is a pleasure, he really is one of the biggest names in our fishing history. The catches that he and his late wife, the lovely Kay, made in the 60's and well beyond were astounding and he helped push forward the specialist angling scene in both coarse and game fishing. Dave actually wrote the very first book dedicated to the capture of carp and that enough should be enough to put him on a stamp.

So the old bugger and his mate Dickie are staying at the Red Lion this week in an attempt to catch a barbel or two. Unfortunately Dave hasn't been feeling too well and got chilled in the stiff breeze yesterday, the fishing has been patchy to say the least and things were looking like a disappointment was on the cards. I'd given some advice on swim selection and that hadn't helped at all - so much for my local knowledge.

Today I took Dave under my wing and sat with him determined to get a result. "I know just the place" I promised and, having surrounded him with a shelter and added layers of clothing we set about putting a bend in his rod - and failed to get so much as a nibble. The mood was becoming dour but Nicky arrived with a flask of he homemade leak and potato soup to warm the inner man and Dave perked up. We moved.

We set up near Dickie who'd taken a couple of chub earlier but his swim had died. Out went Dave's gear and I added a few balls of my magic groundbait ;-) and, shock of shocks, a bite! 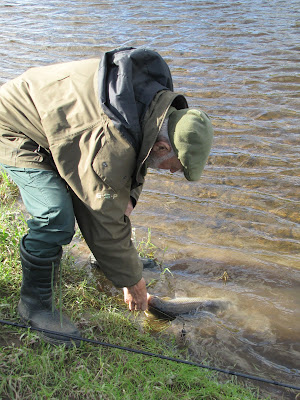 The first fish was a chub and the blank was averted - phew! The next one, another chub, came off as it neared the bank. Dave said it was my hook that was at fault, I said it was him not playing it properly, it didn't matter, we were getting action and we were having a laugh. 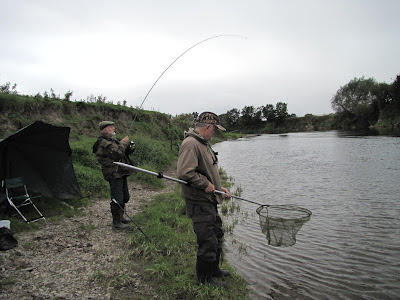 Then the rod went again and a heavy fish plodded up the pool. Dave's landed thousands of fish of all sizes and made short work of landing a beautifully conditioned barbel of just over 8lbs. I was elated, Dave thanked me whilst saying yet again that he doesn't mind if he catches or not - but he enjoyed it so it does matter and even Dickie told me "well done".

Then the rain started and they decided to retire to the pub and have a clean up before their evening meal. They have one more day and catch or not they will have another wonderful day on the Wye. 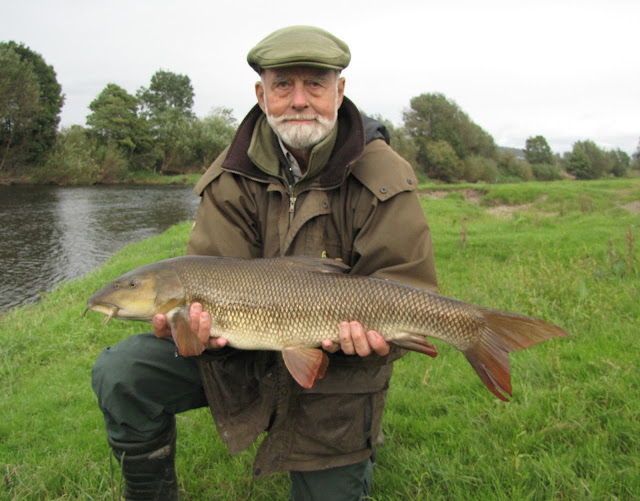