Its just a change of date but September is always a month full of promise so my mood has lifted accordingly.

The sale room I mentioned in the last post, was the source of some entertainment. Auctions are a great venue to study human behaviour as well as holding an atmosphere of intense anticipation and drama, if you've never been I recommend it but sit on your hands! As I'd left a couple of bids on the viewing day I didn't buy a 'card' to enable me to bid on the day which was probably a good idea, the urge to have a punt is so strong it can cost an awful lot for those lacking will power. I did however miss a couple of real bargains but not to worry, I got my rods and was delighted. So I came home with a 'Sabina' float rod in very good condition and an Edgar Sealy Rover that needs some tlc but which shows promise, an absolute bargain at £47 the pair.

This evening I was very keen to give my 'new' rods a trial. I decided to have a short trotting session with the Sabina and finish the session with a spot of chubbing with the Rover. Of course I got to the river later than I expected but went ahead with the plan and set up the float rod matched with a Trudex centre pin that used to belong to Peter Stone. It took a while to get a bite but once I did it was one a chuck and I started to bring little chub and dace to hand. They were all tiny but I was enjoying myself and there's always the anticipation that the next bite could put a proper bend in the rod. It didn't. 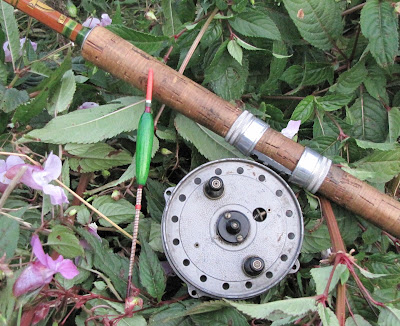 I was going to stick to the float as the sun was dipping behind the trees but then thought, 'make the effort' and I set up the rover with a newly acquired Allcocks Delmatic. Now I'm not usually one to trust old reels but this one has a story which I may go into some time in the future, anyway, I set up the rod with a paternoster to a light lead and a size 8 with a couple of pellets. I cast it to where I'd been drip feeding pellets and set about taking a picture of my float rod.

I looked up to see the rod tip bend and stay bent! I tightened into a heavy weight and I smiled as I realised I was into a barbel. Despite issues with the reel seat and straggly bits of whipping flapping in the breeze the old rod did me proud and playing that fish was a genuine pleasure although I was forced to backwind rather than use the juddery clutch on the aged reel. 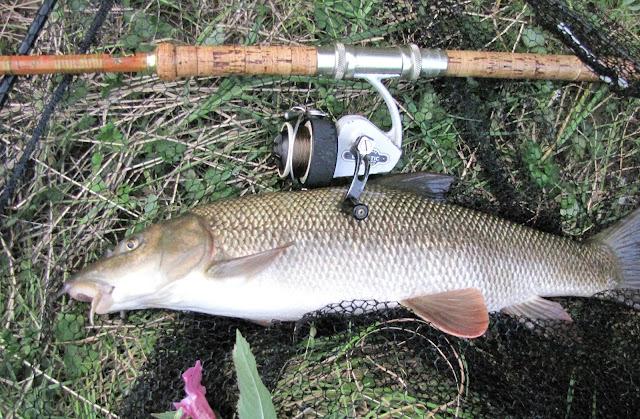 It wasn't a big fish by any means, just five pounds or so but one which gave me great pleasure and saw me pack up with a satisfied grin etched on my face. As I left the fishery I was treated to one of the finest sunsets of the year, a perfect finale.
Posted by Dave Burr at 22:07