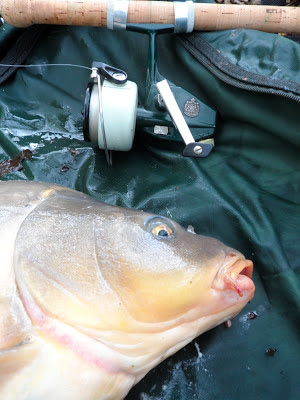 Regular readers will have gathered that having dabbled with cane rods for a few years, this last twelve months have been dedicated to catching as much as possible on this traditional material. I have become quite the convert and cherish each capture in a way I rarely do on carbon. It works for me and I'll stick with it for the time being.

However, I have found some rods reluctant to bend to the thrust of a fish. Cane rods can be a little like musical instruments and tooth brushes - don't ever let anybody else use them. Some have an understandable reluctance for generosity when it comes to a very special and treasured rod. I'm fine with this situation but what I don't understand is that when a rod is eventually proffered it will often remain straight for the duration. Take Neil's rod for instance. We had it made for him and he values it just below his life and just above anybody else's. Having caught a few fish on it he let me use it, I caught a chub. The next time I was allowed to use it I caught a barbel - job done. After that I borrowed it a couple of times and never had a touch on it.

Its the same with some other rods, either they don't like me or they need to be a little more convinced that I am worthy. Enter the stepped up MKIV carp rod. This magnificent rod was a gift that I had some difficulty in coming to terms with. I don't like feeling beholden to people but I soon understood that this was merely a gesture of generosity in its extreme and that I should take it in the manner it was intended. However, the rod evidently felt I needed to fully understand its true depth and it steadfastly refused to attract a fish, indeed I felt that it emitted some sort of negativity along the line as no matter where or how I used it, the result was always the same - zilch.

Add to this situation the slow start I've made on the lake this season and you can see how those little gremlins of doubt can creep through your thought process when assessing the fishing. But I was determined to come through. 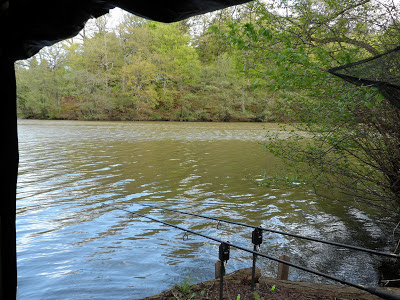 Yesterday I made a rash decision to go to the lake rather than watch the football and Sir Alex's farewell.
When I arrived I started to have second thoughts, it was colder than I expected and showers were forecast, hardly ideal stalking weather. I set up my stall in a familiar swim to me and fished the evening and night on carbon rods at distance. Apart from a few breamy looking twitches nothing disturbed the wait. The only 'action' came this morning when I retrieved my yellow pop-up bait and it was grabbed by the skinniest and tattiest looking pike in the lake. 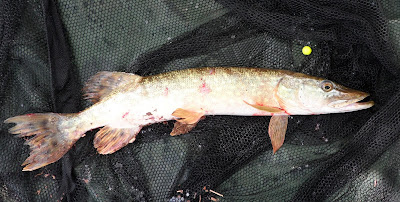 At 11am I had a meal and wondered what to do to provoke some action, at this moment a carp decided to crash out and tail-slap the water on the opposite side. I don't need that sort of invitation twice. Grabbing the MkIV and the minimum of gear I made my way the half mile around the lake and marsh to the spot where the fish had showed, it was one of my intended stalking areas so I was geared up and ready. Out went a couple of bits of broken boilie on the hook and a few more scattered around, I sat back and waited.

It was barely half an hour before I had the take and I made a quick strike, swore because I'd forgot to put my hand over the loosely set spool, tightened it and struck again. It was still on and I felt the action and power of the rod at last. The only negative about the experience was the tepid fight from the fish, it just flopped about and didn't seem to know what was going on and apart from one short run it was soon netted.

So there we had it, after a struggle for fish and a reluctant rod I was sat with a seventeen pounder on my unhooking mat and suddenly everything feels good again. I just hope that the bond between angler and rod is now created and the next fish is a little sooner in coming. 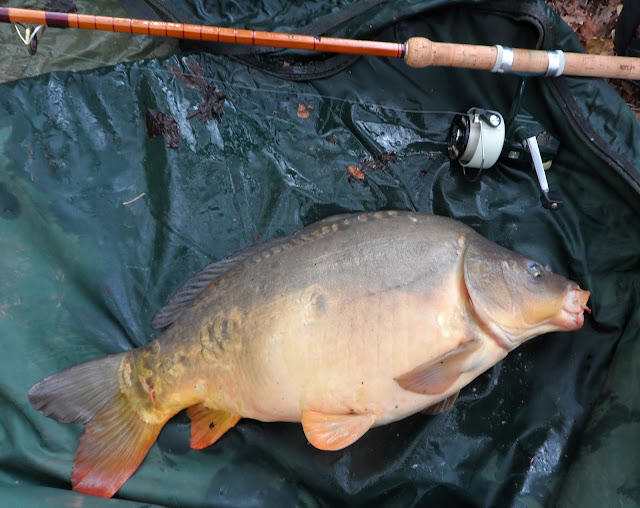