Through the Eyes of Jacques Tati

If you are not familiar with the work of the late, great Jacque Tati then you are most certainly missing out. He was a film maker extraordinaire with his delightfully observed comedy based in his native France. 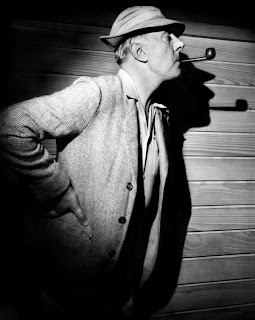 Jacques Tati
Tati saw humour in everyday situations and delivered those occasions in a subtle way that demands some work from the viewer. Nowadays we are handed a blatant build up to each punchline or pratfall which is then delivered in front, dead-centre of your screen. Watch then re-watch Tati and you will find humour all over the screen, indeed his film 'Playtime' is more like watching in real time rather than a movie screen, as the film arrives at its eventual climax and the grand opening of the restaurant gets under way, you have to scan the screen throughout to find each gem of hilarity. Its a demanding but rewarding watch but probably not the first one to look for. Jour De Fete is a great starting point, anybody that has lived in a quiet village will recognise many of the characters. Les Vacances de Monsieur Hulot (Mr Hulot's Holiday) is another classic, set in Brittany the hapless Hulot (played by Tati), struggles with mixing with the other guests at a small beach hotel.

And it is Brittany that we stayed in last week, we had had to cancel the first week of our break but managed a shortened second week in an unseasonably cool France but still had a wonderfully relaxing time. I love just about everything about France - even the people which get an undeserved, in my experience, bad press from the English. But to sit and watch France pass you by you very soon find that Tati had a wealth of material to work with. Of course its the same anywhere and when viewed through Tati's eyes (which I tend to do quite often) even the dullest of places - and hospital waiting rooms spring to mind - can be filled with entertainment as each character has their moment in your own internal screen classic. 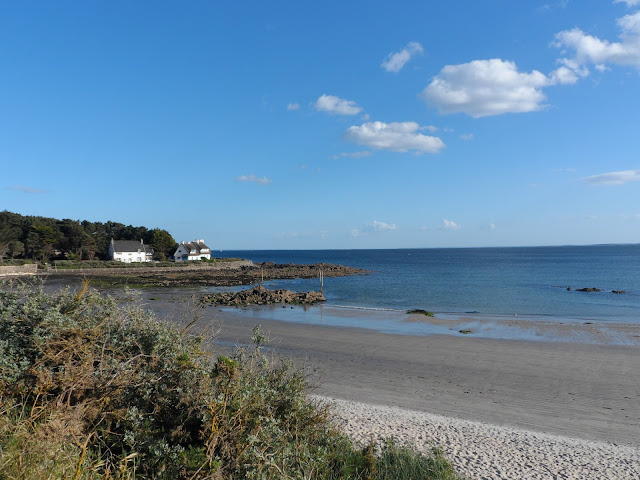 Some cool and windy days aside we still saw some sunlight, visited all of the places we wanted to go and managed to sample some of those things that make a French holiday special. Is there a better way to spend a long lunch than with a big bowl of Moules Mariniere as you overlook the Cote Savage? It was a return to an area we visited a lot in our younger days and has lost none of its charm. But I do wonder what Tati would have made of an overweight Brit in his late fifties, hopping from rock to rock as he explored rockpools with the same wide eyed enthusiasm that he showed fifty years ago.

The rockpools were amazing like little worlds within our own and contain far more exciting species than you tend to find around much of our coastline. Plenty of crabs including lots of hermits, an assortment of fish that tend to dash between kelp and rocks too fast to identify although I did catch a couple of pipe fish, haven't seen those in ages. I found a brittle starfish, a couple of sea urchins and, at the very bottom of the tide, a host of sea slugs, I was in my element. 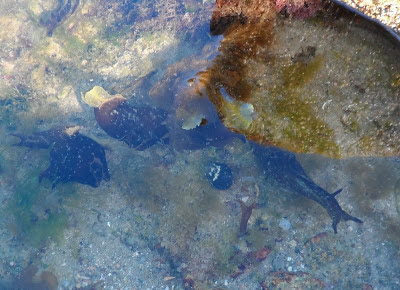 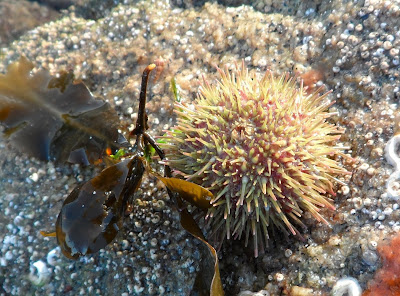 So, the moral of this blog entry is simple, don't take the world around you too seriously, there is humour everywhere and whenever you have a chance to peer into another world - take it.

To those of you that may have read my previous entries (anybody? oh well....) you may recall that way back in April 2011 I had a week in Tony Rocca's flat in Spain. Whilst there I set about finding my revenge for his dastardly trick of attaching one of those little bite alarm bells (as used by sea anglers), to the back of my shirt so I looked a complete dipstick as I wandered around the supermarket. I therefore set about decorating his flat with a number of similar bells suitably secreted and he duly cursed me as each one was found.

Whilst in France I received a text, I cannot quote from it as the wording indicated a degree of exasperation and dismay that had temporarily switched the censor button to 'Off'. But the gist was that our Tony had found yet another (and not necessarily the last) of my bells after over two years! I did chuckle. However, it says more about his cleaning regime than my ability to conceal items.