Three weeks ago I wrote this "Neil has found the fish each time out but, with a succession of terrible luck, has managed to avoid landing anything. Its not a new phenomenon, he went through the same thing on another lake to the point where I thought his head would explode. But he stuck at it then went back and caught the biggest fish in there. It will come good for him."

Just to prove that the old man get's it right some times my prediction came to fruition last evening. I couldn't fish for one reason or another but Nicky and I took a drive out on a lovely warm evening (about bloody time too), and dropped in to see how The Boy was getting on.

His set up looked like a carper's nightmare, a pod with three different rods on it - pure heresy in many circles - with a 12' carbon, an 8' stalker (cast across!) and a MkIV split cane and pin in the margins. As we chatted he had a belting run on the stalker and duly landed a perfect mirror of 22lbs 8oz, a great result and you could almost see his shoulders lift as the weight of the monkey left his back. 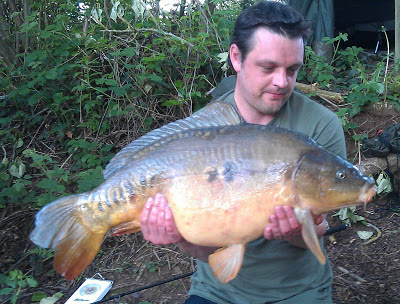 We left him to it. How I envied him his night, the atmosphere was electric with nature running at full tilt to catch up after the lousy weather we've had this year. I told him to enjoy the dawn chorus and we were gone.

I had a text a little later; half an hour after our departure he had a right old tussle with a "scraper twenty" (oh how quickly the attitude changes) on his cane rod. No pictures alas but I felt sure he would make do with just memories. I texted back my congratulations and predicted a busy night.

This morning I had another message, 'PB in the sack, come take photo's'. We got up and jumped in the truck. A bleary eyed Neil appeared from his bivvy having had little sleep, one fish landed, lots of false bites from bream and bats and a very long and loud dawn chorus, heaven. The fish was duly given a number (28lbs exactly) and the shutter clicked. I felt pride and relief in equal portions. 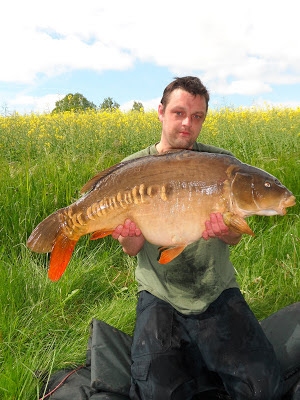 
This afternoon I visited the river and started the job of preparing swims and tidying things up. It was warm and everything felt good as I strolled the bank enjoying the sound of the running water. Having done a bit of swim clearing with my slasher, I wandered up to the Peregrine's nest. We've had Peregrines nesting on this stretch for several years and its always good to see them back, I didn't have to wait long. The loud 'kah-kah-kah' is so distinctive only this time I heard the sound of youngsters as well, it was feeding time. I grabbed my binoculars and scanned for the nest. It was only when the female flew off that I managed to zone in on it and there, through the foliage I made out at least one very young chick lifting its head. I'm pretty sure there were two but I'll have to spend a bit of time observing to find out.

I moved on but on my way back past the nest I became aware of a great disturbance. Two crows were chasing the female falcon only she, unlike the docile buzzards, was having none of it and she'd stall, almost hover then turn the tables and chase one of the crows which would dive into the trees only to be harassed by the annoyed Peregrine. Of course, as she was distracted, so the other crow would attack and the hiding one would reappear and join in the fray. This went on for a while until the male joined in and the female left him to it, the aerial display was a joy to witness even if the potential outcome was unnerving. I hope the crows were just trying to protect their patch rather than targeting the nest.

Anyway, peace and quiet resumed with a proud male Peregrine sat on a dead tree looking out over its home range, occasionally calling to the chicks and the incoming female. If anybody can find a more entertaining way to spend twenty minutes I'd love to try it.