I cursed the wrestling ability of bedchairs and sleeping bags as I set up my little shelter next to the lake. Its the worst bit of making your temporary home as the bed is heavy, unwieldy and barely fits in it but I scored two falls and won the bout.

The lake looked oddly coloured and was flat calm, disturbed only by the many small roach that live there, dimpling the surface here and there. But the banks and especially this swim looked undisturbed which is what this place is all about - solitude. I was soon baiting the channel on the far side and hoping that a patrolling fish or two might find my bait over the next couple of days.

As I'm still nursing an ailment or two I restricted myself to one rod - a Hardy LRH - and a horrible plastic Daiwa Regal because it was the first one I found in my store of such things that could be switched to right hand drive. Feeling a little disadvantaged should the moment of panic arrive in the night, I went through my bite reaction routine in my mind then got myself some food and sat reading until dusk. Heaven. 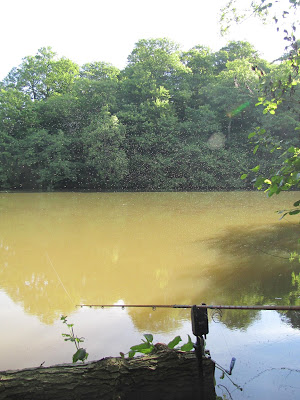 I dropped off but was suddenly aware that Cane - on lesson one in being a bivvy dog, the overnighter - was up and growling. He'd had a right go at a couple of swans and the three herons that flew in together but we'd had a chat about that and had been quiet calm. But now he was bristling and started to bark. He leapt forward to go off and chase whatever he'd heard but I grabbed him and sat calming him for a minute or two when I had a bleep!

I found shoes and head torch and was at the rod as a nice run developed and I lifted into a solid weight. In this swim the fish sit in a gully which takes a bit of persuasion to get them out, then they come begrudgingly through numerous but sparse weed beds and I've found that a steady pump and wind will usually win the day. This fish however, was feeling particularly stubborn and I was twice met with stalemate but, the rod has a lot of power and I just kept the pressure on and slowly but steadily the fish moved again.

Do you know what I mean when you have doubts about your hook hold? I had full confidence in my set up but I was wondering about just how this fish reacted to the pressure... or maybe it was just BIG!

As it approached my bank so it kited right - like they all do. There's an overhanging bush in the water and carp just feel the need to pop over and have a look but I put on plenty of side strain and kept the rod low..... it worked. Then it decided to repeat the manoeuvre but at high speed so we went through the same little routine and back it came but it kept going for the tree on the other side. The rod was now bent to the handle but I don't mess about with fish and this one was coming in.... and it did, right into the waiting net.

I rested it for a few minutes whilst I went through the laying out and wetting of unhooking mat and weigh sling and found the camera. I then lifted my prize from the water and felt the colossal weight in the net. As I climbed the bank to the flat area where everything was laid out, my back was telling me that I'd overdone it but I gritted my teeth and gently lowered the fish and unfurled the mesh.

Bugger! There, neatly in the root of the left pectoral fin was my size 8 hook. I gazed in awe at my biggest ever carp and said out loud "You don't count mate". To make it worse the fish had crapped out loads of my bait so it was feeding and I may have simply used too long a hair. I was gutted but went through the vein process of weighing it and took a couple of snaps then slid it back to it's watery home where I promise, I shall do everything I can to remake the acquaintance. 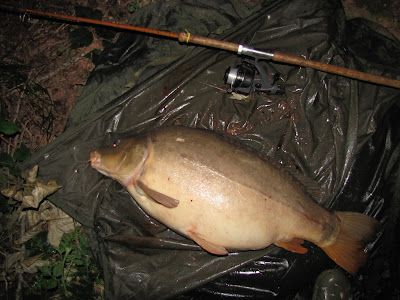 It was only a little after midnight but I didn't recast. I got back into bed and slept well......... eventually.

When I woke I felt a little like someone who'd put their winning lottery ticket through the wash but soon shook off the disappointment, after all, a day that felt pretty fishless had produced one and today the wind was pushing hard up to the narrow end of the lake - stalking time.

I headed for the bay and found a few nice fish basking, only one was stirring up the silt and it was impossible to get a bait to it. Never mind, I know a place. Once there I set a little trap near a lily bed and retired to write my diary and to educate a manic dog that he doesn't need to run everywhere and that not all squirrels need chasing. So he went for a paddle - through the deepest, smelliest marsh mud you could imagine.

Out of the blue the rod was away and I grabbed it - right handed - then fumbled to change hands and struck. There was a weight then nothing - Bugger again! This was followed by a spell when I forgot how to cast and use a catapult. I sat and sulked until the curse lifted but I knew this swim was a bust.

I made the long steamy walk back to the car and headed to the nearby village for an ice cream. This lifted my mood and I was soon back at base and fishing on my first choice spot. I spent the time watching the thousands of midges that formed a little insect tornado in front of me. By following individuals (not easy), you could see that they flew quite steadily up and down an area where the air was evidently warm. Its when they reach the turn point that they appear manic and give the impression of a swirling confusion, its just a trick of the eye. 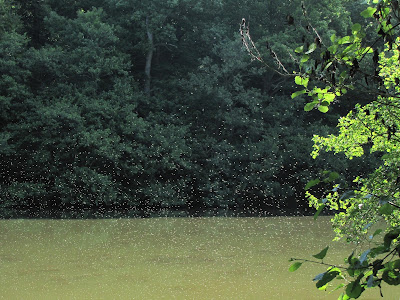 Such heady observations were interrupted by a run at a little after 2pm. I suspected bream but was soon in the old pump, wind routine as another lump came towards my bank. No drama apart from a late flurry and a 26.7 was soon returned. I was very satisfied. 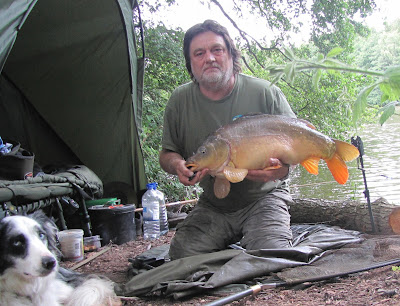 That evening at about 11.30 I was away again. I leapt out of bed and went into my routine of head torch out of the right shoe, both shoes on, close bait runner, lift into fish... However, a dog, deeply asleep and laying on my shoes failed to help in the dark. I went by the light of a June sky and returned for the light once the dog had sat up and yawned.

This fish came in like a sack full of kittens and was literally wound to the net. I have to say I was unimpressed and, as guide to just how blaze you can get about fish sizes, I considered returning it without so much as a photo. I soon came to my senses and did the deed after all, it was 25.8. 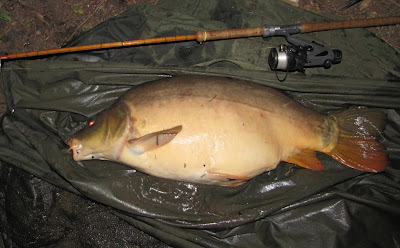 Again I opted for some kip and a rest of my bones rather than face another night time frenzy. My sleep would have been a good one except that Cane decided to jump on the bedchair and sprawl across me taking up most of the room. He's still got a way to go to get his certificate as fishing mutt of the year. 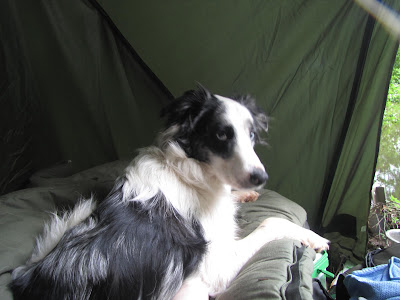 The next morning a bite brought my first tench from the venue. I've seen some nice ones in the past but this was just a small male and it did its best against over-heavy gear. There was drama at the end when I left the fish in the net for a moment and it discovered the hole some wretched rodent had made. I had to land it again with the line running out of the net and back into the top.
I was honestly happier with this fish than the wimp of a carp that I'd had before. Funny thing fishing. 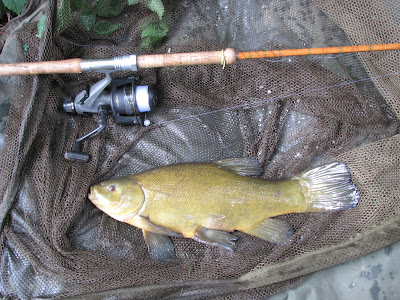 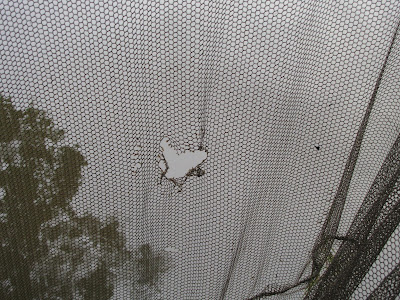 The next couple of fish were small bream and were met with less enthusiasm.

A trip with highs and lows, a test of my honesty (what would you have done?) and a mind boggling struggle with size and values. I can honestly say it was great fun 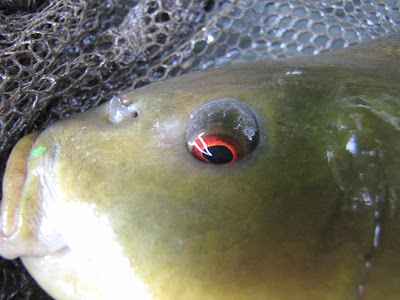