The Blanks Have Ended

My diary has an index, just 'Date' and 'Catch' columns so that I can quickly look up a particular day from the fish caught. Not the most accurate or detailed record list but usually enough for me. Before today there were six dates recorded in 2016 and apart from a few fish taken from the River Tone in February all of the others have just said "Blank".

I know that a bad run can befall any of us and heaven knows I have always been inconsistent in most things. I've gone for longer periods with a dry net and it has, at times, got under my skin but I have rarely had periods of such miserable luck. Not just fishing luck, oh no, the kind of misfortune that keeps you awake at night along with that which makes serious dents in your bank balance. It's been a pretty dire year thus far.

Then the sun comes out and suddenly the trees have taken on a mantle of green, the swifts are screeching overhead once more butterflies emerge to brighten the hedgerows and fields and everything feels just that little bit more bearable. It is time for a trip to the lake to see if the late Spring has stirred the fish. 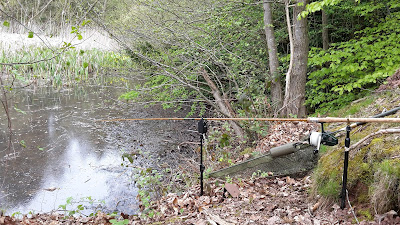 One other angler was set up on the southern bank, doubtless casting across to the tangle of fallen trees where the fish like to bask. That seems somehow impolite, to disturb the fish in their home, I much prefer to intercept cruising fish. I parked on the north bank and walked, searching for signs of fish and movement. I had reached the top end shallow without so much as a glimpse and faced the prospect of a return trek to a plan B swim where I would hopefully find something on the fin. But wait! In the bay, quite barren a few minutes ago, a dark shape hovered, drifting slowly over the far side. That's all I needed.

I quickly sorted myself out and put a pva bag of broken boilies out with a few more scattered around it. It was just after midday, a late start but I was full of hope. Twenty minutes later the bobbin lifted and a slow but determined run developed - and I missed it. Not long after the same happened again. Bream were doubtless working the bay and that always makes life difficult. I have enjoyed many a day's bream fishing in my time and, unlike some so-called 'specialist' anglers, I do not unhook them with my foot. But they can be a pain in the proverbial - and were today. 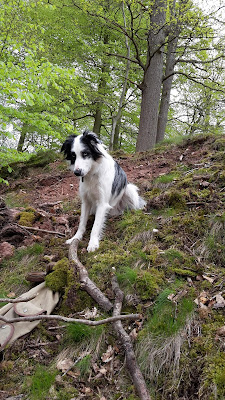 It soon went quiet but there were no signs of carp either. Neil texted me and suggested 3.15 pm was a good time for a bite there. He's always banging on about '3.15' but I've never found it particularly good, indeed I couldn't remember action of any sort at that time. I put another bait out and sat back enjoying the wildlife and the warmth. Cane, my dog, steadily built a bonfire around me as he tried to induce play in between seeing off pheasants. I took out my latest book Rivers Run by Kevin Parr and enjoyed the first few chapters until a shout from the Delkim had me leaping over a dog, at last prone, and reaching for my old Hardy rod. It was 3.12pm and I was in!

I was fishing through little more than a gap in the trees and, to get control over the running fish, I had to go for a paddle. The water was cold and the dead leaves and silt pungent but, standing in water surrounded on three sides by trees and reeds, I am never happier. Getting down to water level to play a fish is so much more personal that standing aloft on a high bank, this was almost eye to eye battle and every turn and run of the fish felt electric.

With my prize finally netted I stumbled up the bank and rested the fish in a more accessible spot whilst sorting out the scales and camera. A pretty linear fish just one ounce over that magic 20lb mark. A suitable reward and, with wet, stinking feet and an empty flask I trudged back the car and the long drive home. Today the diary index will have a different entry. Happy days. 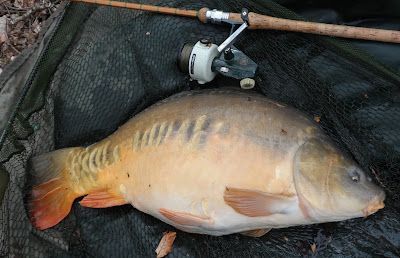