Back On The Banks Of The Wye

The lake held its spell over me a little longer than usual this year. I still have a strong hankering for some stalking but the disjointed weather has stopped me a couple of times and then I succumbed once more to the Siren call of the Wye.

I had a couple of short evening sessions away from the crowds in places I liked the look of. Chub, chub and more chub was the result but each was hard fighting, slim and very fit. I then dropped into an area that I usually frequent in the autumn and again it was the chub that first knocked on the door. Then something significant happened.

The rod bounced a few times  as something swam upstream oblivious of the weight it towed behind it. I struck. The next few minutes saw me feeling undergunned as something plodded along the bottom refusing to comply with my encouragement up through the water. Eventually it ran with some determination, straight through a snag! I heaved and ho'd and could feel it throbbing against my efforts. It soon became solid and I was aware that the rotten thing had transferred the hook into a sunken branch. I was left to pull for a break and see out another trip without a barbel landed.

In the recent past I've had carp around the thirty pound mark, drop off almost within netting distance. I've shrugged it off with my usual attitude of 'can't win 'em all, I'll get you one day'. Losing fish is a gut wrenching feeling but I thought I had moved on from the angst and could accept the slings and arrows with a new found maturity. But that barbel stuck in my craw like a breeze block. I had to catch a barbel.... and soon.

Two days later and I'm just downstream where I hoped it would be less snaggy. A chub came to the net within minutes of starting and conditions felt just right. I concentrated on the rod for any movement.

When it came it was another bounce and a twitch or two on the line. I wound down and hit into a barbel that became the first landed of the season. Not long after, my feed of groats and hemp laced with 10ml Questrami boilies induced a rasping take. This one went a little larger at upper six or low seven pounds. I was on a roll and thought I'd cracked it but I soon again felt the force of a strong fish only for it to scream downstream and into yet another snag. This time I broke off on the hooklink. 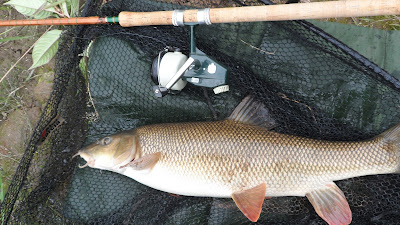 Only chub played after that but one looked worth putting on the scales as a sighter. I rarely weigh chub but, early season, I put the occasional one on just to get my eye in. I put it down as a decent four but the needle hovered just past the five so I was glad to have taken the effort.

It was a glorious evening and I am now looking forward to my next visit but I haven't quite finished with the carp just yet.
Posted by Dave Burr at 14:07