Its that time of year when a walk by the river is accompanied with a liberal pelting of flying seeds as the balsam pods burst. Himalayan Balsam is an alien invasive species that has taken over large amounts of our river banks but it has proved to be an excellent source of pollen and is always surrounded by numerous white bees as they get covered in the light pollen. As invasive as it is it does then have a use.

But its the seed pods that make it an interesting plant as they contain a spring like filament which, when the pod is ripe and dry, coils at incredible speed and flings the seeds for quite a distance thus ensuring a well sown crop for next year. I can never resist pinching the tip of a ripe pod and often jump at the ferocity of the little seed explosion. Ah well, little things.................. 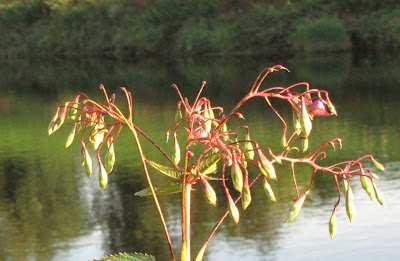 But the ripening balsam heralds the peak of the barbel season and I shall expect to catch on every trip over the next month or so although this didn't quite work the other day. I visited the scene of a previous capture and prepped the swim ready for the evening feeding spell. I sat back and waited.......... and waited.

The bird life slowly changed from day to night residents and where I had been watching a blue tit fly out from a bush to catch flies on numerous occasions, it eventually flew past me and off to join the rest of its group that had passed some time earlier. As the light values dropped so the green of the trees to my left faded whilst those with their backs to the last of the sunlight were silhouettes. This caused a stark contrast of reflection in my swim and it was across this light/dark line that a kingfisher flew so low that each wing beat left little expanding circular ripples on the water surface, I don't recall ever seeing that before.

My line tightened - I tensed - the line relaxed and stayed that way. The owls were in full chorus as I left.

My next trip was to have a go at trotting a long glide but despite feeding bread and hemp I didn't get a touch but when I put a feeder over the area I had a little barbel straight away. This was followed by several chub that played with my shaved boilie bait before taking it. A switch to bread on the hook saw the rod hoop round several more times, the best going over four pounds. 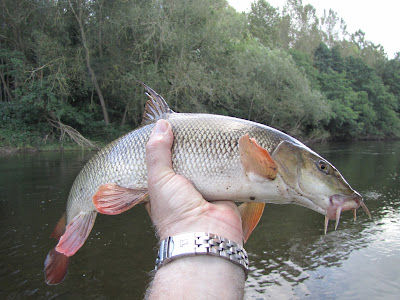 Then yesterday my old mate Dave Steuart and his chum Dicky came to the Red Lion for a few day's fishing. Poor old Dave (at 82 he is definitely old), had taken an eternity to cover the distance from his Hampshire home due to hold ups but after a brief rest he was off full of beans and ready to fish. I put him in the swim I'd trotted the day before but although Dicky had a couple of barbel from a few yards upstream, Dave had to make do with chub and dace.

I had a mooch around the fishery and dropped into a favoured spot that tends to produce quite quickly, I saw fish immediately and set my trap, it took just three minutes to get a fish, a barbel of exactly eight pounds. I lost another due to the hook point getting turned in when I moved the bait over the gravel so I rested the swim.

I had a chat with some other friends then returned a bit over an an hour or so later to my spot and within twenty minutes had a slightly larger barbel, that was enough for me. 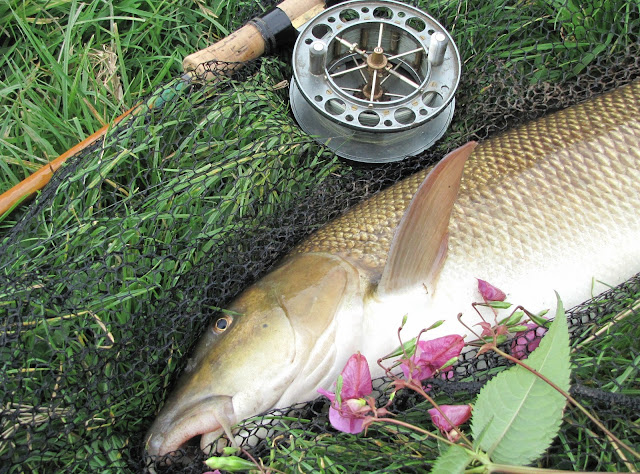