Once again we gathered at that chosen place with a view to catching a few barbel and enjoying a bit of a social. There were less of us this time, just a dozen of us made it due to family, work and financial issues or maybe the appetite isn't as strong nowadays?

Paddy stayed with me on Thursday night and was eager, as ever, to get to the river. He sat on a long pool with an equally long history of fine catches be they salmon or barbel. He was happy lobbing his enormous swimfeeders out, making a splash like a horse falling off a bridge! I snuck around the corner and sprayed hemp and maggots across then trotted through them with a large waggler float. Unfortunately it was just too far to fish with the centre pin and I was soon using a light carbon rod and a fixed spool but the float soon buried and a battle scarred old chub of four pounds plus came begrudgingly to hand.

I greeted one or two of the new arrivals as they passed before hitting another hefty weight. I was certain that this was a barbel as it plodded deep and upstream but it lifted in the water too soon and came in with little drama, another four pounder was returned. I can't remember if it was Richard or Hobby that watched me land that one but as I spoke to them I said I was amazed that no small fish like minnows, bleak, dace or little chublets had come to my maggots. I then greeted the long overdue Bunny (he always get's lost despite the best efforts of his Garmin) and set him up next to Paddy.  Back in my swim and I had dace after dace after dace, me and my big mouth. I went for a walk and watched Tony who had been missing bites - although I never saw his rods move once :-) 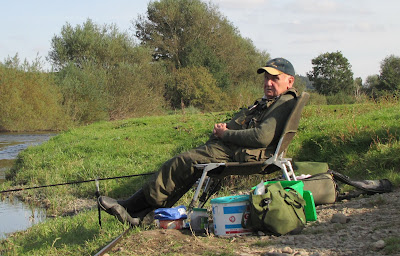 It was a struggle, the only barbel caught all day in the cold water, which had risen several inches due to reservoir run off rather than warm rain water, was foul hooked by Bunny and weighed about two ounces. But some chub were feeding, I went back to my swim and fished the lead, missing a couple of pulls from the wary fish. I shortened the hair and hit the next, a 5.02 chub.

The evening was the usual blend of anecdotes and alcohol, I went to bed at a bit after 1.30, the tireless Carl and Hobby were at least two hours behind but up ahead of me for breakfast.

Saturday was cold and bright, hardly ideal but with determination lightly tinged with apathy, we headed for the river. Everybody had an idea of where to fish including me, I was sure that we'd catch in a fast run next to a deep hole. I was wrong. So I went for another walk.

Chatting to the guys along the way it was obviously going to be another struggle but spirits were lifted when Paul's mate (sorry, can't remember your name), had a barbel of about six pounds. I eventually got sorted out and moved to the swim Bunny was in yesterday, Bunny was just downstream having taken a chub and a bream whilst Paddy dropped into a deep bend above us. I lobbed a feeder upstream to sink the line and hopefully outwit one of the highly pressured fish and about 20 minutes later the end of my rod signalled action. I was using the Mkiv carp rod that Bunny gave me a while back, I'd told him that as a rod it was wonderful and had taken chub (including yesterday's) to over five pounds and a personal best perch but tended it to avoid barbel for some reason. That changed as I hit a heavy weight that roared off. To an audience of canoeists that stopped to watch the show, I landed a 9.01 barbel. 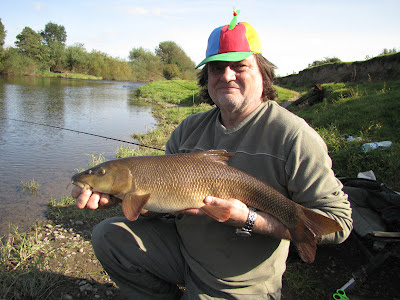 The pressure was off but I still tried for more in vain. News started coming in of more captures and it was soon time to retire to the bar. We left the water to a backdrop of a blood red sun set. 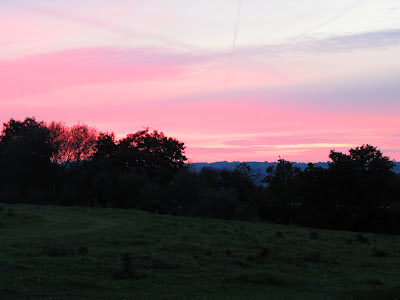 Half of us had barbel the best to Paul being a low double, Des had three and several of those caught were nine pounders. Rich Walker had half a dozen big chub to over 5lbs and a 9.07 barbel, there were smiles all around. 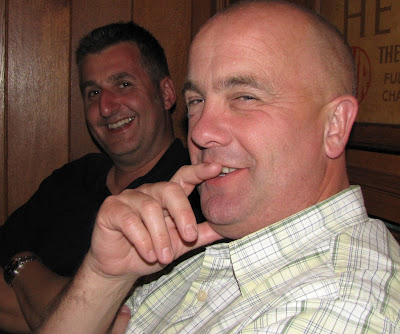 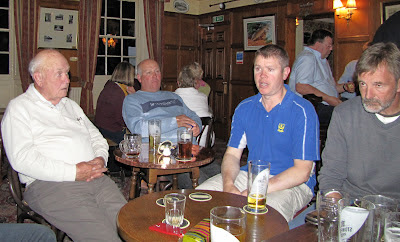 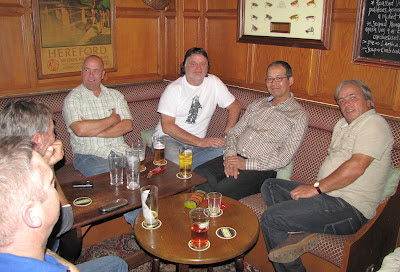 The evening was subdued, as guys got up to move it was accompanied by groans and careful positioning of limbs, despite all (apart from Bunny of course), being mere 'middle aged' gentlemen I think we were all suffering aches and pains of some sort. Even that beer machine Tony Rocca sat sipping a Tia Maria due to indigestion - where did that raucous bunch of nutters go? To prove the point, next year's 'do' has been arranged for July as, to quote Rocca, "it will be warmer then".