I felt a deep necessity,  a need to catch a fish. I know that I've nibbled at the edge of the start of the season and that the taste has been quite bitter but suddenly the hunger had become a starvation.

I made my way (gingerly) to a spot where I would be sat on a level area and fishing virtually under my feet, even in my fervent state I wanted a degree of comfort a consideration that, at one time, would never have crossed my mind. The river was holding extra water (as it will for some time yet) but I know this swim and despite the boils and swirls on the surface, the fish will feed on the hard, gravel bottom. 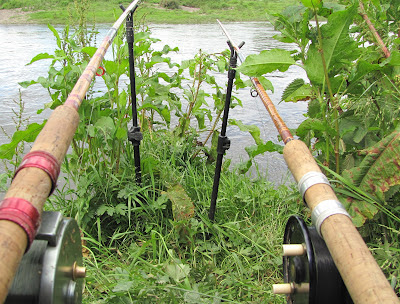 I felt another 'need' and that was to catch on a cane rod, maybe I've been reading too many books by 'traditionalists' but it somehow felt appropriate on this day to give the bamboo an airing. I set up two rods with accompanying pins and sat back confident of action. The surface of the water moved this way and that as the river surged along its confused path, the occasional whooshes and gurgles as a hump of water sought to spread itself between the banks made Harvey sit up and listen and look. 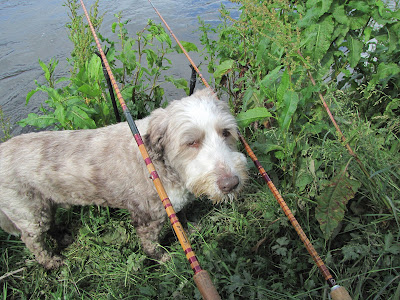 This was Harvey's first proper fishing session and he passed with flying colours. He shares a fascination with water that many dogs seem to have but he avoided swimming - fortunately, and was content to pad up and down the bank sniffing out the new smells and every morsel of dropped bait. He has yet to learn that the rods are a 'no go' area but maybe I need to learn to raise the rests a little to enable him to pass under them. He settled and gave the fish I caught nothing more than a passing look but watched, spell bound as a duck and her chicks swam past. He's coming along just fine. 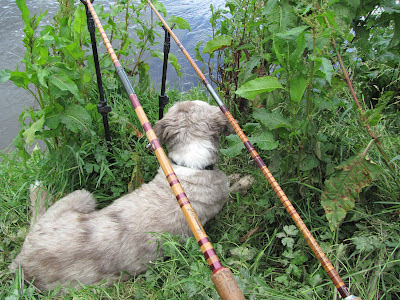 With a wet landing net and a set in my rod, it was time to leave. Another short session but an important one, I am mobile-ish once more and am off the mark. 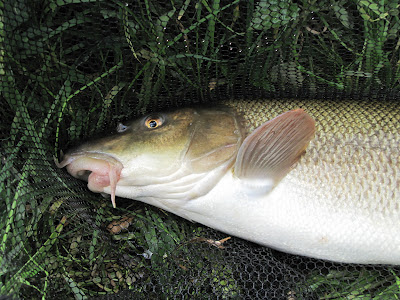 Another serendipitous event followed when, after much bowing and tugging or forelock's, I managed to secure a place for Neil on my syndicate lake. Green with envy since I joined Neil has understood that such venues do not come often and I have had to wait some 55 years before my opportunity arose, he begrudgingly accepted the chore of patience so, when I broke the news to him it took a while for it to sink in, he then became rather excited. I am too, I've wanted him to enjoy this lake since I first saw it and I'm really looking forward to joining him on a few sessions in the near future. No doubt you will duly hear about them.
Posted by Dave Burr at 11:16