The day started with an attractive black girl massaging my buttock with her pointed elbow followed by her placing her hand on my pubis - and mine on hers - as she demonstrated a breathing exercise. I've had worse experiences and, feeling frisky due to the movement in my back and leg (what did you think?) I headed for the river.

I started writing my diary only for the pen my run dry, I'm not sure whether pens count as technology but this was a day when such things were not running well. When I did catch a fish I decided to try out the remote shutter release on my new camera and the test shot went okay, all I needed to do now was to get my position right, hold a slippery fish whilst maintaining the correct position on a greasy slope and use my spare hand ( ! ) to operate the camera. It was a bit like rubbing your tummy with one hand whilst patting your head with the other but done on ice skates. I failed. Certain that I'd taken three or four decent shots I returned the fish only to find just one poor image with half the fish in it.

I rang Neil and we discussed the ongoing saga of his car, the garage and the replacement of a series of engine sensors that were needed to placate a temperamental engine management unit. Guess who'll be settling the bill. He then told me that the screen had broken on his mobile phone again and I decided to turn the conversation around to my fishing story when - phut! My phone died without warning and irrevocably. It was just one of those days when technology was playing up and I was glad I don't have a pacemaker.

For the record I had two chub, one of which was easily five pounds and a barbel of ten pounds five ounces so it wasn't a complete failure. 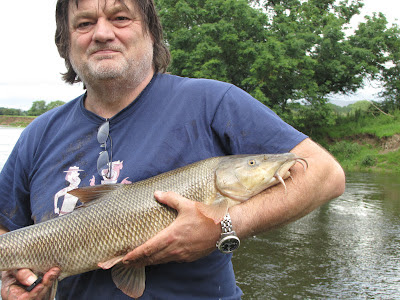