Size Matters, or does it?

Over on Gurn's excellent blog he's debating whether or not to include the weight of his fish when he writes about them, the matter has been put to the vote and so far the majority are in favour of the weights being shown. For the record, I voted in favour as well.  In this country its the weight of our fish that we use to gauge our success even though the fish one angler catches on his water bears little relationship to what another catches on a different water. Be that as it may a 2lb roach, 5lb chub, 10lb barbel or 20lb carp are all standards that we recognise and aspire to, its a universal standard by which we compare venues as well as results.

Having said all that, I am aware that as I age and adjust my attitude to life and fishing then the size of fish caught means less than the pleasure that it gives me when I actually catch it. Sure, a big fish is usually exciting just by virtue of its bulk and fighting ability even if its only the effort needed to lift it out of the water. Some of the most pleasurable fish I caught last season were a few modest grayling taken on Tony Rocca's cane rod, not only was the rod highly effective in dealing with their twists and lunges but I was overwhelmed with a flood of memories of fish caught in my youth, so much in fact that I am expecting a cane float rod to arrive at any day.

So, the size of the fish we catch isn't necessarily important but what about the size of those we lose? This is a different ball game and one which was brought home with a bit of a bump this afternoon. Neil and I went to the lake for his first session as a member. I gave him choice of swim and set up nearby casting a rod toward a bed of reeds with a second rod just out in front of me on the line that carp often patrol. The wind was in our face and a few fish were topping and rolling, things looked good.

A carp rolled quite close in to my right and a few minutes later I had a screaming 'take' as it ploughed through my line and bolted out into the lake leaving an enormous bow wave behind it. That was a disturbance I could have done without but I recast and sat back to settle my nerves when the same rod was away again. This time the bite was genuine and I hit a heavy, ponderous weight that reluctantly turned and allowed itself to be slowly pumped toward the bank. Neil, who had only just got his first bait in the water, came over and held the net as a big fish wallowed toward it when .......ping! The hook pulled. I was only saying to him the other day that I haven't lost a fish to a hook pull in ages and here I was swearing through gritted teeth at the sky above. There is a unique sensation when losing a fish, any fish, it pulls at our core and the loss of a big one is just a pummelling of our emotions that seems way beyond the value of a mere fish but trust me, this fish deserved every ounce of that emotion as it had long since passed the magic twenty mark and was somewhere around that next milestone. The size of that fish mattered - a lot - as I licked my wounds.

My sulk was soon diverted as Neil cast to a rolling fish and had an immediate take only for that one to come adrift within a few seconds. There was me bemoaning the loss of a fish that was probably short of my personal best from a water that has provided me with plenty of big fish and will no doubt provide more in the future yet Neil had just lost his fish from the lake, a fish that would have lived for ever in his memory. Both of those fish had the potential to make a great day's fishing and both had slipped through our hands - such is life.

The wind dropped after the rain passed and the water became quiet with little surface activity apart from the masses of fry. As the clock approached seven Neil decided that he'd best not use all his Brownie points up and decided that returning to the little lady early would buy him a few hours on the lake later in the week when conditions may be better. We decided on a last half an hour and mid-way through the countdown I had another flyer. This fish fought hard and kited in a wide arc before it plunged into a weed bed. I kept steady pressure on it and it yielded, running along the margin of my bank and into the net held by Neil. It was way below the weight of my first contact but still looked bigger than the 20.01 that the scales recorded. So, another twenty logged and a successful trip, would it have mattered one jot had it been two ounces lighter? What would it have weighed had I lost it? Gurn may be onto something. 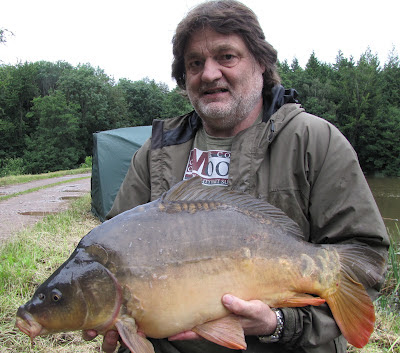