When I'm not driving around the country in my van solving mysteries, I do a spot of guiding.
I'm not one of those that have a web site or that shouts about the amount of fish they have caught, I just do it as it crops up, usually through the Red Lion. To be honest, I don't want to do many days a season as I find that going over the same old shpeel each time is a bit boring and also, I put myself under pressure to find fish especially when the going is tough. If I'm guiding I want my client to catch, there's nothing worse than a blank even if they go away with an injection of knowledge.
Anyway, this week I had Mike Perry with me. Mike's been coming back to me for about five or six years, the poor misguided (literally) fool. He's a great bloke and a day with him is always fun despite his appalling catalogue of jokes. Mike brought along Angus and Andrew, neither of which had ever seen a barbel before.
Due to them making a minor cock up in the arrangements with the Wye an Usk, the beat was booked for Monday even though they were not fishing until Tuesday and Wednesday. It would be a pity to waste it so I had a dabble myself with Neil.
We walked the bank and spotted a few desirable places. I opted to explore as I had to find at least three goer swims. 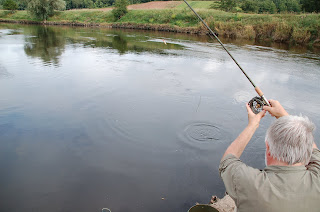 First cast and I bumped a lump of meat over a shallow gravel run. Meat is a great way to find fish and as the weight hung up on a rock, I felt a pull and landed a little barbel. Oh dear! I hate catching a barbel first chuck, it usually spells doom for the rest of the session and this day was no exception. Try as I might, I couldn't find another fish.
Two days later and it had all come together quite nicely. On the first day Mike had a few barbel on the float whilst the others trotted hard all day but only had dace and chub to their names. It doesn't make my job any easier when the guests insist on catching on the float but hey ho, its their day so I have to do my best. 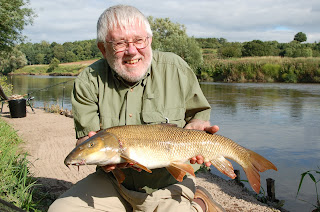 On the second day Angus had a couple of small barbel on float gear but later sat restless and bored (he's a trout angler in the main), waiting for his lead rod to go. It didn't.
Andrew moved into the area where Mike had taken a couple of eight pounders and finally got his first two barbel, the best of which went seven pounds something.
It was hard fishing but two more men have been initiated into the barbel anglers guild - job done. 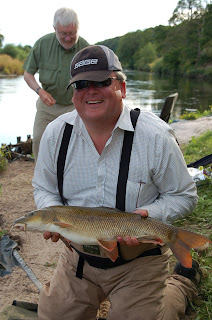