Have you ever been to Cheddar Gorge? Its a lovely natural phenomenon in Somerset where a glacial cleft has rent through the Mendip Hills leaving shear granite cliffs, the home incidentally, of the Cheddar Pink, a flower that only grows in the special habitat.
I used to drive through the gorge quite often and although there lies within me a strong urge to climb, I never once thought "what I'd like to do today is to climb to the top of that cliff then back down again, sit on an uncomfortable rock for twenty minutes then do the whole thing again and again and.....
Have you ever fished the River Teme? Well the above applies there too. Its bloody knackering!
I fished on Dave Mason's section yesterday. Mase is off to France to catch some big carp so he let me and The Boy have his river - bless him.
So I dropped into swim number one for the day, a perilous decent into the depths of Mother Earth, and put a shaved down boilie and small pva stick out onto the gravel river bed. I then pulled the fish in by tossing pellets to land from a hight causing a 'plopping' sound which the fish associate with food. Sure enough, a few (far less than in years gone by), barbel appeared and after twenty minutes or so I was attached to my first barbel. Its great when a plan comes together.
I extricated myself from the swim, belayed onto a ledge for a rest before mounting the summit, planted a flag and went for a wander to find the next challenge.
It was hot, a sultry, sweaty sort of hot and after a few hours of descend and climb, descend and climb, this old fat bloke was cream crackered. I decided to do the best thing and had a kip in the shade.
I awoke just in time to greet The Boss as she arrived with provisions. A barbie and a coffee put the world to rights and despite aching back and screaming knee, I hobbled off in search of feeding fish. Despite the early success, we found the fish very nervy and not inclined to get their heads down. But I returned to a swim where I had at least seen some fish earlier and dropped my rig a couple of yards out into some very shallow water. I had a running commentary from The Boss who was sat atop the bank.
"There's a barbel in the swim" came a stage whisper. Followed a few minutes later with "Dave, there are six barbel in the swim!"
I had a pull, struck! and my bait, lead and modeling clay backlead all flew past my ear as I made a right hash of it.
"Dave, there are no barbel in the swim" came from behind me. Sarcasm really is the lowest form of wit.
I tried again and just when I thought it was no use, the rod jerked round and I was into another fish. Unfortunately it weeded me, no problem, I have plenty of tricks to get a fish out of weed, and I first tried to bounce it out. If you bounce the rod tip it often brings the fish either through the weed or makes it bolt from it. Today it made the hooklink snap! There must have been something hidden within the weed as I didn't put 10lb of pressure on the link but hey ho, such is fishing. 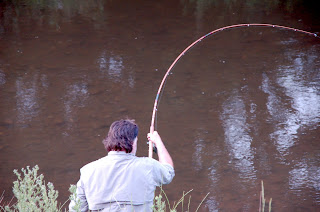 "Stay away from that weed bed you cad!" 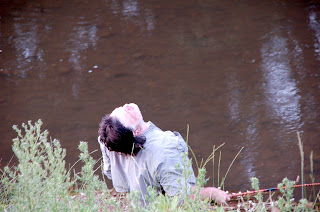 "Oh dear, the line has parted, how unfortunate"
And that was the end of the action. Just one fish to me and one to The Boy. Modest returns for such an arduous adventure. But it is a beautiful place to spend a day, gorgeous in fact (get it?), and despite the aches and pains that always follow, I am looking forward to my next Teme challenge.
Is this you?
If your IP address is - 86.160.89.3 - can I ask you to stop trying to log into the Barbel Society site using my name. I haven't had a password access to the site for over five years so you really are wasting your time.
Posted by Dave Burr at 10:52