A walk around the lake

I haven't fished for nearly two weeks. I took the Boss away last week and when I went to the carp pool at the weekend there were already two people fishing it so I left them to it rather than make the place look crowded.
Today was one of those wonderful June days where yesterday's rain had made the countryside look especially green and lush. The path around the pool is becoming quite overgrown, a sure sign that some of the early season hopefuls have given up on the water and have left it to the likes of me and one or two others - excellent.
The Boss was with me and it was Nicky who spotted the first carp drifting out from the shallows. It never ceases to irk me that she is a better fish spotter than me but there is no denying the fact. Ah well, at least I found the next few, a group of four fish were circling an area that they had muddied in their search for food. "Let's get the rod" said Nicky. But I was quite content to watch them for a while then to put some feed in the area, its tomorrow when I'm going to give it a go, they can wait until then. 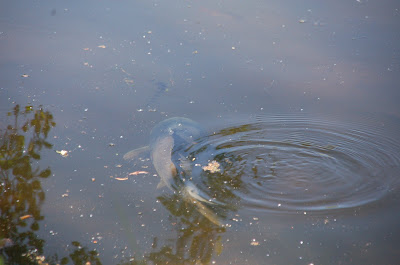 Its funny but I'm never in a hurry to catch a carp, they look so serene when they are in their environment that I find it difficult to disturb them. Even in my twenty's and before I'd even caught a double, I saw a good carp feeding right below me in the town section of the Tone at Taunton. My tackle was in my car not 30 yards away yet I stood and watched that fish feed until it swam off across the river. I was enraptured by the experience. Don't get me wrong, I can get as high tech and bivvied as the rest of 'em but sometimes, when I'm up close and personal, it just seems too rude to impose.
The lake was engulfed in bird song, so many different species but the Tree Creeper is always a favourite to watch. The geese and coots have done well with their broods, although one of the canada goslings has gone seven remain whilst the six greylags youngsters are all doing well. Its just a pity the lake surround is ankle deep in goose shit. 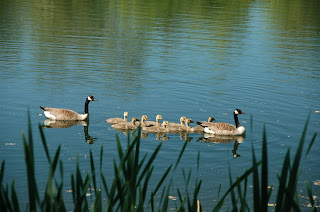 I've also been busy at the river, cutting back the balsam to make swims, painting signs and giving the stiles an appropriate thump or two with a sledge hammer, the usual pre-season stuff that I have to do. Its a tough old life, spending all this time by the Wye or a carp pool but I suppose somebody has to do it.
Posted by Dave Burr at 21:31