Wednesday wasn't such a bad day really. England won, the Boy came home from college and we went fishing. Oh yes, my back was starting to feel easier as well and the garden's been done in my absence ;-) Win, win all around.
I did laugh at the joke doing the rounds before yesterday's game. When asked if they were going 4,4,2 Capello said "No, we are going 747, they are bigger and you get more leg room".
I found the game frustrating. There were little glimpses of a side that knew what they were doing but for most of the time it was a fairly dire affair. Okay, we created a handful of chances but this was the equivalent of Chelsea v Plymouth, would anybody claim a scrappy 1-0 as a great result then?
The National side has much improving to do before Sunday or its all over. Some teams gel and improve as competitions progress, fingers crossed and all that but I may yet have a slightly soiled flag for sale come Monday. 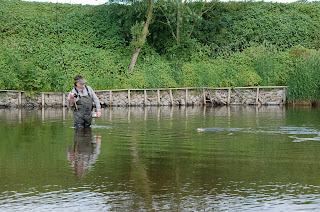 Since I last wrote about the fishing it has been chub all the way. The river is full of chub, always has been but this year there seems to be a large number of chublets and fish between one and two pounds which is great news for the future. In these days where rivers are suffering poor recruitment it is pleasing to see such a healthy population.
I haven't seen much in the way of cormorants of late, I'm not sure where they have got to but I'm certain that some will find their way back to us. Talking of birds, I have seen a couple of kingfishers but the numbers are evidently well down no doubt due to the harsh winter. Let's hope they have a successful breeding year and that we don't get floods that may wash their nests out.
So for the next few days I'll be gingerly picking my way along the banks of the Wye, dropping a bait in here or there and a trip to the carp pool is definitely on the cards. Sheer hell. 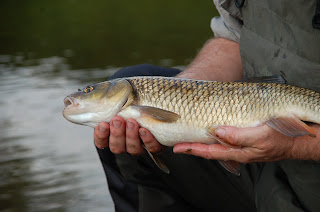