Dare I say it? But I really do think that the river needs a drop of rain. The bright conditions and low levels are making the fishing a bit of a struggle, well the barbel fishing that is. Not to worry, it just means trying a bit harder and maybe thinking outside the box.
I've just got back from the river and yes, it was difficult. But I walked a section I rarely fish and found a couple of small barbel 'flashing' in some
shallow water near my bank. I tried all sorts to get them feeding and they picked a few of my samples off but, as I'd only a limited bait choice with me, it didn't stimulate them into getting their heads down. I should have prepared some hemp and maybe gone to t
own and bought some maggots. That's the trouble with off the cuff sessions, I decide I fancy a fish, jump in the car and twenty minutes later I'm there. All well and dandy but it does limit the amount of preparation that, a 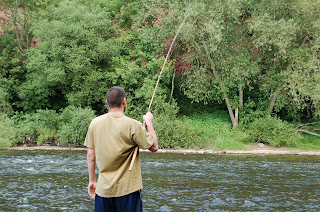 t times, can make all the difference to your results.
Canoes started appearing, the great Hay On Wye to Bredwardine water fight! So I gave up but had to stop on my way out of the field to repaint a couple of signs. I had a look at the river near one of them and saw some bow waves in the shallows. I took a closer look and saw some chub heading for the far side. I had a bit of a look around and found some more under an overhanging tree in a slightly deeper run. I was wearing shorts and sandals so a bit of paddling was called for. I threaded the rod again and tied a size 10 direct to the line before heading for a bar in mid river where I could cast back into the bankside run. I got distracted for a while, turning stones looking for bullheads and loach, like you do. Then I had a few minutes running a pellet through on a rig weighted with modeling clay and I had a modest chub. It saved a blank and was an enjoyable paddle. 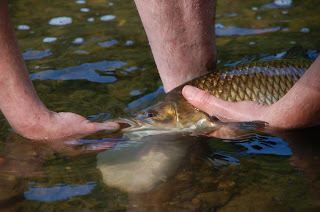 A couple of days ago I sat behind Neil as he demonstrated his affinity with his cane rod. Despite the back pains, I was blissfully content as I sat on a rock with a beautiful stretch of fast water passing me, peregrine falcons overhead and watching my son demonstrate a great degree of skill in using a stick and pin. The fish were proving a little harder to tempt than when I last fished this spot but he had a good chub before passing the rod to me. After a bird's nest or two I got the hang of his reel and the bait landed on the money. My chub was probably four pounds and felt brilliant on the new rod.
A lovely session that was enhanced by the appearance of a tiny grass snake that tried to crawl up Neil's leg. Some days are just that little bit special and this was a short but memorable session that will stay with me for a long, long time. 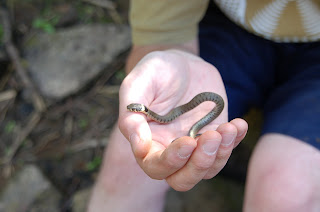