Having bemoaned the winter let's have a few words about the spring.
Spring never ceases to amaze me, how trees and plants that appear quite bereft of life one day can suddenly burst into life the next. The rate at which the colour green can regain its dominance over the countryside is staggering. I imagine the trees groaning from growing pains.
This year I took a ticket on a couple of small pools that hold carp. I have spent many hours walking around one of them in particular and have fallen for its charm. At three acres, surrounded by trees and with the obligatory island, it is a magical place to get to know. 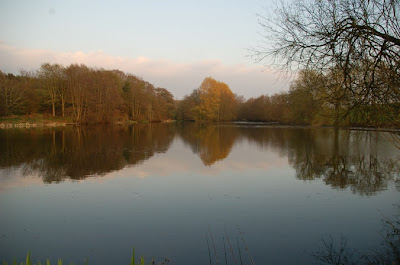 My early trips were spent peering into the water for any sign of a fish but as the water eventually warmed so I occasionally saw one or two of the inhabitants. I didn't visit for a couple of weeks whilst I sought barbel in Spain and on my return I was greeted with a lush green world as life returned. The carp were now there in abundance, cruising in the warm water with fins on display or silently drifting over the blanket weed in the shallows. Getting them to feed was still just as difficult though but a trip was planned. 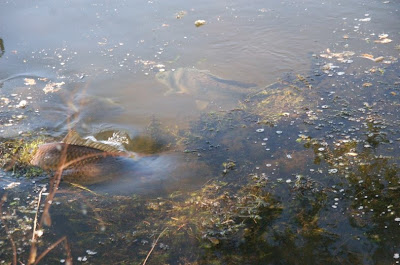 I decided to have a walk around the lake and introduce a few baits before starting my session the following day. Alas, I was greeted by the spectacle of spawning carp. I say 'alas' but who could really be disappointed at the
opportunity to watch such a sight? Carp really are noisy lovers and to see a 20lb fish thrown out of the water by the antics of its passionate fellows is always worth the time and effort.
Ah well, it means I'll have to delay the trip. I don't mind at all, I've got all year to catch some of the fish that inhabit the pool. There's nothing much bigger than a mid-twenty in there although the inevitable rumours of a big original thirty abound. I'm just happy sitting in the tranquil setting of an English lake.
However - carp have been getting to me over the last few years. I have a growing need to catch them... 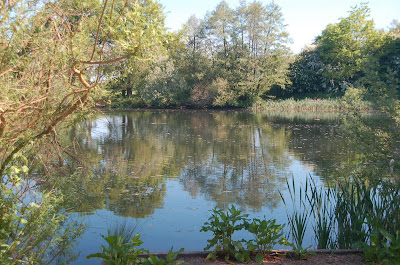 Two years ago I started to concentrate on a one acre pond during the river close season. My lad - Neil - and I had fished it the year before and had taken a few carp but Neil had been frustrated by a number of lost fish, often through hook pulls. He got it right in the end and took one of the biggest inhabitants at 26.7, a fish that came after much effort and was a worthy result. 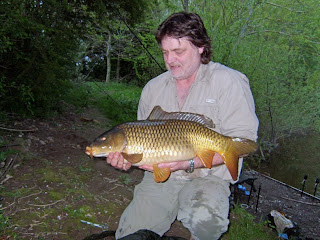 On my first trip I took a beautiful 17lb common and followed it up with the same big 'un that Neil had caught only this time it was a little smaller (something I am constantly reminded of) at 26.3. To my credit, I took it on an Avon rod, centre pin and size 8 hook, off the top on a dog biscuit. As the pictures show, that fish had quite an effect on me. 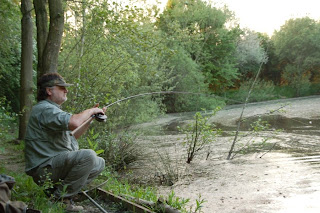 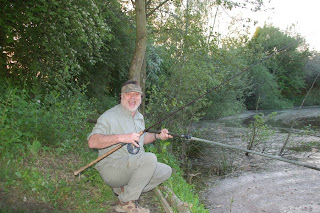 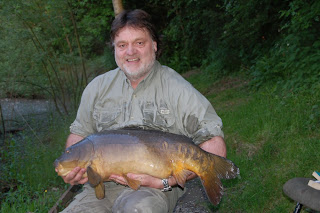 Last year I decided to 'take the lake apart' and to venture further afield in an attempt at upping my pb. I failed. The pond refused to play and all I and most of the regulars, caught were little commons up to about 13lbs. I think that some of the larger fish had gone either through otter predation, a regular problem there, or to poachers. Unfortunately the pond is near a main road but is secluded. I know of carp anglers in the area that are always on the look out for an addition to their own syndicate lakes, they are greedy morons of the lowest order and I wish them pain and misery.
But even that is a slightly better option than to be lost to a ravenous mammal that will eat only its heart and liver or hungry Eastern European. Our friends from the other edge of Europe abound in these parts and for them a fat carp is a meal - nothing more, just food. I shall say nothing more on this subject for now.
But carp are still featuring in my thoughts. The new river season begins in a couple of weeks but I am in no rush to start, there will be better sport in a couple of months time. Having said that, there was an earlier spawn this year so at least the fish will be recovered unlike the last couple of years when they have spawned after June 16th. I will no doubt have a dabble on the river but I shall also spend some time after carp this year and who knows where it will take me; I have plans for a venture that could be life altering. More of that later.
There was another pivotal moment in my angling life, a carp moment that occurred whilst in Spain last month. I shall focus on that next time.
Posted by Dave Burr at 15:40